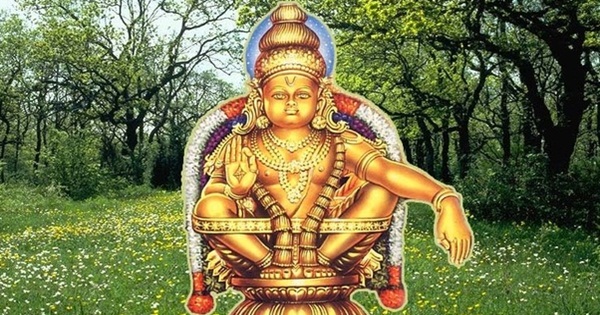 Did you know that Sabarimala is one of FIVE temples dedicated to Ayyappa, representing each ashrama of his life?

1.      At Kulathupuzha in Kollam District, He appears as Balaka or child and is known as ‘Manikantan.’

2.      At Aryankavu in Kollam District, Lord Ayyappa appears as a Brahmachari.

3.      At Achankoil Sastha Temple in Pathanamthitta District, the Lord is a Grhastha with his two consorts Poorna and Pushkala.

4.      At Sabarimala, the Lord is depicted in the Vaanaprastham or renunciate form.

5.      At Ponnambala Medu or Kantamala, the Lord appears as a Yogi. There is where the ‘Makaravilaku’ appears.

As you can see, He isn’t exactly a permanent Brahmachari in the general sense of the term, and Ayyappa is a Naishtika Brahmachari at that one Sabarimala Temple.

In fact at the Achankoil Temple he is represented as a Grhastha, with his two wives, Poorna and Pushkala. You can take His Darshanam there along with your female members all you want.

That is why, this ONE temple is dedicated to Naishtika Brahmacharyam.

A lot of people have confused “Brahmacharyam”, limiting it to just avoidance of sex. This forms the basis for the myopic and hare brained question asking why menstruating women can’t abstain from sex or carnal desires. They even go to the extent of asking “Why should your Brahmacharyam be disturbed if a woman is nearby?”. Well, your sense of “equality” got disturbed by seeing all the humble men mind their own business, aided by all the females in their family, and observe the vrtam. Why is your “faith” in “equality” so weak? And you’re telling me getting women inside Sabarimala is about testing the Brahmacharyam of the devotees?

That translates to “faithful or committed Brahmachari”, someone who lives abiding by the practices of Brahman (not the Braahman “caste”, but the attempt to access the Brahman or consciousness of the primordial energy”).

That is a person who refrains from ALL worldly pleasures, desires or attachments, be it material or emotional – including but not limited to restricting yourself to one meal of gruel a day, no smoking, drinking, alcohol, control of speech, no bed or footwear, and a host of other restrictions.

As mentioned earlier, this is the place where Ayyappa resides in Vaanaprastham, i.e. as a renunciate – Someone who has renounced all worldly desires.

And as noted in another answer here, the main purpose of having a particular deity with a certain form, is that the devotee tries to imbibe the attributes of the particular deity of that form into themselves. If God is worshipped in “many forms” they’re also attempts to bring that form inside us. I’ve written about that here too:

It is in this spirit, that the Sabarimala devotee tries to imbibe inside themselves, the persona of Ayyappa as a Naishtika Brahmachari in Vaanaprastham, as a renunciate. Over the course of the 41 days the devotee gradually renounces almost every worldly luxury, attachment and most importantly, ego and any sense of the “self”. That is precisely why, a Sabarimala devotee is addressed as “Ayyappan”, or “Swami”, or “Maalikapuram” respectively, denoting the fact they’ve become Ayyappa themselves, having imbibed inside them with their faith and discipline, Lord Ayyappa.

All this is meant not for the God, but for the devotee! Ayyappa is all powerful and doesn’t need any of your lectures on the strength of His celibacy.

It is that assault on the practice of that renunciation that devotees are protesting. By getting women of all ages in, it will become “just another temple”, losing its speciality as a monument to renunciation. That weakening of faith is the agenda that’s afoot.

Okay, what’s wrong if women too attempt to become “renunciates”? No problemo, except that this temple is for male renunciates and women who are incapable of the desire of motherhood.

For those who ask if there’s a temple for females exclusively, there’s for example:

1.      Kamakhya Temple in Guwahati. The Ambubachi Mela in June is a tribute to the female virtue of fertility and the process of menstruation. (so much for menstruation being impure in Hinduism!). Only females are allowed in the temple and for this period the temple is served by a female priest no less.

2.      Pushkar Temple in Rajasthan, the only temple to Brahma, is theoretically off limits to married men as they’re cursed to suffer marital problems if they enter!

Similarly, each temple has its own sthala puranam, mode of worship and tradition. It’s foolhardy to ask why one tradition cannot be replicated.

The very concept of Brahmacharyam means that you’re to be cut off from society as we know it. That is why the people you’ll find in the company of Brahmacharis, are other Brahmacharis, and that’s how it’s supposed to be. That’s simply because everyone likes being with PLUs. (People Like Us) in furtherance of a common objective or lifestyle. That’s precisely why you have “gated” housing being preferred in most cities, Brahmin agrahaarams in earlier days, and if you’re the Page 3 elite of Mumbai you’d want a house in Napean Sea Road or Malabar Hill.

However much you do social engineering, it will regress to some form of PLU-isation soon enough:) Brahmacharis are similar. Their renunciation means they have nowhere to go, but to be together with other fellow renunciates! And that’s who you’ll find at Sabarimala. As simple as that.

And by the way, if you REALLY believe in Ayyappa, how is it that you don’t believe in his Vaanaprastham or renunciate form?

If it’s about renunciation, how does the desire to “smash the patriarchy” or bring “equality” go along with that? You’re supposed to renounce all desires, including those of supposed “social justice”. So shelve that where it belongs!

Long story short, ask yourself this one question.

Why would anyone want to disturb a gathering of renunciates whose only desire is to try and discipline themselves, in an effort to bring out the Ayyappan inside them?

This article by the author was first published at Quora.