300 BC Book ‘Indica’ by Megasthenes Dispels Caste Theories of India

Indica is the book written by Megasthenes, the Greek ambassador to India around 300 BC. The book is lost, but various other authors quote his book. Another book with the same name, Indica by Arrian survives. Note the book is written as a military journal to know the country, hence the data has to be as “factual” as possible, to avoid errors in costly military strategies. Also it is an addendum (not the main subject) written as part of Alexander’s conquest.

As the main objective was on Alexander, there is no reason to fudge data about India. Alexander turned back from India after his peace treaty with Porus (As Porus was re-instated, it is a definite peace). Victor usually writes History for his advantage. As there is no victory or loss, as far as India is considered during Alexander’s conquest, the history recorded can be considered at best as a neutral and third party observation without any bias.

Purpose of writing Indica by Arrian:- 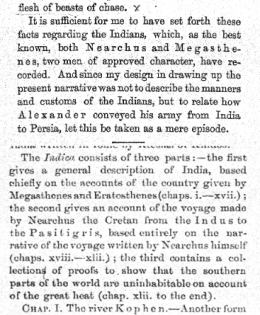 Important points in the book are:
1) No Indian ever went outside his own country on a warlike expedition, so righteous were they. 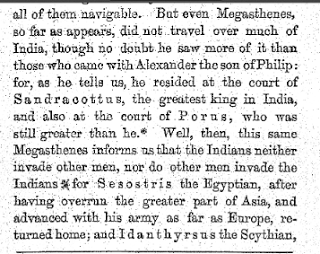 Why Indians did not invade foreign lands is clearly explained. A Sense of justice (Sarve jana sukino bahatu!) prevented any Indian king from attempting conquest! A conquest is a normal thing when a king becomes powerful. A king was prevented, only because, he was bound by the court, which was democratically representing society. So king could not push his wish. The society was influenced by “saints” who were in pursuit of “Happiness and God”. This proves, how checks and balances kept Indian society in greatest of the civilian order.

Indians/Hindus never tried to conquer other lands by force.

2) This was also remarkable in India – that all Indians were free, and no Indians were slaves. Humanity is enforced since 1000’s of years. This is not seen in any other country.

3) After several years, the royal rule was replaced by democratic city states, although there existed a few kings when Alexander invaded India. 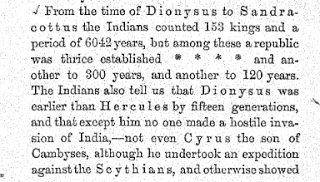 Why India is called the “Oldest Democracy/Republic”? Is this not a sufficient proof?

4) The Indian warriors regarded those engaged in agriculture and animal husbandry as sacred. Unlike the warriors in other countries, they did not ravage farms during war conquests. Moreover, the warring sides never destroyed the enemy land with fire or cut down its trees. 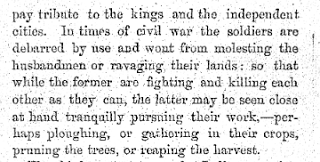 There was no destruction, even in war. Labour and food was respected by both sides, as they have to manage people post war.

5) The Indians generally were divided into seven categories, the wise men (Brahmins), farmers, herdsmen, artisans, soldiers, over lookers, and government officials including army and navy officers.

This busts the myth of casteism that the leftist talk today. Note there were only 7 classifications.
A) Brahmins – Neither masters, nor servants, exempted from all public duties, engaged by others to offer sacrifices and perform funerary rites, for which they received valuable gifts and privileges. At the beginning of the year, they make prophecies. A philosopher whose prophecy fails receives strong criticism and has to observe silence for the rest of his life, but otherwise incurs no penalty.
Brahmins were acknowledged as priestly class but were not in a position to make rules (like exploiting shudras, as it is made out today). Also no punishment to Brahmins and are exempted from public duty, like labour and war. This is what, Indian accounts also say about Brahmins.

B) Farmers/ Husbandsmen – Most numerous of all castes, exempted from fighting and other public duties. Regarded as public benefactors, and protected from damage during wars, even by enemy warriors. Pay a land tribute to the ruler, the official land owner (Property tax). In addition, they remit 1/4th of their produce to the state treasury. Tax was capped at 25%, unlike today’s 35-80% by modern Govts.

C) Herders – Animal husbandry is treated as sacred. Hunt and trap crop-destroying birds and animals. Note, they hunted animals that were engaged in damage to human habitat. They were raising animals normally.

D) Artisans and Traders (Vysya) – Create weapons as well as tools for farmers and others. People engaged in military service were exempted from paying taxes, and instead receive a maintenance from the state exchequer. 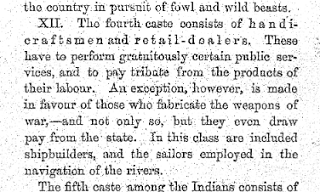 Artisans were supported by Govt. for the service provided to military. The life of artisans was secured. Traders/Vysyas held money power, but no support from public (man power) and no muscle power. So, they were not in a position to “Legislate”.

E) Military (Kshatriya) -> Second most numerous among the castes, Indulge in amusements and idleness during peaceful times, maintained at state expense, along with war horses and elephants. Army was used in peace times too. It was maintained by the govt. They were powerful physically, but played no role in making rules.

F) Overseers -They carried out administrative tasks.  Brahmins (as deemed today) were not the only people in administrative role. Any educated or talented person was inducted in administration. Education, sincerity and trust were main criteria, rather than their birth sect. 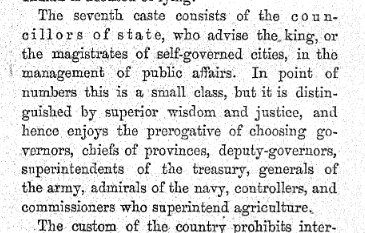 This class was derived from all other communities based on talent. They were a body of intellects with no physical power, money power or people power. So, they could gang up and exploit others. They acted as balancing power for other sects (Intellectualism of Brahmins, money power of Vysyas, Muscle power of Kshatriyas and manpower of artisans and farmers). This was the democratic body.

We can clearly see that, caste was used as “profession” and not a “jati”. As profession continued in hereditary style, it was equated as “jati” by birth. Note how, trade and caste (7 classification) explains the context of rules. In fact, caste was not related to religion at all. It was just a social stratification for division of labour (like a profession today). Indica also tells about marriage within a caste/trade. There was no dowry system – another feather of civilian society.

The division was so perfect. It was not possible for one group to dominate all others and exploit. The “perfect division” meant, optimization and rationalization of resources, labor and benefits. The optimization reduced burden and enabled low cost in manufacture, enabling competitiveness of the country. That was why India dominated world trade.  This was what Greeks learnt from India 1000s of years back.

The book busts “Manuvaadi/Brahminical/Castiest/Vedic” theories of caste in India. If Manu had prescribed 4 castes (Brahmin/Kshatriya/Vysya/Shudra), why there were 7 classification practiced in society?  Another important point is, the caste system survived the entire history of India. If caste system in India was exploitative, it would not have survived from Vedic age to Britishers, as farmer’s son would not continue to farm and a soldier’s son would not continue to be a soldier. It is not rewarding now (after Britishers, as they altered the dynamics), as farmers, soldiers, artisans, Brahmins do not want their children to continue the traditional profession.  The reward in Indian society was not at all materialistic/financial in nature. The reward for a labor was expected to be “deriving satisfaction in doing a karma”. It was more to do with meeting ones objective in life to derive “Happiness”. Since  family profession was giving more meaning and rewarding to individuals, the entire family, relatives, sect and society encouraged individuals to pick up the family trade. As India was a free society, nobody was forced in to a profession. This is true, as Megasthenes in his Indica, clearly indicated that there were no slaves and no forced labor in Indian society.

Due to mentioning of 7 classification (rather than 4 varnas used in casteist arguments) and documenting India as a free society, Megasthenes’ Indica expose “Britishers”, “Leftists historians” and Indian press, who repeatedly told the lie of “casteist system” to de-mean and subjugate Indian citizens. It is a shame, “Independent India” still teaches these lies in school even today, in spite of strong proof against the “exploitative caste theory”.

Actually the grouping has not changed much. Just look at the classification with modern names:-

Brahmins or “non-profit group” was the one that was exempted from taxation. All other groups were taxed (As they work for profit/income). This was the real meaning of Brahminic division. Another important point was land ownership. “Ruler/state” was true owner of land. Only tenancy rights was allotted. So, no land disputes, and no zamindari exploitation. Britishers altered this equation, so that private citizens could hold “land ownership” paving the path for land grabbing and hoarding. This is the root cause for corruption in the country.

Note, how, scope of group “G” is altered. What was a body with “talents” was replaced by vested interests. People with at least “one power” (muscle, men, money and intellectuals) can join the gang to gang up against the rest. This collusion allows exploitation of all other groups. Note how, incompetence is creeping in the societal order, increasing burden on people. The burden also means increased cost, enabling downfall of our country. Britishers employed this trick first in killing cotton industry of India. They levied heavy taxes and started disrupting the labor force. Indian hegemony in world economics nose dived from that point.

To regain the “Leadership position”, Indians should think of correcting “group G” again. It will set the social order back to optimal point. The optimal point will reduce the peoples’ burden and solve peoples’ problem. Most of the litigations are land disputes. If that is solved, huge burden and liability on Indian citizens gets solved. It will unlock the black money hoarded there for industrial development. This is the learning we should get from “True History” documented in Megasthenes’ Indica.

3. Most Authentic History of Attacks on India from 636 AD: Hindus Killed in Millions

What Is the Caste System? Why Was It Beneficial or Destructive to Hindu Society