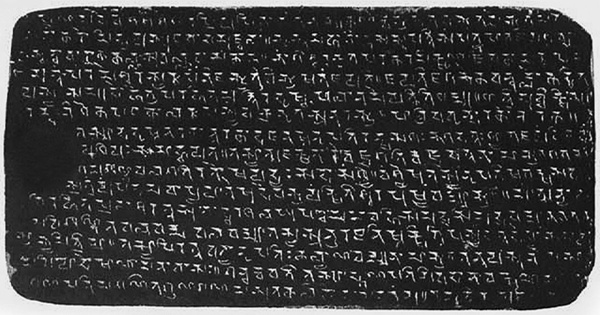 29 December 1912. Location: Nidhanpur, a village in the Sylhet District of Bangladesh. Nidhanpur, during ancient times, was part of the Kamarupa kingdom of Assam. On this day, while digging the soil for building a buffalo shed, a Muslim cultivator came across numerous copper plates. Surmising these plates to be the clue to some hidden treasure, he took them to a local landholder. The latter recognized the importance of the plates and notified relevant authorities in Silchar, now part of Assam. That’s how the precious treasure was discovered, leading archaeologists and historians know about the historicity of ancient Kamrupa, i.e. present Assam.

Bhabana Deka in Inscriptions as Sources of Early History of Assam mentions about clay seals of Bhaskaravarman in Nalanda. According to him, the seals may have been carried by the bearers of Bhaskaravarman’s letters to the head of the Nalanda University in connection with Hiuen Tsang’s visit to Kamrupa. Likewise, inscriptions from copper plates found in various parts of India further speak volume about the history of Assam.

King Bhaskaravarman of Kamarupa was also the ally of Sri Harsha. He was the most illustrious king of Assam. Here is the genealogy of the Kamarupa kings as depicted in the Nidhanpur copper plates:

Shodhganga, a digital reservoir of Indian theses maintained by INFLIBNET Centre, an autonomous Inter-University Centre of the University Grants Commission (UGC) mentions about the Varman dynasty of Kamrupa as follows, “Pushyavarman is credited to have laid the foundation of the Varman dynasty in Assam. The Doobi Copper plates of Bhaskarvarman clearly trace the lineage of Pushyavaran from the line of Naraka-Bhagadatta. The Nidhanpur grant also supports this view. The Varman line of kings founded by Pushyavarman which ruled for about three hundred years is therefore also known as the Bhauma-Naraka dynasty. According to the Nidhanpur Copper Plate grant of Bhaskarvarman there was a long gap of three thousand years after Vajradatta before Pusyavarman became the ‘lord of the earth.’”

“Altogether thirteen kings of this family ruled over Kāmarūpa. According to P.N Bhattacharya, Pusyavarman ruled in the middle of the 4th century C.E. and was a contemporary of the Gupta Emperor, Samudra Gupta. In the Allahabad Pillar inscription of Samudra Gupta, Kāmarūpa was a frontier kingdom along with Samatata, Davāka, Nepal and Kartripura, whose kings owed allegiance to the Gupta rule. It is believed that the ruler of Kāmarūpa during that time was Pusyavarman.”