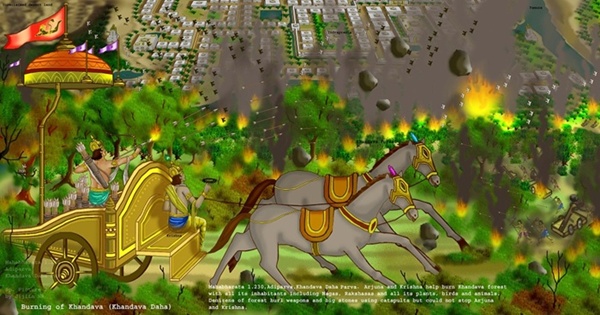 The infatuation with Mahābhārata made me a researcher of this huge Itihāsa, enabling me to create the website named AncientVoice containing 23,500 plus pages on topics related to the Mahābhārata, Rāmāyana, the Vedās and the Purānās. Influenced by the map of Bhāratavarsha found in one of the books in the ACK Mahābhārata series I started drawing similar maps and became an expert map-maker of Bhāratavarsha which is published in my own site AncientVoice and also in Wikipedia and numerous other websites world over and used as a reference by many researchers and university students.

As an artist, all the popular paintings I have made are based on the Mahābhārata theme.

The below one is a painting on the congregation of the sages headed by the ascetic Shaunak in the forest of Naimisha, where Ugrasrava Sauti the expert of Puranās, is narrating the Mahābhārata to them. Mahābhārata starts with this outermost dialog-frame setting of Shaunaka-Sauti Samvāda.  The dialog-frames inner to it are the Vaishampāyana-Janamejaya Samvāda, the Sanjaya-Dhrtarāshtra Samvāda and the Krishna-Arjuna Samvāda, the last one being the innermost dialog-frame which is well known as Bhagavat Gīta. 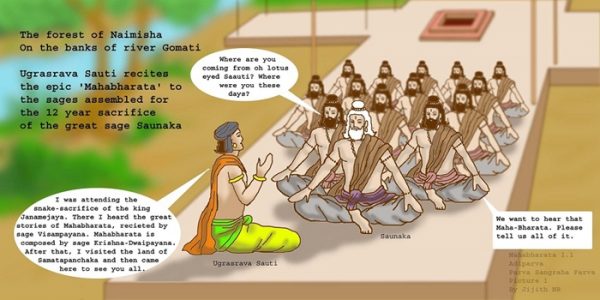 The painting below is the depiction of the narration of the creation of the universe, starting with the emergence of Brahmānda, the mighty cosmic egg, from which the infantile Brahma emerges. The egg is also called Mahādivya which was formed in the beginning of the Yuga. It contains the seed of all places, the invisible and subtle causes and the basis of both existence and non-existence. Brahma is also called the Prajāpati. 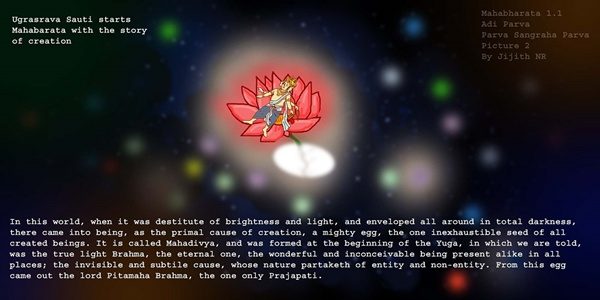 The following painting depicts the famous story of the birth of Mahābhārata, as its author, Krishna Dvaipāyana Vyāsa invokes Brahma, the creator and tells about his intention to author a great Itihāsa. Brahma suggest Ganesha as the scribe to write down the Mahābhārata as Vyāsa narrates it orally. This is narrative is not found in the Critical Edition of the Mahābhārata since it is a later interpolation. But this story is an important offshoot that emerged later, in the ever green tree of the Mahābhārata Consciousness. 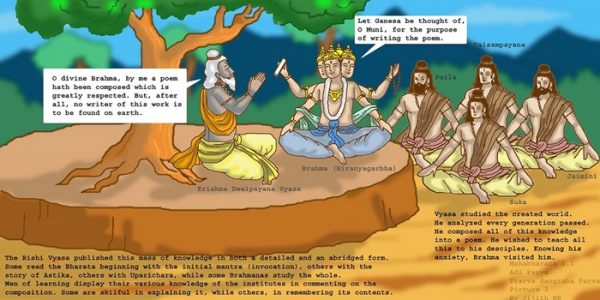 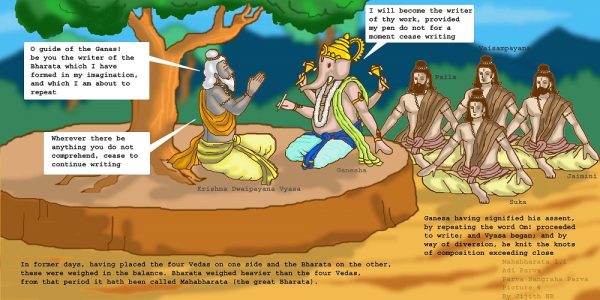 The following painting depicts the incident when king Janamejaya’s brothers attacked a dog which tried to trespass into the Yāga of Janamejaya which was taking place at Kurukshetra. As a result of this Jamejaya was cursed by Sarama, the mother-goddess of all the dogs. Jamejaya’s brothers are named Srutasena, Ugrasena and Bhimasena. 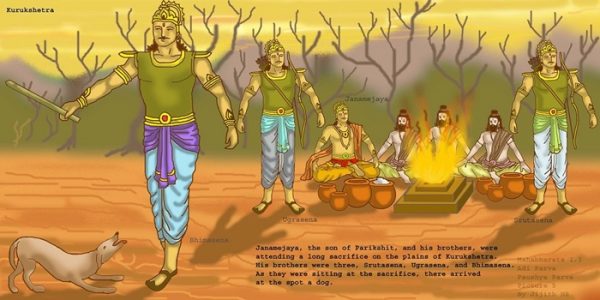 The painting below depicts how king Jamemjaya obtained a priest named Somasrava, who was the son of Srutasrava born to a Nāga women. Choosing Somasravas with the Nāga ethnicity as the priest of Kuru king Janamejaya, was part of harmonizing the antagonistic tribes of Nāgās and Kurus. 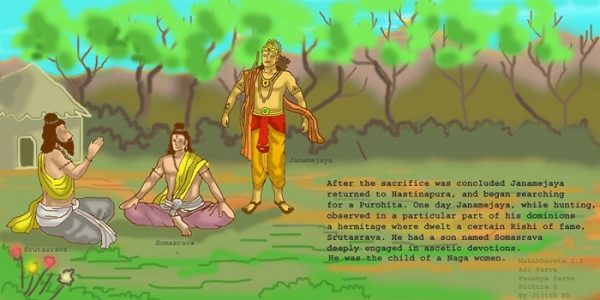 The following painting shows Somasrava in the palace of king Janamejaya, having appointed as the royal priest and getting introduced to his royal brothers. 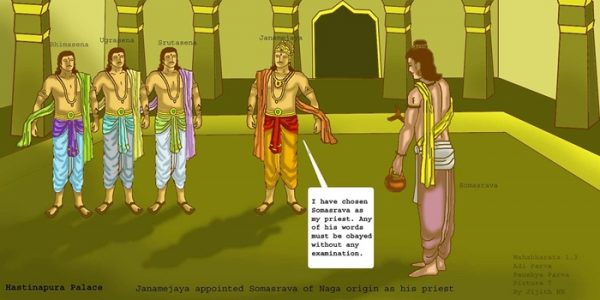 This follows the conquest of Takshasila, a city of Gāndhāra ruled by the Nāga chief Takshaka by the Kuru king Janamejaya. 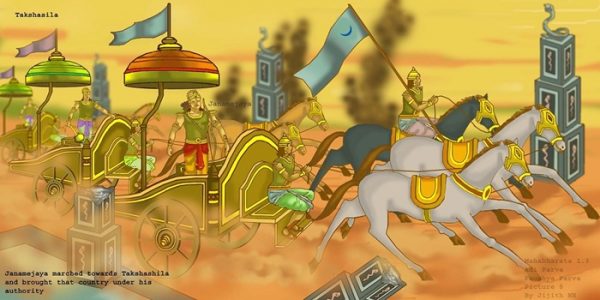 The painting below depicts Ayodha Dhaumya seated with his three disciples, viz. Upamanyu, Āruni of Pānchāla and Veda. 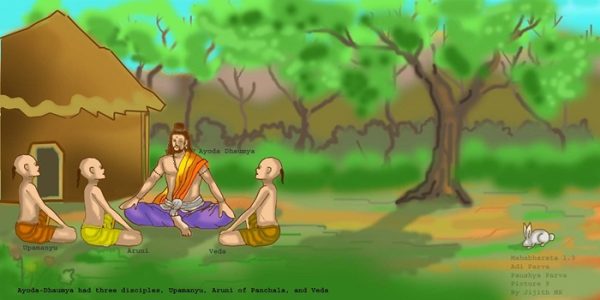 Āruni of Pānchāla is depicted below preventing a breach in the water flow using his own body. 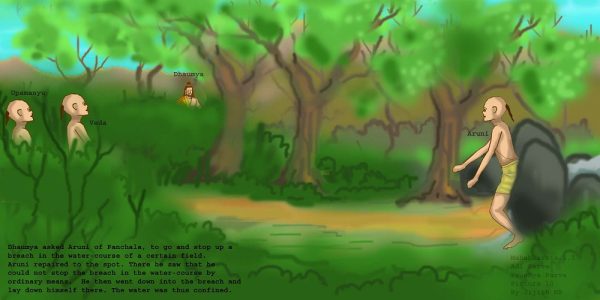 The following painting below depicts the new Kuru city named Indraprasta constructed by the Pāndavās with the help of Krishna. The city was whitish in color due to its white buildings. It was on the banks of the Yamunā River. To the south of it lied the Khāndava Forest, which was ruled by the Nāgās headed by Takshaka. The city had many watch-towers and bridges to cross Yamunā River. To the bottom left, Krishna and Arjuna are depicted engaged in a dialog as they often discuss many things including high philosophy. One such dialog during the Kurukshetra War was what became known as the Bhagavat Gīta. 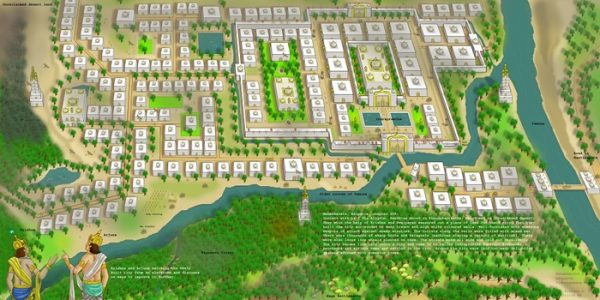 The following painting depicts the burning of the Khāndava Forest by Krishna and Arjuna. It is this burning which destroyed the Nāga settlements in Khāndava that finally resulted into the enmity between the Nāgās and the Kurus, especially the descendants of the Pāndavas like Parikshit and Janamejaya. Takshaka fled from Khāndava and established himself at Takshasila where he schemed against the descendants of the Pāndavas. When Arjuna’s grandson Parikshit was ruling in Hastinapura, Takshaka killed Parikshit. This resulted in the revenge of Parikshit’s son Janamejaya who conducted a massacre of the Nāgas. Thus the circle of violence continued. Later this enmity was settled by sage Āstika born to a Nāga women. Since then, the Nāgas and the Kurus lived in harmony in Hastinapura and Takshasila. 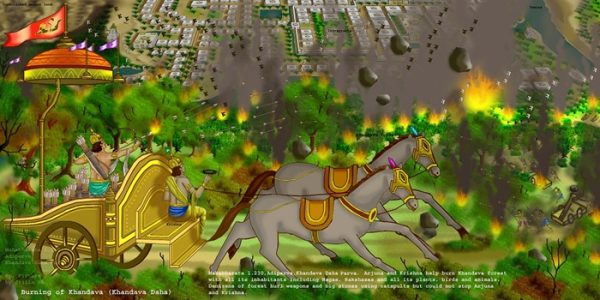 The painting below shows the new Sabha constructed by the Dānava Architect Maya who was an ally of Takshaka. After the defeat of Takshaka by Arjuna at Khāndava, Maya Dānava became an ally of the Pāndavās and constructed this amazing palatial hall (Sabha). This hall had many properties like reflective floors that appeared like the surface of water and lakes with crystal clear water that appeared like walkable floors where there is no water. This confusion caused Duryodhana to fall into a pond as he thought that it was a floor where there was no water.

Again, Duryodhana walked over a floor where there was actually no water but thinking that water is there he lifted up his lower garments and walked. All of this was amusing to Bhima and Pānchali who watched Duryodhana’s follies from the upper floors. Daupadi laughed out loudly at the follies of Duryodhana. This enraged Duryodhana and resulted in the game of dice where Draupadi was dragged and disrobed, leading into the 12 year forest life and the 1 year life of anonymity of the Pāndavās and finally culminating into the Kurukshetra War. Thus, the entire Mahābhārata is captured in the picture below. 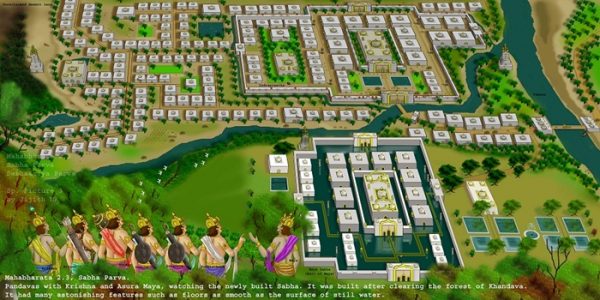 The following painting captures the interior of Maya Sabha. Here king Yudhsisthira is seated as the emperor of Bhāratavarsha with his four brothers seated along with him on both sides. All the kings of Bhāratavarsha are present in this Sabha in the front rows.

Krishna and Balarāma with the heads of Vrishni-Yādavās are present along with ascetics like Krishna Dvaipāyana Vyāsa and other ascetics hailing from all the corners of Bhāratavarsha. Pānchāli and other royal women are shown in the balcony watching the proceedings. Prominent Brāhmanas, Vaishyas and Shudras of the whole nation also is present. This last picture thus depict the whole of Bhāratavarsha fully represented by its people and is similar in nature to our Parliament with its Lok Sabha and Rajya Sabha. 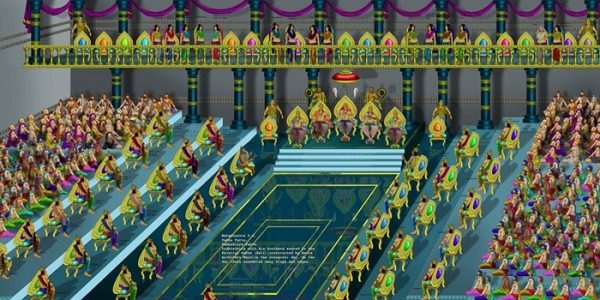 This final picture which I have drawn in the Mahābhārata series, fully completes this series as it depicts the political unity of Bhāratavarsha and also represents the current political unity of our nation whose two names are India and Bhārata. This way the Mahābhārata is akin to the geopolitical manual of Bhāratam Rāshtram, suitable for both its past and the present. This great Itihāsa is thus similar to the Constitution of India. In other words, I depict the Mahābhārata through these painting-series as the Sanātana (Eternal) Constitution of Bhāratavarsha aligning well with the Sanātana Dharma.

This picture depicting the interior of Maya Shabha shown above is very large and detailed but is shown reduced in size. Below are some of the interesting parts of this big picture. 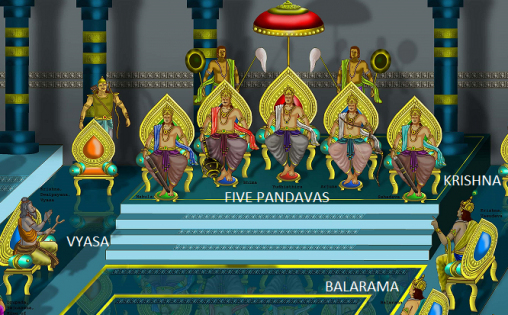 Shown below is the Gandharva Tumvuru performing in front of king Yudhisthira, a part of the big picture.

The following is another portion of the big picture where you can see some of the kings of Bhāratavarsha seated in the Sabha. Some of them like the the Asura Jata are having the honorific title ‘Asura’ before their name. He was the king of the Madrakas. The Daitya and Dānava kings kept the title Asura before their name while the kings who followed the path of Ādityās dropped the honorific title ‘Asura’ from there name. In later Purānic literature, these Asuras were demonized. They were originally the Avestan speaking fair-skinned forefathers of modern-day Iranians.

In most of the traditional paintings, the Asuras are depicted as dark-skinned often depicted as aborigines of India, which is wrong. They are indeed fairer in complexion than the Kuru kings of Bhāratavarsha and spoke other Indo European languages like Avestan instead of the Samskrit language which spread in Bhārata. Daityās, Dānavās and the Rākshasas are mentioned as fair complexioned, handsome and beautiful in Mahābhārata and Rāmāyna. When I depict them, I go by this original description. 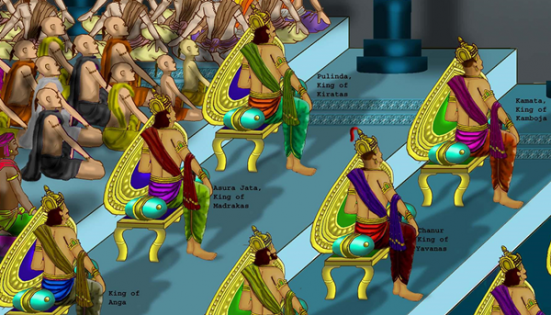 I am mostly known in the professional circles as a technical expert and a creative director working in the field of Virtual Reality and Mixed Reality, two new emerging technologies of the 21st century. This is what I do as part of my profession as I work as the Creative Director in one of the leading MNCs headquartered in India. This profession itself is tailor made for me who is basically an artist at core. Besides my belief system is centered on Advaita Vedanta which enables me to see the alternate realities generated by these technologies as a new expression of the Vedantic Māya.

Shown below is not a painting but a map which is the product of the same endeavor which resulted into my series of painting viz. the study of Mahābhārata. This map of Bhāratavarsha is another expression of the painting of Maya Sabha above, but instead of the people representing the nation in the style of a parliament, it is depicted as a geopolitical map. It shows all the kingdoms of Bhāratavarsha from which kings came to be present in the Maya Sabha of emperor Yudhisthira. 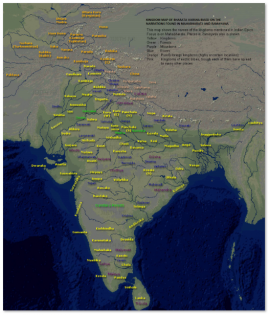 Below is a much detailed map showing the places (villages, towns and cities) in each kingdom along with the kingdoms of Bhāratavarsha:- 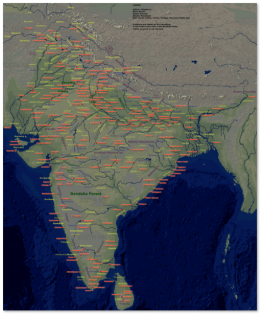 I started my drawing and painting at the age of 6, starting with drawing cars, trains and motor cycles. Those elders who have seen my drawing noticed one thing which they told me later that, when other children draw a car in two dimensions, I draw the car differently in three dimensions, understanding the concept of depth. I don’t have those drawings with me now, but conceptually it looked like as shown below:-

Starting from the age of 10, I became an avid reader of books. The Amar Chitra Katha (ACK) series of comic books were my favorite books. I was heavily influenced by the Mahābhārata series published as part of the ACK Pi-Co Classic books. I started drawing the images of the characters of Mahābhārata. I sketched those using black pencils, color pencils, sketch pens, crayons and painted them using water color and oil paint. This improved my drawing and painting skills tremendously. I attended painting competitions and often bagged the first price. I represented my school, my town and my district in state level competitions. In 1991 I won the state-level first prize for painting at the high school level competition, competing with every other high-school level artists in Kerala.