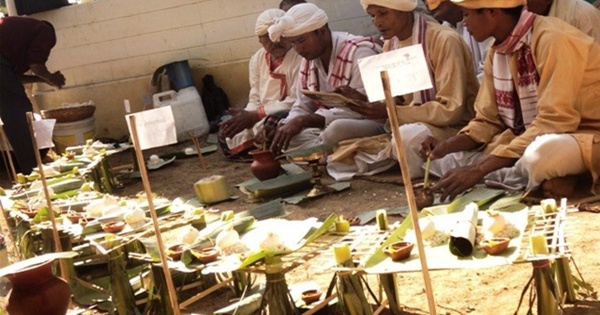 Every year 31st of January is celebrated as Me-Dam-Me-Fi festival in Assam by the Ahom Clans in the memory of the departed souls. “Me-means offerings, Dam-means ancestors and Phi’ means Gods and so Me-Dam-Me-Phi means oblations offered to the dead and sacrifices to Gods. This festival is basically associated to bring blessings for the living generation so that they can survive evil and live in peace and prosperity.

According to mythological stories running around this festival, the Gods of Heaven summoned as Lengdon (Indra) had sent his two grandsons “Khunlai” and “Khunlung” to earth.  Gasingpha, the God of knowledge suggested “Khunlai” and “Khunlung” to perform Rikhan, Me-Dam-Me-Phi, Phuralong and Umpha on different occasions in various months for the well-being of the people on earth. Me-Dam-Me-Phi signifies the beginning of these celebrations.

But then history has its own stories and evidences about this festival. It is being mentioned in the Suhungmung that Dihingia Raja had performed this festival after his troupe defeated the Kacharis and captured Dhansiri valley back in 1563. Further, Sukhampha performed this embarking his victory over the Koch kings and Susenghphaa performed it twice after defeating the Mughals in 1606 A.D and 1615 A.D. The third time however this festival was performed for seeking blessings after being defeated by the Mughals.

There are evidences that Raja Chakradhwaj Singha performed Me-Dam-Me-Fi to save his kingdom since during his reign his troupe had lost many battles against Mughals. During Raja Lakhi Singha’s reign, a mishap happened where a wooden beam suddenly collapsed in the royal court and the astrologers forecasted it to be some bad omen for the kingdom. So, Raja Lakhi Singha performed this festival for pleasing the Gods.

Snippets from history show that King Chandrakanta Singha after cremation of his brother Kamaleswar Singha at Charaideo performed the Sraddha rituals under a Nuni tree by giving alms to the Brahmins and performing Me Dam Me Phi for the shanti of his brother’s soul. Thus, history from the Ahom dynasty of Assam has evidenced various stories running around this festival but all for the cause of maintaining peace and harmony in the society. Till date this festival is being performed with the same pious feeling all over Assam.

During this festival, the Ahom priests summoned as Deodhai and Bailung perform the rituals by spelling sacred Tai mantras and chants called Bidhan from sacred books Banfi and Phralung. Ahoms believe that a man after death remains as Dam (ancestor) only for a few days and soon he becomes Phi (God).

Further, it is believed that the soul of the deceased which is immortal unites with the supreme soul and showers good omen and blessing to their family. Hence as a symbol of gratitude for the ancestors who bring goodness and harmony to the family, the family members establish a pillar on the opposite side of the kitchen (Barghar) which is called Damkhuta as memorials where they worship their ancestors with various offerings of home-made wine, maha prasad along with other delicacies.

Hence, Me-Dam-Me-Fi festival signifies the belief on supreme power, the passing on of the information from one generation to another and a feeling of brotherhood and unity among the new generation.