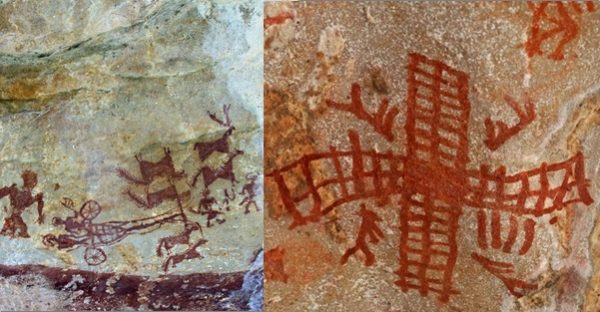 A drawn image of ‘CHOPAD’ was discovered at the Chaturbhuj Nala sites, near Gandhi Sagar in Bhanpura, Madhya Pradesh. This shows cognitive mental development and sound mathematical and reasoning abilities at least as old as human beings itself. It is called Chaupar / chopad / chopat in Western Indian region and played even now.

A 10,000+ year old rock painting showing cart with wheels in the Chaturbhuj Nala sites also prove that wheels were invented in India.

The Chaturbhuj Nala sites extend over several miles on both sides of the small tributary to the Chambal River. Rock art is strewn along both sides of the river. The Rock Arts Society of India (RASI) stated that the “longest chain of rock arts in the world” is situated here. Former RASI secretary G L Badam, who is an internationally acclaimed paleontologist had told Times of India, “Nowhere in the world has anybody come across such an extensive chain of rock arts with little interruption. What’s exciting is most petroglyphs are intact.”

The paintings in Chaturbhuj Nala sites date back to thousands of years before the Christian era. Most of the paintings are in shades of red and portray animals, geometric patterns, nature, and events from daily lives. According to Bradshaw Foundation, the paintings themselves extend over a very long period of time (nearly 10,000 years, since the Mesolithic) and exhibit marked stylistic and thematic differences.

Board game or chaupar is a very similar but more skilful, complex and older game called Chausar, There are no standard rules, but Masters Games has compiled a typical set of rules that should be enjoyable. Play is the same as Dus Pachisi with the following differences:

Three long dice are used instead of cowry shells. Each long die has 1 and 6 on opposing faces and 2 and 5 (or sometimes 3 and 4) on the other faces. There are no graces or extra throws. Castle squares are absent or, if played upon a Pachisi board, are ignored. Pieces start on specific squares instead of the Charkoni although captured pieces are returned to the Charkoni. To prepare to start the game, position each set of four pieces on squares 6, 7, 23 and 24 from the Charkoni.

Pieces can be melded together to form “super-pieces”. If two pieces of the same shade land on the same space, then those pieces are lumped together and thereafter play as a single piece with double the power. Triple and quadruple pieces can be formed in the same way. Conglomerate pieces move using the throw of the dice as if they were a single piece. However, a double piece can only be captured by a double, triple or quadruple piece, a triple piece is only vulnerable to a triple or quadruple piece and a quadruple piece can only be captured by another quadruple piece. Each throw can be split into its constituent parts and shared across the pieces. For instance, if a 1, 2 and 6 is thrown, a player might choose to move one piece 9 squares or three pieces 1, 2 and 6 squares respectively. It would also be possible to move a piece 2 squares to form a double piece and then move the double piece 7 further squares, for instance.

According to a Bradshaw Foundation article, several main periods were determined, including 12 styles in the rock art paintings at Chaturbhuj Nala sites. Styles 1 and 2 belong to the Upper Palaeolithic, down to about 12,000 BP. Styles 3 to 5 cover the period from the early to the late Mesolithic (from roughly 12,000 to 6,000 BP). Style 6 covers the transition between Mesolithic and Chalcolithic (about 6,000 to 5,000/4,000 BP), with a simplification of the images. Styles 7 to 12 would belong to the early, middle and late Historic period.

Chaturbhuj Nala rock art site provides an invaluable record of the cultural beliefs and practices of the local people of ancient India.

2. The Rules of Pachisi and Chaupur.