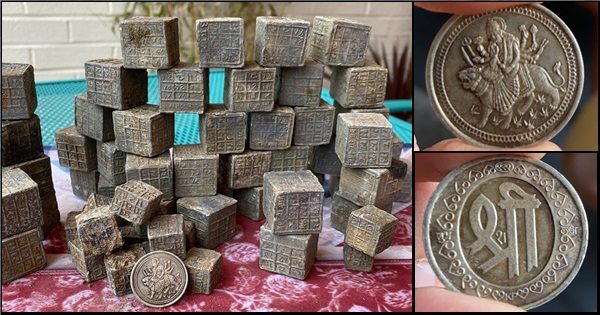 We are familiar of how under-water and land excavations have led to the discovery of many unknown facets of the historical past dating back from a hundred to many thousands of years. And magnet fishing is an added entry to the unearthing of interesting artefacts of the past. Recently, amid the Covid-19 pandemic that has brought the world to its knees, a magnet fisherman discovered something from the waters in England that invited interpretations from world citizens.

An archaeological analysis by experts is yet to be underway. Will Read, a magnet fisherman, along with his two sons found 60 inscribed cubes and a silver coin in a river in Coventry in England. These cubes in lead are inscribed with numbers and letters and the coin has an image of Mahisasur Mardini on one side and Shri with Shubh Labh inscribed on the other side. 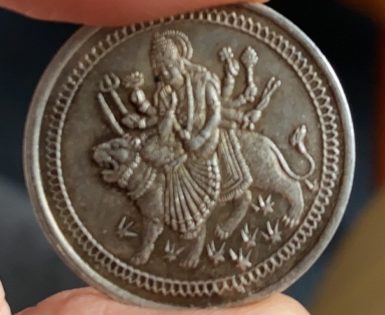 Coventry is a metropolitan region built on the River Sherbourne in England and the United Kingdom. The river is mostly seen as a canal and remains hidden by the city infrastructure.  The river originates in Allesley in Coventry and joins River Sowe, a tributary of River Avon, both in England. The discovery of the inscribed cubes and the coin in a river in England is intriguing!

How did these artefacts find their way into the shallow waters of England? Did anyone throw them there? Were these kept hidden somewhere in England and found their way into the waters? Were these smuggled out of India to England during the colonial rule? Or were these relics bought from India and taken to England by a British? More questions will keep on popping up. It will remain a mystery unless experts solve it. While the lead inscribed cubes look older, the coin, given the finishing, maybe of a later period. 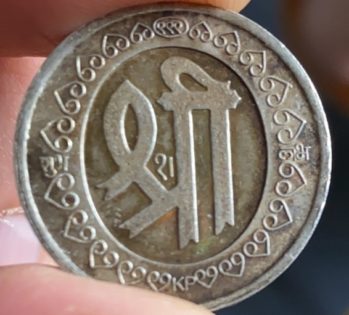 Magnet fishing is generally followed as a hobby that involves searching of ferromagnetic objects in outdoor waters. These objects are pulled out with a strong neodymium magnet. Many including celebrities pursue this hobby to also hunt treasures and save the environment. In the recent past magnet fishermen removed debris from water bodies in city and town areas.

Will Read, a 38-year-old magnet fisherman from Finham in the Coventry area, along with his sons were searching for ferromagnetic objects, sifting in the shallow waters in a river. Magnet fishing was their daily activity during the lockdown period. What they found were lead blocks, which they first thought were debris and then they thought these were tiles or rock pieces. Not one or two or a dozen, but sixty! 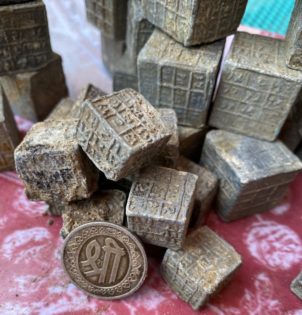 To quote Will Read regarding the discovery, reported in Coventry Live, “We were out magnet fishing as our daily activity in lockdown and we were at a relatively isolated spot. At first, we found keys and pennies and other bits and bobs, and then we looked down and saw what we thought were tiles.”

Initially, Will Read found few cubes. He then found more of the lead artefacts appearing as he sifted his magnet fishing bait in the shallow waters. Will Read collected all and then set them into neat grids. The second day, he again went to the same spot and discovered the silver coin. Each of the inscribed cubes is small enough to be held between a finger and thumb. Each cube weighed 125 grams. The cubes are completely identical; the only difference is that only one side of the cube displayed a dissimilar inscription. 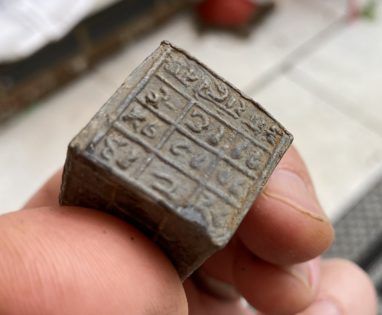 Unable to decipher what these artefacts actually are, Will Read, as reported by Coventry Live, not only streamed live on Facebook but also posted the images of the cubes seeking opinion from the viewers. Read did come to a conclusion that the artefacts are Indian in origin.

So, the news portals that covered this discovery came to certain conclusions regarding the 60 inscribed cubes and the coin, which is also based on the opinion of the viewers through their comments. That

1. The inscribed cubes might be connected to a Hindu prayer ritual.

2. They are Indian in origin.

3. Show incantations for prayers which take effect when they are thrown in running water.

4. Supposedly are Jyotish tokens that contain a numerical formula, summoning the protection of Rahu graha.

5. Numerals are Indian wherein all rows, columns, and diagonals add up to 36, which makes a magic square.

6. They are Navagraha Yantras dedicated to the nine planets.

7. Beeja mantras inscribed in the cubes. To quote report by interestingengineering.com,”The words on the bottom are some form of either: om raam rahave namah om raag rahave namah or simply, om rahave namah. These are called Beej (seed) mantras.” 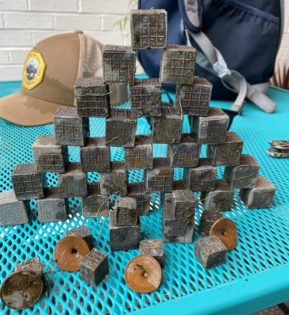 Vedveer Arya, author of Chronology of India and who has studied epigraphs and inscriptions, said on this discovery, “The haul of Indian cubes with inscriptions found in Coventry River is very interesting. The script and the images on some coins clearly indicate that these cubes were made in the 19th century. Undoubtedly, these cubes are planetary yantras used by Indian astrologists in the 18th and 19th centuries. Most probably, a British national of the 19th century had carried these cubes to England as his personal collection but his descendants might have found these cubes having no use for them and thrown them in the Coventry River.”

The discovery of the cubes still remains a mystery. The dating of the inscribed cubes isn’t known. A final conclusion can be drawn only after experts study them.