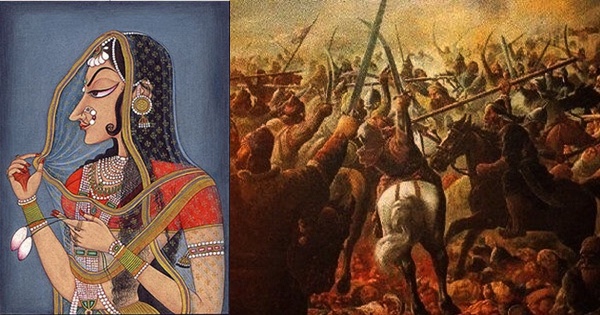 Not many are familiar with the one-sided love story of Firoza and Jalore Rajput prince Biram Dev. Firoza was the illegitimate daughter of Alauddin Khilji, the Sultan of Delhi. Biram Dev was the son of Rajput (Songara clan) king Kanhadadev of Jalore, Rajasthan. It was a one sided love affair by Firoza. The Sultanate princess’ mother Aasmani Khavas was a female attendant at the Sultan’s harem.

During that time, Khilji annexed few small and big kingdoms into his empire. But he could not annex Jalore though it was a small kingdom. Furthermore, Alauddin Khilji planned a military expedition to Gujarat – to attack Karnade, the king, loot and plunder the state, and destroy temples. He sent envoys to various kingdoms to facilitate safe passage for his army enroute from Delhi to Gujarat. All the kings agreed for the safe passage, except Kanhadadev, the king of Jalore. According to Padmanabha’s Kanhadade Prabandha, Kanhadadev did not trust Khilji. He felt Khilji’s army, while moving through his kingdom, might  involve in destroying the villages, enslaving women, looting, killing people, and torturing cows.

Alauddin Khilji invited Kanhadadev to his court on some occasion. Kanhadadev sent his son Biram Dev on his behalf. Khilji welcomed Jalore Rajput prince Biram Dev, but his intentions were dire. Biram Dev was an arm wrestler par excellence; he was known far and wide for his skills in the game. Khilji provoked Biram Dev for a wrestling match with his ace wrestler Punju. The Rajput prince agreed.

Khilji authorized Punju to injure Biram Dev to death during the game. The arm wrestling match started. The handsome, striking, and valorous Jalore Rajput prince easily defeated Punju, who was the strongest court wrestler of the Sultan. Meanwhile, Firoza, who was witness to the game, fell in love with the Rajput prince. After the game was over, she approached Biram Dev and proposed him for marriage. Biram Dev refused the proposal. Firoza then approached her father and made it clear that she would either marry Biram Dev or remain unmarried.

Alauddin Khilji asked for Biram Dev’s hand in marriage with his daughter Firoza. At the same time, Khilji also pointed out that to marry Firoza, Biram Dev should convert to Islam. The Jalore Rajput prince pretended to agree and said he would come back with a marriage procession. He sought some time for the preparations.

Meanwhile, Khilji sent a huge army under the commandment of Ulugh Khan and Nusrat Khan to Gujarat. According to Padmanabha’s Kanhadade Prabandha, Khilji’s army started looting and plundering Gujarat. Karnade, the king fled his capital. The army destroyed the city’s forts and temples. A Rajput chief in Gujarat Batada offered stiff resistance, but he was defeated.  The Muslim invaders converted the city’s temples into mosques. Ulugh Khan and his army sacked the Somnath temple. The priests and people who offered resistance were all killed. The invaders looted the treasury and started their return journey to Delhi along with the Shiv Ling. They planned to smash the Shiv Ling in Delhi. They had also taken hundreds of thousands of Hindus as slaves from Gujarat.

Jalore, also known as Suvarngiri, was ruled by different dynasties over time. Worth mentioning are Gurjar Pratihars in 8th-9th centuries, Parmars in the 10th century, followed by Rajput Chauhans. Songara Rajput prince Kirtipal (the youngest son of Alhana, the Chahamana ruler of Nadol) captured Jalore from the Parmars in 1181. His grandson Uday Singh recaptured Nadol and Mandor from the Muslims besides giving a stiff resistance to Iltutmish’s invasion of Jalore in 1228. After two more successive generations, Kanhadadev became king of Jalore. His sons Biram Dev and Maldev helped him in the administrative affairs of Jalore.

Here is a saying about Jalore: “Let the sky be torn, the earth turned upside down, let the iron armor be cut to pieces, body fighting alone, but Jalore would not surrender.”

Biram Dev denounced Khilji’s marriage proposal as soon as he reached Jalore. During the same time, Khilji’s army was returning to Delhi carrying the booty including the Shiv Ling and the imprisoned. Though Kanhadadev had refused passage of the army, the latter ignored the refusal. They entered Jalore and camped for the night at a place called Sakarana (present Sankarna). The king expressed displeasure over their camping in his territory. He also learnt how they sacked temples in Gujarat and had imprisoned Hindus. Kanhadadev sent a huge army to attack the Muslim army. Jalore army succeeded in defeating the enemy. They snatched the booty along with the Shiv Ling and set free the Hindu prisoners.

An irate Alauddin Khilji sent an army under the commandment of General Nahar Malik and Bhoja to attack Jalore. They first laid an attack on Sivana fort. The Rajputs laid a stiff resistance, defeating the invading army and killing its generals Nahar Malik and Bhoja. Khilji laid another attack on Sivana fort. This time Khilji won. The brave Rajputs died fighting in the battlefield while the Rajput women inside the fort performed jauhar to save themselves from being caught and disgraced.

Khilji then sent a huge army under Kamaluddin Gurg to besiege the fort of Jalore. The Rajputs valiantly resisted the attack. The battle continued for 2 long years without fail.

Kanhadadev and Biram Dev breathed their last in the battle, defending Jalore. Many Rajput women performed Jauhar, following the king’s death. Instead of getting dishonored in the enemy’s hands, the brave and virtuous Rajput women preferred to be burnt to ashes. It was the year 1311.

Khilji’s army ransacked the entire fort of Jalore, killed all Hindus and razed temples to the ground. He searched for the Somnath Temple booty and the Shiv Ling, but could not locate them. Later, Khilji converted the ruined fort into a Muslim monument.

Do you know Maharana Pratap’s mother Jeevant Kunwar was a Songara Rajput from Jalore? Our homage to the Songara Rajputs who perished defending Jalore and the brave Rajput women who performed Jauhar.