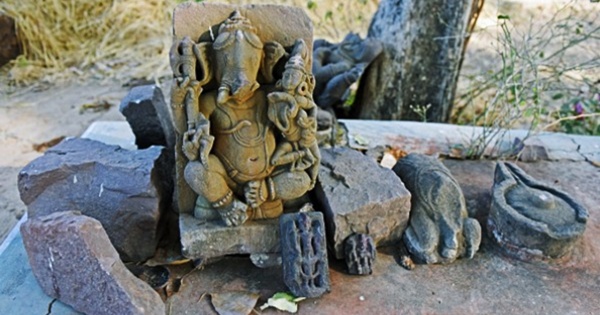 The world of heritage and antiquities has changed drastically in the recent past.

2. The United States (US) and Israel walked out of the United Nations Educational, Scientific and Cultural Organization (UNESCO) last month. Israeli Prime Minister Benjamin Netanyahu said “…UNESCO has become a theater of the absurd. Instead of preserving history, it distorts it”.

3. Many countries have passed updated and strengthened legislation to deal with emerging challenges of heritage preservation – challenges that didn’t exist a decade ago.

Closer home, India is seeing a renaissance in Indic pride. Not just in temples and monuments, but in the larger view on civilisational continuity (languages, education, values, culture and so on). When theghats of Ayodhya were lit up for Diwali, its glow figuratively reached the corners of the globe. The inauguration of Adiyogi Shiva’s murti at Sadhguru Jaggi Vasudev’s ashram was a huge symbol of India’s reconnection with its civilisational pride.

Prime Minister Narendra Modi himself is the first Indian head of government to demand centuries-old, stolen Indian heritage from the US, Canada, Germany, Australia and other nations.

In light of the (a) global, and (b) Indian restatement of outlook towards heritage, the Indian government proposed a new Antiquities Bill 2017. The Bill was analysed in isolation recently. However, “good” is subjective. A proposed bill should rather be analysed and compared against benchmarks and globally accepted standards.

While many countries have introduced updated legislation on the topic at hand, the closest, both geographically and civilisationally, is Pakistan. Here is a relative assessment of how India’s Antiquities Bill 2017 fares when compared with Pakistan’s KP Antiquities Bill 2016. 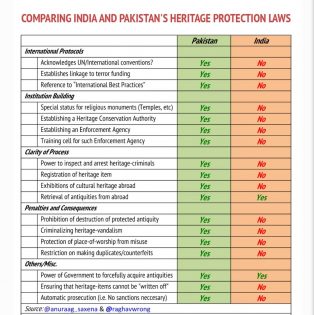 As proud Indians, one wonders why we cannot frame laws that are as strong as Pakistan’s? On one hand, we wax eloquent about “Incredible India” and “Atithi Devo Bhava”. On the other, we bluntly refuse to protect our heritage. It is left to private activist groups to run campaigns like #SaveOurGods because the laws don’t do so. While India engages in platitudes, Pakistan goes ahead and builds world-class legislation.

We had the chance to proudly go to the world and claim our rightful place – as one of the oldest civilisations, one that ensures continuity through its heritage.

We could have gone for vishwaguru. Instead, we chose to stay two steps behind Pakistan.

This article was first published at swarajyamag.com. Raghav Pandey, a research fellow with the Department of Humanities and Social Sciences, IIT Bombay, Mumbai, is the co-author of this post along with Anuraag Saxena. He tweets at @raghavwrong.

Anuraag Saxena is based in Singapore and leads India Pride Project. He has been featured/published in BBC, Economic Times, Sunday Guardian, Doordarshan, Man’s World, Swarajya, and Organiser. He is passionate about Indian heritage and culinary-history.