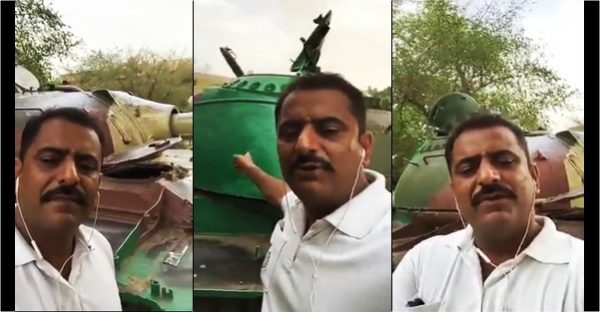 The Centre had asked the Security Forces not to launch operations in Jammu & Kashmir during the holy month of Ramzan so that it’s observed in a peaceful environment. Was this decision by the central govt just? Do our soldiers deserve this? Attack by terrorists, stone pelting, border ceasefire violations are but humdrum incidents in the Kashmir valley. And even after ceasefire has been declared violence continues in the Kashmir valley. It is the soldiers there whose lives are at stake.

A soldier posted in Kashmir appeals to the govt. through a video to take back the ceasefire order. As he starts to speak with a Namaskar and Jai Hind, he shows a famous patton tank built by America. It belonged to Pakistan and the country boasted of its strength of possessing several patton tanks. During the 1971 war between India and Pakistan, the brave Kuldeep Singh Chandpuri and his team of our jawans destroyed the entire patton tank regiment of Pakistan. 90,000 Pakistani soldiers surrendered with their weapons. That was a pride moment for India.

Our brave soldier continues to say in the video, “What was the result of that victory at war by India? The political leaders then signed a treaty and returned all the 90,000 prisoners of war including Pakistani territory won by India. The same is happening again today. Since the last one year, the security forces of India including BSF, SSB, CRPF, Indian Army, police jointly created a rage in Kashmir, carrying out intensive operations and eliminating terrorists. Many militants fled and started hiding in their secret hiding places. Their resources were drained. But Mehbooba Mufti ji now played a trick in the name of Ramzan requesting the central govt. to declare ceasefire in Kashmir to facilitate a peaceful environment in the region.”

“How could the Home Ministry and PM give in to her request? How could they fall in her trap? The govt. declared ceasefire. Result? Terrorists are attacking us with grenades. One of our jawans was martyred as a result of stone pelting. Encounter is on. This is the result of facilitating peace!”

“Few people said that the Army will retaliate. Friends, have you ever stood in front of an attacker? Attackers are always at an advantage. They get more time. In 10 seconds, 30 shots can be fired from an AK 47. How can one retaliate? When one is alive! If one grenade is thrown, all will die within a circumference of 9 feet. So, you expect us to retaliate then after they attack?”

“Till today, we were at an advantage. Following our search operations, we killed many terrorists. But now because of ceasefire, they will openly roam in the lanes and streets. They will threaten the civilians. They will openly kill our jawans. But in the name of ceasefire and Ramzan the govt is only helping them to cope up and reinstate their power in the valley.”

“Because of ceasefire our jawans are martyred in the hands of terrorists. The govt is ready to let more jawans get martyred. Even if one jawan of Bharat dies, whose son is he? Friends my objective in showing this video footage is to appeal that the govt. should take back the ceasefire order. Not a single jawan is ready for ceasefire. Operation All Out should not be stopped.”

“Who is keeping a fast? If they had kept a Roja, they would not have pelted stones on our jawans. They would not have thrown grenades at us. They would not have fired at us. This is their opportunity to recuperate and rise again. But we shall not give them this opportunity. When Modiji came to power, he was elected not because Congress was corrupt. He came to power because bodies of our martyrs with head severed were sent to us from the other side. Modiji then said he would bring 10 heads of enemies against one. And he is supporting ceasefire?”

“Do you know in just one month, the terrorists will recuperate and become so strong that it will take us another one year to break their strength? Why signing for peace in the name of ceasefire? You have power in 22 states. Leave power in one state but don’t let our jawans sacrifice their lives. The sacrifice of even one life will demotivate our spirits.  Look at my condition. Friday is a dry day here. My jawan friends advise me not to go out. We are in Azad Bharat but come in Kashmir; the concept of Azad is different here. We feel like staying in an enemy country. It is my appeal on behalf of our jawans that the CEASEFIRE HAS TO STOP.”

It was on 2nd of August, 1972 that the Simla Agreement was signed by Indira Gandhi. Just 8 months back then the 13 day long war between India and Pakistan had ended. As a result of the agreement India returned 93000 Pakistani prisoners of war! Why didn’t the then Prime Minister Indira Gandhi ask for Pakistan occupied Kashmir to be returned against their freedom? The Kashmir problem would have been permanently solved. What was the reason she so readily agreed to free the Pak prisoners of war?

Regarding the ceasefire decision of the government, Maj Gen GD Bakshi wrote on his Facebook timeline, “Has our Home ministry been outsourced to Mehbooba Mufti? She wanted 9730 stone pelters released- our Home ministry promptly okayed it. Just 2 days later they were attacking an army convoy to lynch a JCO and wounded 7 soldiers and later killed a tourist and smashed the head of a school kid. They have been BRAZENLY intervening in army ops to kill terrorists.”

“The other day The Army chief rightly cautioned against a ceasefire in Kashmir. The 200 odd terrorists are under serious pressure. Every time that happens the OGWs and separatists start a campaign to stop Army ops, break the momentum of SF and give the terrorists a breather to rest and recoup. The army is being asked to stop Ops. Have the terrorists ever said they will? Have they announced a cease fire? What if they kill two busloads of Amarnath pilgrims? Who will be responsible? Why are we in such a DIRE APPEASEMENT mode?”