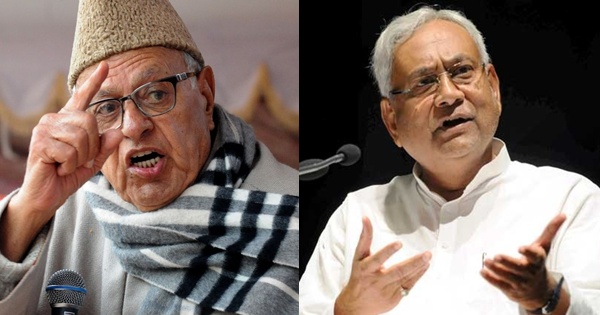 Since the last couple of days news headlines are hit with statements by former Jammu and Kashmir Chief Minister and National Conference leader Farook Abdullah and Rishi Kapoor on PoK and Kashmir issue.

A couple of days ago Abdullah talked about an independent Kashmir as ‘wrong’ as three nuclear powers, viz. China, Pakistan and India surrounded the landlocked valley. He claimed that PoK belonged to Pakistan. He further added “this will not change”, irrespective of how many wars India and Pakistan fought against each other.

A local lawyer in a Bihar court even petitioned, placing a case of treason against Farook Abdullah citing his comments were anti-national and divisive. An FIR had been registered against Abdullah.

Rishi Kapoor tweeted, standing by Farook Abdullah’s statement: “Farooq Abdhulla ji, Salaam! Totally agree with you,sir. J&K is ours, and PoK is theirs. This is the only way we can solve our problem. Accept it, I am 65 years old and I want to see Pakistan before I die. I want my children to see their roots. Bas karva Dijiye. Jai Mata Di !”

The Kapoor kinfolk had ancestral roots in Peshawar, Pakistan. Dewan Basheswarnath Kapoor, father of Prithviraj Kapoor had a house constructed between 1918 and 1922 in Peshawar. After the partition, the family shifted to India.

And now Farook Abdullah while addressing party workers in Uri, reiterated his stand on PoK, saying India should give up fighting for it. He said, “For how long will innocent blood continue to be spilled as we say that it is our land? It’s been 70 years. That is Pakistan, this is India. India hasn’t been able to acquire the land in 70 years. Today they say ‘it is our land’,” He further added, “So take it, we are also saying please take it. We will also see. They (Pakistan) are not weak and are not wearing bangles. They too have atom bomb. Before we think about war, we should think how we will live as humans.”

Chief Minister Nitish Kumar slammed Farook Abdullah’s comment on PoK, saying that entire Kashmir, including the areas occupied by Pakistan, is an integral part of India.