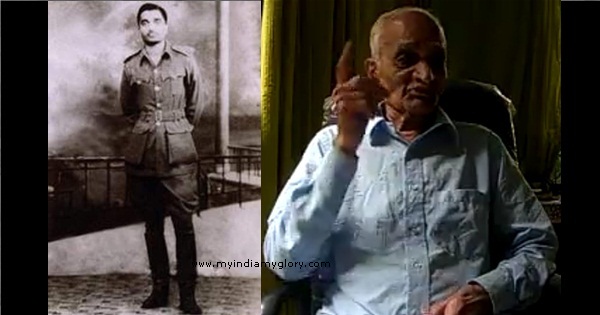 Purushottam Nagesh Oak, more popular as PN Oak! His name is synonymous with his research on the Taj Mahal. It was he who explicitly claimed the Taj Mahal to be a Hindu monument and gave a number of clinching evidences to prove his point. PN Oak was a freedom fighter; he was a Lieutenant in Netaji Bose’s INA (Azad Hind Fauz). But his historical research works overshadowed his identity of a freedom fighter.

To quote Lt. PN Oak from an interview retrieved from a VCR tape, “I was with Netaji. I was the Lieutenant in the INA. I was ADC and Private Secretary to Maj Gen JK Bhonsle, who was the 2nd in Command after Netaji. I was in Singapore, Malaya, Burma with Gen Bhonsle.”

“Japan surrendered after it was bombed during the World War II. And Japan withdrew its support of INA. Subhash Chandra Bose had the support of Japan and following the withdrawal of support, INA stopped its operations.”

“We thought the British would come, imprison us, and hang us to death for having fought against them. In such a scenario, I walked from Singapore to Assam. I had no other option. I thought instead of waiting for the British to come and capture us, take us to Delhi and try us for treason, I would rather walk to my motherland. Why wait? They will do what they want and we shall do what we want! It took me near to two months to cover the distance from Singapore to Malaya, from Malaya to Thailand, from Thailand to Burma and from Burma to India.”

“We were three, who walked from the ‘prisoners of war’ camp to India. We took this step because Singapore was connected to India by land route. So, why not walk!”

“It was 1945. I was born on 2nd March 1917. I was around 28 years old then. I told my fellow prisoners of war why not walk. I also suggested that I needed one companion. One friend agreed and then another. And so, we three set out at last and reached Assam.”

“We continued our walk and reached Dimapur. We saw a train. And we were delighted that we reached our destination. And my village was in Indore. We decided to take the train to reach home.”

To sum up how PN Oak was associated with the INA and why INA had to give up fighting following surrender of Japan, here is an account. World War II had started in 1939, but Japan had already been at war with China in 1937. By 1941, Germany, after conquering most of Europe formed the Axis alliance supported by Japan and Italy. They collaboratively fought against the enemies, who formed the Allies alliance comprising of France, Poland, and United Kingdom. Later, more powers including US and China joined the Allies.

During this time, in 1940, at the age of 43, Netaji Bose escaped from India. The British employed lakhs of Indians in this war against the Axis powers.Ironically, Mohandas Karamchand Gandhi, advocate of non-violence, facilitated lakhs of Indians towards violence in war, leading to lakhs of death in battlefield. Thousands of Indian prisoners of war were detained in Japan, as initially this island country won. PN Oak was a prisoner of war. Later under the leadership of Rash Behari Bose, Mohan Singh, and few more leaders, the INA was formed with around 60,000 soldiers, all prisoners of war. Subhash Chandra Bose took the leadership, reorganizing the force. PN Oak joined the INA. Netaji Bose also sought the support of Indians settled abroad. Many Indians there not only joined Azad Hind Fauz but also donated money, gold, food grains, etc. for the cause – for the freedom of India.

Netaji Bose established the Provisional Government of Free India, i.e. Azad Hind Govt. in Singapore on 21 October 1943. Its army was the Azad Hind Fauj. He allied with the Axis powers and his cause was funded by Imperial Japan monetarily, militarily and politically. It was recognized by 11 countries including Russia. After this alliance with Japan, the Azad Hind Fauz won several battles to victory in the Northeast. They hoisted the National Flag in the Andamans and Manipur. After Japan surrendered on 15th August 1945, Azad Hind Fauz’s support of Japan ended. By then 26,000 Azad Hind Fauz soldiers died in action for the freedom of India. Japan saw no other option than to surrender, as nuclear bombing of Nagashaki and Hiroshima by US on 6th and 9th August had already paralyzed the island country and not surrendering would have led to further bombings which could have had a devastating effect.

Speaking on History and pointing out facts was inherent in Lt PN Oak even when he was in the INA according to an account by Col Dhillon, who was tried in Red Fort by British (famous as INA Trials), that led to Royal Navy Mutinee and revolt by Indian soldiers, which ultimately forced the British to leave India. While a section of people applaud the research works of PN Oak, another section, the majority, criticize him and do not approve his works. He is more criticized than extolled. He questioned accepted views on History and re-interpreted many historical records, all of which were published as a series of books. Lt PN Oak has been the most read and the most discussed for his research on the Taj Mahal. He has proven in his book Taj Mahal – The True Story that the Taj Mahal is actually Tejo Mahalaya, a Shiva temple-palace. His work was published in 1965; it was banned by the then Congress government. In this book, Lt PN Oak provides a number of archaeological and literary evidences besides foreign visitors’ account on the monument to prove his point.

Islamic invaders including Mughals looted and destroyed hundreds of thousands of temples. They converted many of these temples to mosques or other Islamic structures. Hence going by this and the numerous evidences Lt PN Oak provided, his claims may be justified. Amongst researchers, who claim a similar conclusion that Taj Mahal is a Hindu monument, is Professor Marvin H. Mills, a leading New York architect and professor of architecture at the Pratt Institute He had studied the Taj Mahal in detail. Here is part of his letter published in The New York Times: “New information and analysis have come forth to constitute a compelling argument that the Taj was actually a former Hindu palace occupied and converted to a tomb by the Moguls…There are many other inconsistencies in the Taj legend. The building to its left is now a mosque. Had it been built originally as a mosque it would almost certainly have been oriented directly to Mecca, instead of due west. The four ‘minarets’ that surround the Taj mausoleum are inappropriate, for they logically should have been in front of the ‘mosque’ for convenient calls to prayer.”

Abdul Hamid’s book Badshahnama, which contains the history of the first twenty years of Shah Jahan’s reign, states that Taj Mahal is a temple-palace taken from Jaipur’s Maharaja Jaisingh. According to this book, the building was known as Raja Mansingh’s palace.

It is upon the readers to draw a conclusion based on the many researches by Lt PN Oak and different scholars!

Featured image and video (retrieved from a VCR tape) courtesy: Shubham Sharma (great grandson of Maj KP Sharma, who led a mass revolt against British in Jabalpur following INA trials in Red Fort; Subham’s forefathers were in Azad Hind Fauz). His Tatuji was Col Dhillon who was tried in Red Fort, famous as INA Trials. The interviewer in this video is unknown. Please mail to myindiamyglory.com if the interviewer is known; his name will be incorporated.