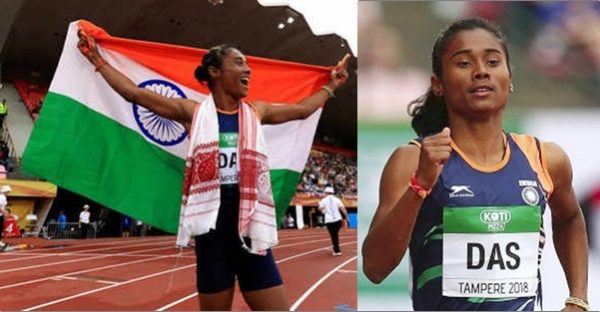 Hima Das, the sensation who scripted history by winning gold in 400m category in Finland. Daughter of a farmer from a remote village in Assam has done the entire country proud. Eighteen-year-old Hima Das, daughter of a farmer from Kandhulimari village near Dhing in central Assam’s Nagaon district created history when she clinched gold in the 400m final at the IAAF World Under-20 Athletics Championships in Tampere in Finland, after she clocked 51.46 seconds to claim top position.

She became the first Indian sprinter to win gold at a global track event. She was born to Jonali and Ronjit Das, paddy farmer in Kandhulimari village, about five kilometers from Dhing town in central Assam. Her parents, who had four other children to feed, did not have enough money to spend on her sports training. Hima Das, however, was not to be deterred.

There is an interesting story behind Hima’s journey to the racing tracks. There are no basic facilities at all in the village she was born and living, what to speak of technicalities of track event. It was unbelievable that a girl from such an area could make it global but she did. She saw a dream and made it a reality.

As a young girl, Hima Das would run off to play football with the boys in her village. At one point, a local coach noticed her speed and advised her to focus on athletics. During an inter-district athletics meet, Hima Das won gold in 100m and 200m events. Thanks to her blistering speed on the tracks, she was noticed by Nipon Das, an athletics coach with the Directorate of Sports and Youth Welfare. Thereafter, Hima Das improved her speed at every meet she participated in.

Her love for the speed defied all odds. A star was in the making. Hima’s coaches were impressed with her dedication but more importantly, they were awestruck by her raw speed. Unlike most other sprinters and runners across the world, the Hima Das had little formal training. At the Junior National Championships, she competed with girls who had trained under specialised coaches to qualify for the finals of the 100m.

One of her early coaches said he had given Hima only some basic training and she picked up the rest as she went along. Raw speed was her ally as she challenged stronger girls in her age group. Nothing could hold her back even when many around her had little expectations. Not long after, she boarded a flight to Gold Coast for the Commonwealth Games. She went to Australia as one of India’s brightest medal prospects. The spirited teenager did not win a medal but she did India proud with her brilliant performance.

It was an emotional moment for Hima’s mother Jonali, who recalled the hard yards her daughter put in over the years. “We are happy with her performance. She won the gold after years of hard work,” she said. According to other members in the family, Hima never ran for medals – she ran, they said, to beat herself, to better own timing. Hima was determined to make the cut. She strived hard, trained hard and made full use of her raw speed.

There are other athletes too in her village and nearby areas waiting for the opportunity, now that she had shown them the way what hard work, dedication, devotion and zeal can do. She also proved a young girl from a remote area can also create history. This accomplishment will certainly inspire young athletes in the coming years. It was a meteoric rise from humble beginning. A nation rejoiced. A country which reserves its adulation for cricket stars showered its love on the teenager from Assam. Tributes poured in from all quarters with Virender Sehwag, Amitabh Bachchan, President Ram Nath Kovind among the top names in India celebrating Hima’s triumph in Finland.

In Finland, soon after clinching gold, Hima wrapped the tri-colour and thanked India for the support and good wishes. Her interview was delightful for its innocence and her sheer, unadulterated joy. Hima was a proud young girl, happy to put Indian athletics on the world map.

Simple story line of Hima Das – a young girl with dreams, no facility worth the name, lack of finance, lack of adequate training, whatever training she could avail took it religiously, worked hard, she knew she is gifted with the speed, gifted with power of speed, energy and determination, not shy to work hard and harder, she knew her goals, her ambitions. And she did it. Did the unbelievable considering her limitations.

Shital Mahajan, the Sky Queen Who Did 5 World Records and 14 National Records