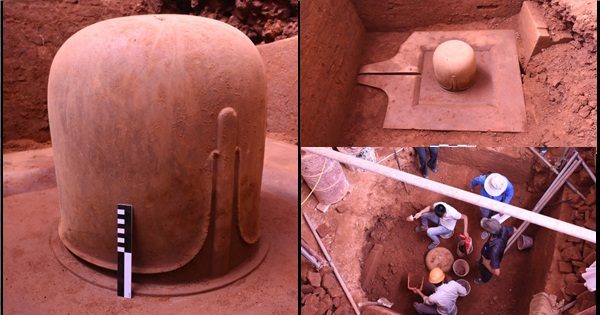 This easternmost country Vietnam located on the Southeast Asian Indochinese Peninsula is home to a number of Hindu temples. Cambodia to its west has few of the world’s most magnificent temples. The standing cultural symbols of the past in these countries prove a civilizational connect with India in ancient times. The recent excavation of a Sandstone Shivalinga in Vietnam further corroborates the fact.

External Affairs Minister of India Dr. S. Jaishankar tweeted about a civilizational connect of India with Vietnam. He posted a news about the discovery of a huge sandstone Shivalinga during excavations by the Archaeological Survey of India in the Cham temple complex as part of an ongoing conservation project. 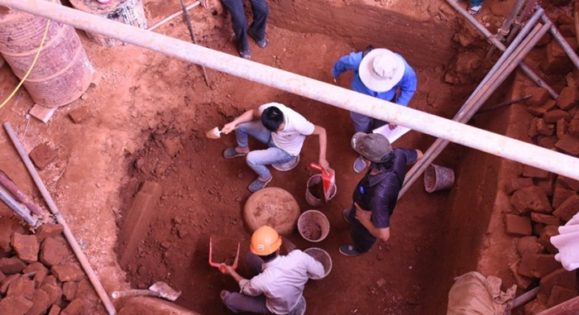 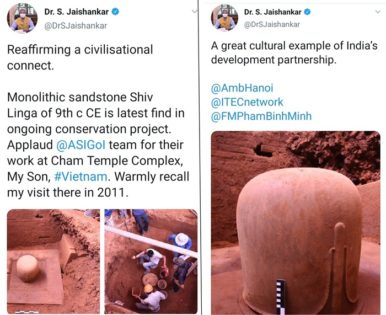 Twitteretti responded with many appreciating ASI’s work and posting images of temples they visited in My Son. In response to the findings of the sandstone Shivalinga in Vietnam, Patrick Brauckmann (Chairman/Interim CEO, Pasha Brands Ltd) tweeted thus: “Ancient India stretched from the Arabian Sea past the tallest mountains in the world well into Central Asia. There must be thousands of these lost & hidden pieces of her history scattered all over. This serves as a recognition of the power of the Dharma.”

My Son, located in Quang Nam province in central Vietnam, has a number of groups of temples – abandoned and in ruins, spread across more than two kilometers in a valley surrounded by mountain ranges. Most of these temples are dedicated to Shiva, also known as Bhadreshvara and other local names.  These temples, dating back from the 4th to 14th centuries were built by the rulers of Champa, who were known as the Chams. Originally there were around 70 temples in My Son and many inscriptions in Sanskrit were found from the site. 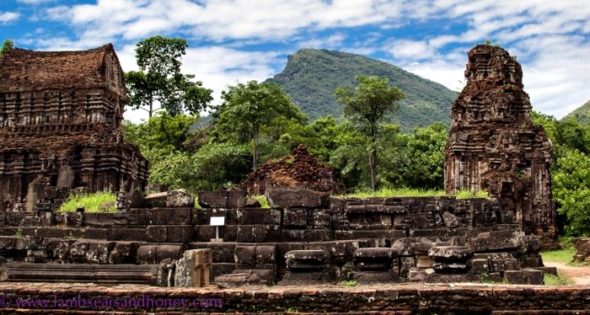 The carvings and architectural style of the temples in My Son bear similarity to Hindu temples in Bagan of Myanmar, Angkor Wat of Cambodia, Ayutthaya of Thailand, and Borobudur of Java in Indonesia. The site of My Son has been recognized as a UNESCO World Heritage site. The Archaeological Survey of India is presently working in the My Son site as part of an ongoing conservation project, as mentioned in the tweet by External Affairs Minister of India Dr. S. Jaishankar.

Georges Maspero in his book The Champa Kingdom has written in detail about the Cham rulers based on archaeological excavations, inscriptions found at the site, carvings of the temples, and various literary evidences. Researchers who have studied the temples in My Son in detail are yet to come to a conclusion about how the complex and grand structures were constructed and the carvings given shape in red brick. My Son Relics by Ngo Van Doanh has a detailed description about the relics in this site. The discovery of the sandstone Shivalinga will further add a new dimension to research on temples at this site. 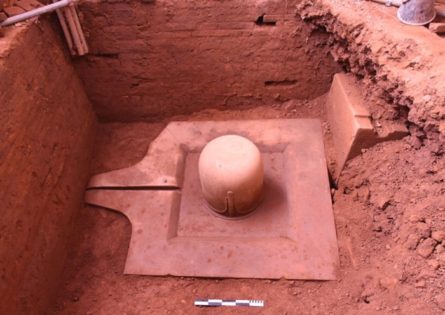 Besides the My Som extended area, Chams also ruled Simhapura, now known as Tra Kieu and Indrapura, now known as Don Duong.  The Chams were an ethnic group of people of Austronesian origin, who migrated via sea from Taiwan during pre-historic times. Chams live in various parts of Southeast Asian region including Cambodia, Thailand.

The temples built by the Chams in My Son including Sanskrit inscriptions are clear evidence that they were Hindus and the region had a Sanatana cultural identity. More excavations will lead to discovery of more historical facts.