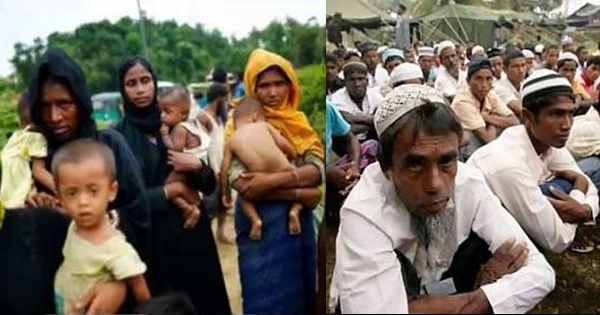 Recently, the Home Ministry confirmed about the deployment of Border Security Force and Assam Rifles in the Myanmar-India border to prevent further infiltration of illegal Rohingyas to the country. India suffers from the illegal immigrant infiltration crisis with lakhs of Bangladeshis and Rohingyas settled across the country. In Assam alone, the updation of NRC resulted in the identification of 40 lakh illegal immigrants.

Border issues in Jammu and Kashmir has been a burning problem. And now in a first of its type, Rohingya terrorists attacked Indian Army jawans at the Indo-Myanmar border in Mizoram. According to a DNA India report, ‘Arakan Rohingya Salvation Army (ARSA), an insurgent group of Rohingya Muslims attacked a patrol team of Assam Rifles on the Indo-Myanmar border recently. According to sources in Assam Rifles, the ARSA terrorists are looking to build terror camps on the Myanmar side of the India border.’

The Rohingyas attacked the Assam Rifles jawans in Mizoram in Lawngtlai district. They fired and when the Assam Rifles retaliated, the terrorists fled to the Myanmar border. The thick jungle cover was their advantage. According to the DNA India report, ‘this attack is reportedly part of a bigger design to launch a massive onslaught on the Indian armed forces. The aim is to build terror infrastructure in the border area.’

The report also mentions about Pakistan’s intelligence agency providing huge monetary support including logistic and military training to the Rohingya terrorist group. It is time the government implements strict steps to deport the thousands and lakhs of Rohingyas settled across the country.

A few months ago, the Union Home Ministry’s order to deport Rohingya Muslims to Myanmar has led to filing of petitions in the Supreme Court against the move. Union Minister Kiren Rijiju has said that Rohingya Muslims are illegal immigrants in India and also said that nobody should preach India on the issue, irrespective of whether they are registered under the United Nations Human Rights Commission. Home Minister Rajnath Singh, lashing at Rohingya supporters, has also said Rohingyas are not refugees but illegal migrants.

After violence in the Western Rakhine State of Myanmar, most of the Rohingyas fled to India, seeking refuge. They have settled across the country including Jammu, Hyderabad, Haryana, Uttar Pradesh, Delhi-NCR and Rajasthan. The union home ministry has said illegal migrants are  easy targets for recruitments by terrorist organisations. No wonder terrorism has seen a rise in the last few decades!

Following appeal by petitioners, the Supreme Court  has recently said the state should strike a balance between human rights and national interests while dealing with the issue. The apex court also granted liberty to the petitioners to approach it for redressal in case any contingency arose during the intervening period.

Maj Gen (Dr) GD Bakshi, recently gave his opinion on the Rohingya issue. To quote General Bakshi, “These Rohingyas were sent as part of V force sent in World War II to wage guerrilla warfare behind Japanese lines. They skirted clear of the Imperial Japanese army but launched attacks on Buddhist Pagodas, monasteries and villages. That is the root of the current tensions between the two communities.” 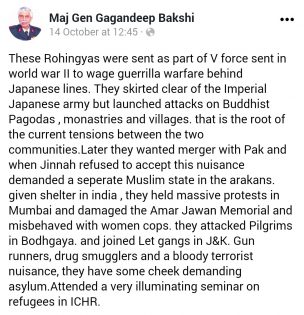 “Later they wanted merger with Pak and when Jinnah refused to accept this nuisance, they demanded a separate Muslim state in the Arakans. Given shelter in India, they held massive protests in Mumbai and damaged the Amar Jawan Memorial and misbehaved with women cops.”

“They attacked pilgrims in Bodhgaya and joined Let gangs in J&K. Gun runners, drug smugglers and a bloody terrorist nuisance, they have some cheek demanding asylum.”