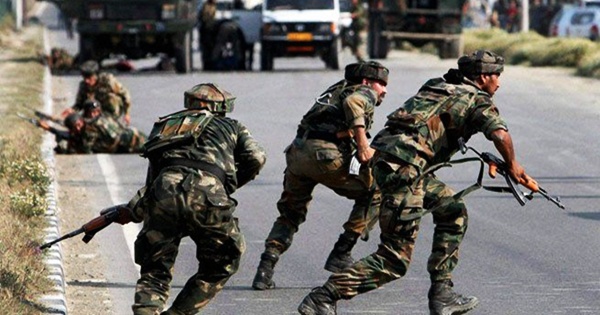 “The Centre asks Security Forces not to launch operations in Jammu & Kashmir during the holy month of Ramzan. Decision taken to help the peace loving Muslims observe Ramzan in a peaceful environment” tweeted the Home Ministry of India.

Do our soldiers deserve this? Attack by terrorists, stone pelting, border ceasefire violations are but humdrum incidents in the Kashmir valley. How can the govt. adopt ceasefire? To let the ‘peaceful’ terrorists effortlessly plan, strategize, and attack our soldiers? Almost every day our soldiers are martyred during counter-terrorist operations and terrorist attacks. Stone pelting has injured hundreds and thousands of our soldiers. 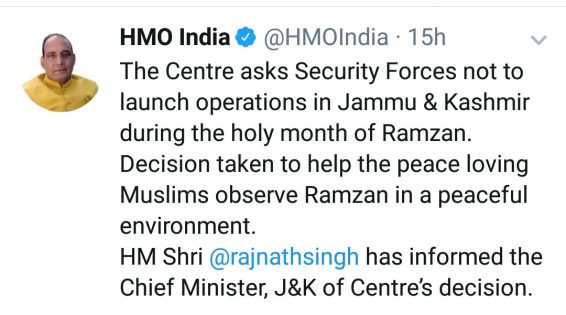 Going by the above reports, will the terrorists remain silent during the ceasefire period? Yes, the govt. is only indirectly empowering them to strengthen themselves so that they start their terrorist activities afresh. If terrorism has no religion, why adopt ceasefire on any religious occasion?  Should the nation be put at stake? Should the soldiers’ lives be put at stake?

The HMO further tweeted, “It is important to isolate the forces that bring a bad name to Islam by resorting to mindless violence and terror.”

Our soldiers are our protectors at the border. We, the protected, lead a carefree life according to our whims and caprices. While they sacrifice their lives for us, we act as silent spectators. While they put their lives at stake defending us against terrorists, we enjoy our freedom amid friends and families. Should the soldiers’ lives be put at stake with the decision of ceasefire?

What about stone pelters in the valley? Around 9730 stone pelters were released in Jammu and Kashmir. The result? Two days later they attacked an army convoy to lynch a JCO and wounded 7 soldiers. They later killed a tourist and smashed the head of a school kid. Will the stone pelters stop their activities? But ceasefire should be applied on the security forces! What an irony!!

Maj Gen GD Bakshi wrote on his Facebook timeline, “Has our Home ministry been outsourced to Mehbooba Mufti? She wanted 9730 stone pelters released- our Home ministry promptly okayed it. Just 2 days later they were attacking an army convoy to lynch a JCO and wounded 7 soldiers and later killed a tourist and smashed the head of a school kid. They have been BRAZENLY intervening in army ops to kill terrorists.” 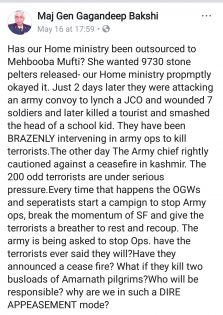 “The other day The Army chief rightly cautioned against a ceasefire in Kashmir. The 200 odd terrorists are under serious pressure. Every time that happens the OGWs and separatists start a campaign to stop Army ops, break the momentum of SF and give the terrorists a breather to rest and recoup. The army is being asked to stop Ops. Have the terrorists ever said they will? Have they announced a cease fire? What if they kill two busloads of Amarnath pilgrims? Who will be responsible? Why are we in such a DIRE APPEASEMENT mode?”

Maj Gen GD Bakshi further said in a chat with Manoshi Sinha, “It is an insane decision dictated by the separatists. Whenever the terrorists are under severe military pressure they ask the OGWs to get them a cease fire to recoup, rest and reorganise. Has the LET declared a ceasefire? Will stone pelting continue during Ramzan and killing of Amarnath pilgrims? The bloody terrorists are on the run. Why are they being given a reprieve?”

“A cease fire is usually between two armies who have fought one another to a standstill. The 200 odd terrorists in Kashmir are scurrying for their lives and this is a a transparent ploy to give them a chance to rest and recoup and survive. What did the earlier Non- initiation of combat Ops in the Vajpayee era achieve? The level of violence just went up. Don’t we have any institutional memory? Can’t we see through this ploy? Some people really seem desperate to get a noble peace prize at the cost of the security of our country.”

According to a Hindustan Times news report, on May 9, Mufti had said the Centre should consider a unilateral ceasefire in the state starting from Ramzan in mid May till the completion of the Amarnath Yatra in August. The nation shook last year when terrorists opened fire on Amarnath yatris returning on a bus. 7 yatris were killed and several wounded. Terrorists also fired at a security vehicle in Anantnag district of Kashmir. Who will be responsible for any future attack on pilgrims by terrorists? Why the ceasefire when there have been proofs of terrorist operations in the valley almost every day!