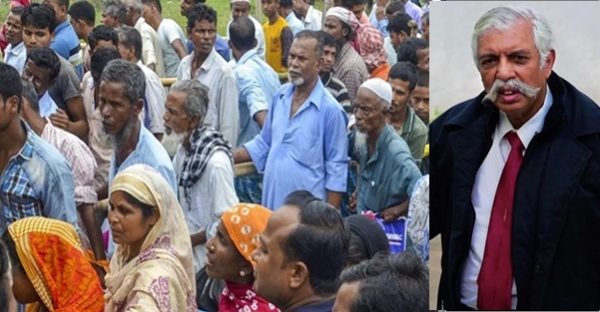 With news hitting the headlines of over 40 lakh people not finding a place in the updated National Register of Citizens (NRC), there has been an uproar across the country, many favoring the NRC drive and many against it. It was a Supreme Court monitored exercise to identify illegal immigrants living in Assam. The majority of the illegal immigrants are believed to be Bangladeshis. People who entered Assam after March 24, 1971 were viewed as illegal immigrants.

In context of the uproar, Maj Gen GD Bakshi said, “Illegal immigration is a serious national security problem. It cannot be treated in a flippant manner or through the very narrow and short sighted lens of political gain alone. That would be dangerous. Besides the Assam Govt and central govt are acting on the orders of the Supreme Court. Let us not bring down the power and authority of these national institutions.” 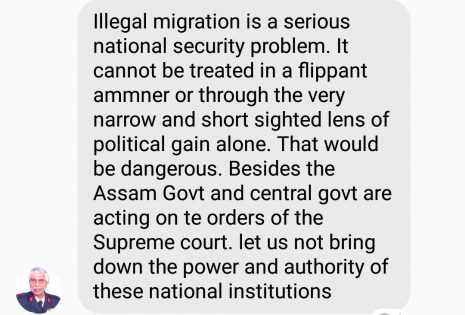 The updation of NRC has been in deference to the Assam Accord of 1985. Rajiv Gandhi was then the PM of India. The Rajiv Gandhi government had signed the Assam Accord of 1985 with the All Assam Students’ Union following the end of a six-year agitation. This agitation called the Assam Movement or Assam Agitation started in 1979; it urged the govt to identify and expel illegal Bangladeshi immigrants and safeguard the interests of the indigenous people of Assam. The movement was led by All Assam Gana Sangram Parishad and All Assam Students Union (AASU). There were protests and demonstrations that continued till 1985 until the Assam Accord was signed.

Regarding this, the ANI tweeted Home Minister Rajnath Singh speaking in Rajya Sabha, “Procedure of NRC started in 1985 through the Assam accord when the late Rajiv Gandhi ji was the PM. The decision to update was taken by Dr. Manmohan Singh ji in 2005.” 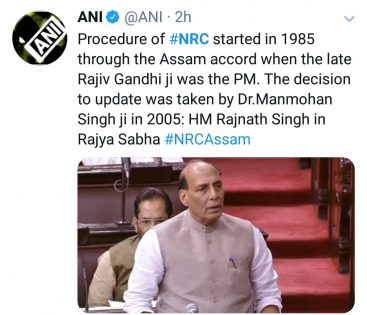 According to a New Indian Express report, the Register General of India (RGI) Shailesh, the deficit was of 40,07,707 people. The RGI said that those people whose names have not figured in NRC would get an opportunity of 30 days to file claims and objections. He also said that names of no genuine Indians would be left out.

Meanwhile, 52 Bangladeshi illegal immigrants have been deported through South Salmara-Mancachar district as per the New Indian Express report. The report said they had entered illegally and were arrested from different parts of the state.

Mamata Banerjee declared that she would provide shelter to the 40 lakh illegal Bangladesh immigrants from Assam. Dwipen Pathak, the TMC chief of Assam resigned from the party as a result of this. According an ANI tweet, Dwipen Pathak after resigning from Assam TMC Chief’s post said, “What Mamata Banerjee said about NRC, that it has been brought in Assam to drive out Bengalis, I don’t agree with that. It might create disturbance here & the blame would be on me as a pres, so I’ve resigned.” 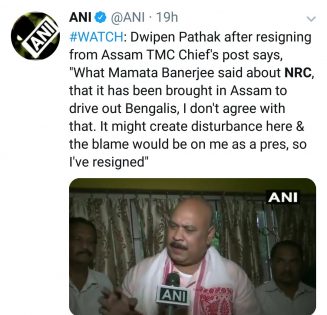 When West Bengal BJP leaders demanded NRC in Bengal, Mamata Banerjee said, as tweeted by NDTV, “Who are they? What significance do they have in Bengal? Nobody knows them. They’re just some hooligans. Their existence itself is in question and they will implement NRC here? I will see how they intervene.” 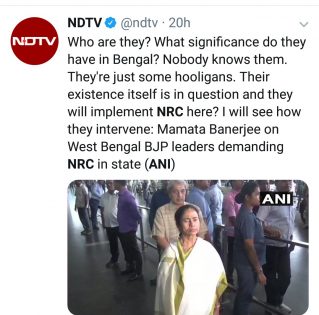 Meanwhile, other states are also demanding the implementation of NRC in respective states. MP Manoj Tiwari requested Union Home Minister Rajnath Singh that a survey like NRC should be conducted in Delhi too. He cited reasons that Delhi has a large number of Rohingyas and that foreign intruders are residing in Delhi and many of them have also attained Aadhaar and ration cards. Raj Purohit, MLA from Mumbai has requested for the implementation of NRC in Mumbai to identify Bangladeshis settled there.

First Post mentions about how a WikiLeaks cable revealed the Congress supporting the Illegal Migrants (Determination by Tribunals) (IMDT) Act ruled by the Supreme Court then. This led to souring of relationship between the Congress party and its traditional vote bank. According to the cable revelation, Congress supporting the Act made ‘identification, detection and deportation of foreigners in Assam an incredibly complex task, and also protected post-1971 illegal Bangladeshi migrants’. The First Post report reads thus: ‘A WikiLeaks cable, dated 16 February 2006, authored by a US consulate officer in Kolkata had alleged that then Congress president Sonia Gandhi, campaigning for the May 2006 state Assembly election in Assam, “in a brazen appeal to the Muslims, offered to amend the Foreigners Act to prevent deportation of illegal Bangladeshi immigrants”.’ According to the same WikiLeaks cable as reported by First Post, the Left Front in Bengal in 2005 gave Bangladeshi ‘immigrants instant citizenship and voting rights to maintain and gain support within the Muslim community.’

Hon’ble Supreme Court Should not Interfere on National Anthem Issue. Here’s Why