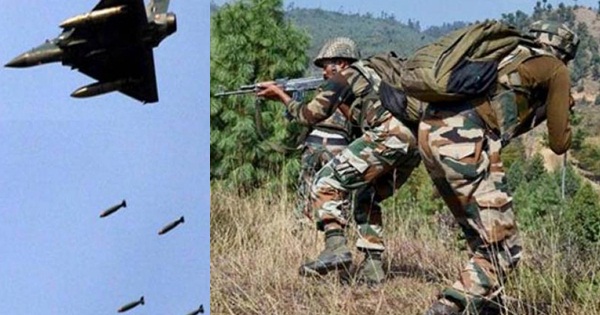 Terrorists attacked again. This time at Jammu in the heart of the city on 7th March around noon. It was a grenade attack in the crowded SRTC bus stand area. A teenager was killed and 32 people were injured including four being critically wounded. The grenade exploded under a bus, hencelives were saved. Had it exploded outside, the loss of life and property would have been huge. A suspect named Yasir Bhatt arrested for lobbing the grenade has alleged links with Hizbul Mujahideen terrorist outfit. Bhatt, who hails from Kulgam of Kashmir, has confessed to the crime. There was a CCTV footage that corroborates his involvement in the attack.

In this context, Maj Gen GD Bakshi wrote on his Facebook timeline, “What will it take to get this country of Mahatma Gandhi to fight? For God’s sake How do we get this country of Cowards to fight to protect their own ordinary people- an attack on those in the Zulu category? I don’t see what we are waiting for.One strike is TOKENISM- it is bloody well not enough. cant we see that?They have attacked again in Jammu and wounded 18 people. by evening i suppose we will slowly be told how many have died slowly so that our Gandhians sleep should not be disturbed. we have to Pak a clear message that this is NOT ACCEPTABLE please hamare aam log Yateen nahin Hain.” 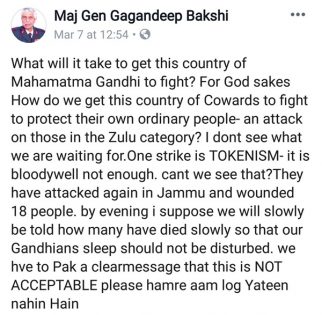 Maj Gen Bakshi further wrote, “My sincere advice to the powers that kindly don’t de-escalate. Dont take the pressure off till Pak takes some concrete steps. Talks and terror don’t go together- right? Why are we talking on Kartarpur when people are being blasted in Jammu? Can’t we postpone these? I’m afraid there will be many more terror strikes in the days ahead and the people in charge could be seriously EMBARRASED. They have far Higher stakes than we ordinary citizens so they need to think it through. Let us learn our Lessons. Did one Surgical Strike stop terror attacks? NO. Will just one Air strike stop further terror attacks – absolutely NOT.”

“So think of end state analysis and conflict termination in real Terms. Let us not diminish our Image in the international community as a country that Just Cannot take hard descions and see them THROUGH. One Indian has been killed in Jammu 32 are wounded. Hope the ones who are serious won’t die. The timing should not make a mockery of all that we very Bravely Tried to DO. Please show national STAMINA to stay the course.” 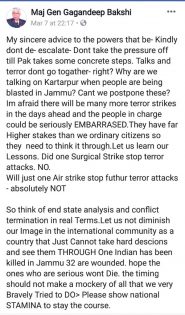 On the evening of 8th March, terrorists kidnapped an Indian Army soldier from his home in Qazipora Chadoora in Budgam district of Jammu and Kashmir. They stortmed his home and took him away. The jawan Mohammad Yaseen Bhat, a rifleman, was on a month-long leave. Few months back, in June 2018, terrorists kidnapped Aurangzeb, a rifleman with 44 Rashtriya Rifles, and shot him dead in Pulwama.

Only last month, Pakistan-based Jaish-e-Mohammed made a suicide attack on a CRPF convoy where 40 CRPF jawans were martyred.  In retaliation, on 26th February, the 13th day of the attack, 12 Indian Air Force Mirage-2000 fighter jets entered into the Pakistan territory and dropped 1,000-kg laser-guided bombs on Jaish-e-Mohammed terror launch pads. As per the latest sources quoted by ANI, a total of six bombs were dropped on Pakistan based terrorist camps. The key target was on the biggest JeM hideout in Balakot, Pakistan. All of the jets and the IAF pilots returned safe ‘without a scratch’. The attack did not affect any civilian or any Pak military installation given the credible intelligence received. The ammunition dump blown up by the IAF Mirages in Balakot, Pakistan had stored over 200 AK rifles, uncountable hand grenades, explosives and detonators, as tweeted by the ANI. Around 350 terrorists including top JeM terrorists were killed in this bomb strike by the IAF as per various news reports. Among the commanders killed were Maulana Yusuf Azhar alias Ustad Ghauri, brother-in-law of JeM chief Maulana Masood Azhar.

The very next day of the air strike, i.e. on February 27th,  Pakistani F16 jets tried to intrude into Indian terrirtory, targetting Indian military installations in the Rajouri sector of Jammu and Kashmir. IAF Wing Commander Abhinandan Varthaman, flying an MIG-21, not only averted the Pakistani F16 jets from entering into Indian territory but also shot down one F16 jet. He ejected from his MiG-21 after it was hit by the enemy. After over 60 hour captivity in Pakistan, he was released.

Does the story end here? No! There has been continuous ceaseifire violations at the border. Civilians have been affected. Besides, terrorist encounters and attacks have’t stopped. Should India sit idle and wait and watch or strike again? To quote Maj Gen GD Bakshi’s words, “Dont take the pressure off till Pak takes some concrete steps. Talks and terror don’t go together- right? Why are we talking on Kartarpur when people are being blasted in Jammu?” To conclude in his own words, “Let us learn our Lessons. Did one Surgical Strike stop terror attacks? NO. Will just one Air strike stop further terror attacks – absolutely NOT.”