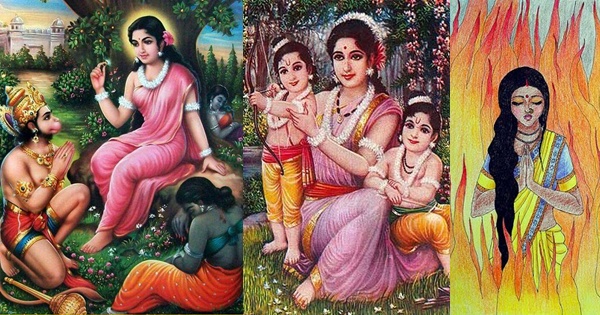 Bhumija, Maithili, Janaknandini, Bhusuta are the various names entitled to Sita – well known as Rama’s Sita. But, what about, who was she? How was she? Beautiful and elegant indeed were her external beauties but she was poignant and intelligent which made her so strong from inside that she was able to stand all odds in her life.

Sita’s birth has always been a question. Miracles do happen but as history unfolds science in Adbhuta Ramayana (Sanghadasa’s Jaina version of Ramayana) where she was portrayed as the abandoned daughter of Ravana and Mandodari, left to die in a box full of jewels somewhere far away from Lanka . Her fate of dying was changed when she was rescued by King Janak and his wife Sunaina. They became her foster parents; she was named Bhumija (daughter of Bhoomi ‘earth’). Janak (King of Mithila) discovered her in a furrow in a ploughed field.

Bhumija came to be known as Maithili (princess of Mithila) that later became the mother tongue of the people of Mithila. Her birth brought good omen for the barren lands of Mithila by bringing rain and she was thus also named Bhusuta (one who makes barren land fertile). A God incarnated gift she was for Janak, and soul of the king; hence, she was also called Janaki and Janaksuta. Her ability to question everything questionable without any fear was what made her different from rest of the society.

Sita wasn’t dependent on anybody. She was free yet bound to the bindings of the society. She was synchronized yet unsynchronized in her thoughts. She didn’t need Rama to rescue her for she was herself capable of being rescued. She determined her own fate. No one was responsible for her fate. She didn’t acknowledge the detrimental of society when questioned about her character. The free soul indeed, who knew to fight against injustice! This authenticity of hers to get through the toughest situations of her life as a real fighter was through deep meditation and concentrations which summoned her to be called, Vaidehi (the ability to acquire the state of deep meditation).

Swami Vivekanada had depicted Sita as the complete representation of Indian by nature. She never returned injury but even didn’t withstand silently. She was the independent mind who instead of living within the maryada (laws of society) had the power to fight against every injustice done against her as a single soul. He believed that there might be several Ramas but there can never be another Sita. She wasn’t the representation of feminism but was the idol of humanism. Whether it was exile, abandonment or abduction she faced every phase of her life with full contentment and courage. She was with everyone yet she stood alone in the crowd.

A revered figure in Indian History who refused to come like a thief with Hanuman from Lanka from the captivity of Ravana showing her belief and confidence over her partner. But at the same time she was the lady who didn’t support her husband who doubted her character and asked her to give Agnipariksha and refused to go back to Ayodhya where her character was questioned. Sita was Janakmaja {Janak’s+ atmaja (Sanskrit word which means part of ones soul} and Bhoomiputri (daughter of Bhumi) and Rma (better half of Rama) at the same time, yet content and complete within herself.

‘Janaki’ changed her name to Sita (Sanskrit work of furrow-Seet) when she got married to Rama but that didn’t change her identity as an independent woman. She is pictured as a quiet and submissive figure but speaks out powerfully in favor of or against some principle. She entered into a discussion with Rama during their stay at Chitrakuta where Rama was bound to vow for not slaying anyone without provocation from the opposite. She had debated Ravana and showed him his limitations when he forcefully wanted to marry her.

Sita is the name which resides before Valmiki’s Ramayana depicting the epitome of motherhood that is mentioned in the Rigveda as the Earth Goddess, one who blesses the land with fertile soil and good crops. She is the representation of Earth’s peace and prosperity. Ramayana is considered as the epic where everything is personified in Rama but Sita is the versatile lady, the reincarnation of Vedavati (an avatar of Goddess Sri Mahalakshmi) who single-mindedly caused the destruction of Ravana for her molestation by him through Rama.

‘Janaksuta’ is not the helpless woman; she is a woman who refigures the completion of a man either being together or being away. She is the only woman who was able to move Pinaka (the bow of the god Shiva). She was equal to Rama in all aliquots of life be it perseverance or sacrifice. She completed him in every aspect.

‘Maithili’ reined her motherhood with all justice. Besides being mother of Lav and Kush she loved Lakshman as her son and when questioned about Lakshman’s integrity during their period of exile just before going in search of Rama, in the Mareecha episode she readily gave Agnipariksha (trial by fire) to prove the purity of their son and mother relationship. It was not that she was afraid but it was because she didn’t want her son Lakshman to be hurt because of her. She took the pain all by herself. She was composed during this period yet she was confident about their relationship and proved the society wrong when fingers rose against their relationship.

‘Vaidehi’ – with her ability to transcend body consciousness, she lived a life with penance and minimum want yet with dignity and vibrancy. She is known for her dedication, self-sacrifice, and courage. Daughter of King Janak and Sunaina, elder sister of Urmila and cousins Mandavi and Shrutakirti, Ardhangini (better half) of Rama, queen of Ayodhya, mother of Lav and Kush yet a supreme paradigm of humanistic virtues who symbolizes the song, Jodi tor dakh sune keo na aase tobe akla cholo re (if hearing you no one comes for help, lift yourself up and fight back alone). She queried none yet when questioned had the ability to respond back with clarity, valor and courage.

Sita is the representation of every lady in the society who deals with every aspects of life with courage and dignity. She is serine from outside yet she beholds the pyre of fire within which is capable of destroying everything within a second. She is the woman one sees in everyday life, a daughter, a mother, a sister, a colleague, a friend, a wife. She is present in every woman in one way or another. She has changed her clothes and transformed into a new body dividing her in every woman one sees around. Thus, Swami Vivekananda depicts, “Indian mythology might vanish, Sanskrit language might be demolished from earth but Sita will remain forever.”