Maj Sandeep Unnikrishnan: 1st Martyr to be Depicted in an NFT Collection by Aditya Bakshi 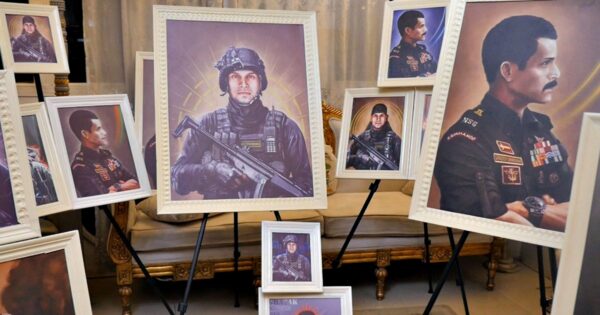 ‘Don’t come behind me, I’ll handle them’.

These immortal lines now adorn an NFT or Non Fungible Token, a unique digital art asset depicting Major Unnikrishnan. This digital art piece which shows Major Sandeep Unnikrishnan, AC of the National Security Guard, gazing back at the viewer with his characteristic, ever- youthful and gallant eyes, is designed to be ‘PFP- Castable’ or usable as a profile picture in social media and is one of many variants that constitute what is designated as the Brave heart of Mumbai NFT collection. 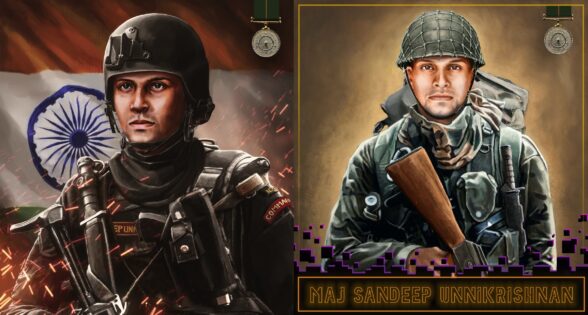 Ever since the success of NFT collection like Crypto Punks, Bored Ape Yatch Clubs, the auction of Beeple’s 5000 days at Christies, NFT’s have become the new age go to medium for artists.

It is for the first time however, that an entire series collection dedicated to a martyr from the armed forces, has been launched.

Usually seen as a space for Celebrity collectibles, Whimsical animal characters, AI generative and digital motion artworks, there has been a growing trend of NFT artworks with meaning and purpose.

We spoke to the founder and creative director of the series, Aditya Bakshi, a former Captain in the Merchant Navy, who leads studio Anameta. 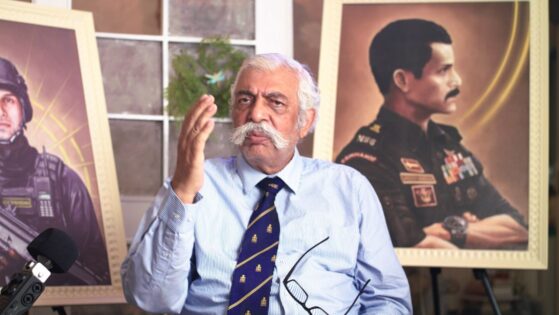 Editor MyIndiaMyGlory: Tell us about the Brave heart of Mumbai NFT collection.

Aditya Bakshi: It is a tribute to our personal hero Maj Sandeep Unnikrishnan who had martyred in the 26/11 attack in the Taj Hotel, Mumbai. He laid down his life but saved many souls. He will forever inspire us. We believe that an NFT digital art collection, which consists of artworks that people can employ as their profile pictures, in their social media networks, will help bring his face, his memories and his life story amongst the people. Moreover, it would be a source of great inspiration and pride for the youth.

Our artists, who mostly hail from Manipur, from insurgent areas, have put in their heart and soul to capture Maj Sandeep in various stages of his life, right when he was in the Ghatak Commando Training School (Instructor grade) to who he was in Kargil and when he was in the NSG, part of the 51 special Action Group.

The first collection being released is termed the Genesis collection. It will be followed later by a collection of 2611 artworks NFTs, each is distinct from the other, no one is an exact copy.

So people can get them as a unique collectible and it would be recorded on the Blockchain that you are the true owner of the NFT.

So as an owner of one, it can be source of pride and inspiration that you have your Hero’s digital Persona on your networks, all your contacts get to remember him, some young people who did not know him, will know his face, and what he did, what he stood for.

We will be giving most NFTs to deserving people on merits. And anyway, everyone is welcome and encouraged to share these on social media, even if you don’t own them.

The proceeds from whatever sales that happen will go toward Remembrance activities such as Physical Art Canvas for school comic book on Maj Sandeep, war widows’ assistance or Actor Adivi’s NDA aspirant’s fund. Also, will be used to produce media and memorabilia from time to time to bring back the memories of the martyr to the people. We will be planning these paintings in schools so that the students can see them every day and be inspired. They will also be able to read the comic book on Major Sandeep and they will be encouraged to write their own stories, artwork on Major Sandeep and send Cards to the parents on Maj Sandeep birthday saying you may have lost your son, but we are your sons and daughters too.

Editor MyIndiaMyGlory: You had written a comic book on Maj Unnikrishnan?

Aditya Bakshi: Yes, I had written a comic book on Maj Unnikrishnan together with Namrita Bakshi and Sony Thokchom, a Manipuri artist. We have brought his story to many young students via that medium. 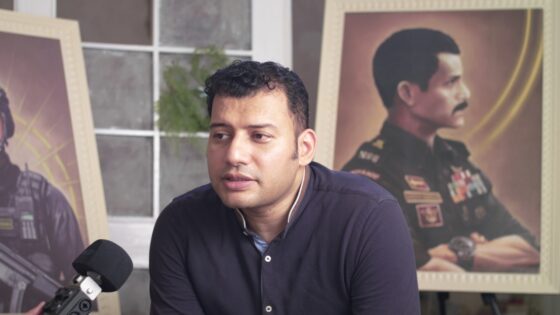 In fact that comic book, and other physical collectibles such as T- shirts, designed by a fan name Rashmi Kaimal, Tees with your NFT on them and Canvases of the NFT artworks are available from the official website of the NFTs, at www.majsandeepunnikrishnannft.com.

So, for people looking for additional physical collectibles, these are available too. We have also made multiple Physical Canvas on Maj Sandeep. These will be part of an Adopt a Hero Campaign.

We spoke to Kadijinpou Gonmei, the lead Artist and Art Director of the collection.

Editor MyIndiaMyGlory: Coming from Manipur, what attracted you to this Collection?

Kadijinpou Gonmei: It is a proud moment for us Manipuris that we are working a project of this scale, a project that will reach the people of this country.

It is also exciting that it is the new age medium of digital art NFTS.

What attracted us the most is the humanity of Maj Sandeep Unnikrishnan, that he is from the culturally unique region of India, but defended people from all backgrounds, from different parts of India and the World. 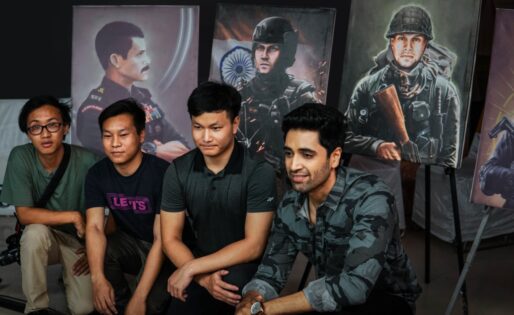 We wanted to keep this part of his personality alive. Aditya has also helped us capture the different looks and uniforms people world have seen him in through the course of his illustrious Army Career.

“We show him with mustaches in some NFTs as he had sported them and looked inspiring- these appear as a rare trait, as do the detailing of weapons and Uniforms he donned during his Armed forces career.

We do think that the fans of Maj Sandeep will like the detailing, which is lifelike, compared to somewhat whimsical attributes of typical NFT collections, like X- Ray Visions and VR sets.” Ours are Real attributes!

Also contributing to the collection is Anahita aged 11, one of the youngest artists in the world in the space “I am very happy to be part of this, it was an amazing experience to build the NFT 3D model of Maj Sandeep. He was very brave and inspiring. I came to know of him whilst doing this.” She has designed her NFT in VOXEL style art which is popular in games such as Roblox, Minecraft and Sandbox, these have a huge appeal to children. 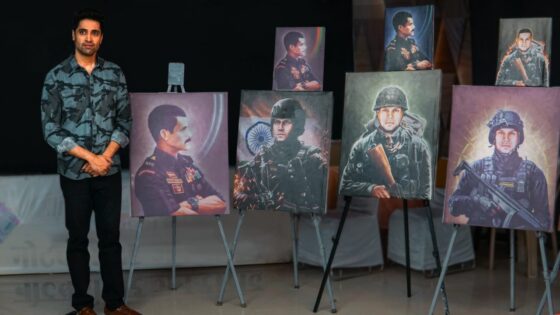 Pranav Malik, who assisted with the AI engine, Meta data and the smart contracts on the Blockchain, has further praise for the Artists. “It’s a true labor of love, we hope that the series serves as a path-breaking, or genre-breaking series which encourages other artists to work on Real Life Heroes in the NFT space.”

The first set of NFTs from the series has been launched and is termed the Genesis collection, available on Open Sea, an NFT hosting platform.

The series will be entering the World Record Book as the first NFT series on a Martyr.

The NFT’s are a steppingstone to larger outreach program, which encompasses documentaries, school’s children reach-outs and digital media retelling of the Heroes story for many years to come.

“It’s part of a new emergent phenomenon, where NFT’s are like a badge of honor that helps grow communities in which further creative or ecosystem development happens,” Aditya explains.

Anudip Sami, has offered to tie up with Aditya and Rashmi to develop a ticketing platform that could issue NFT’s to all future film, movie ticket providers, expanding the outreach of NFT’s to the film going masses. Most modern films do offer their NFT’s on platforms such as book my show and Ngaze.

“Anything that spreads the NFT’s as a welcome step.” Aditya says. 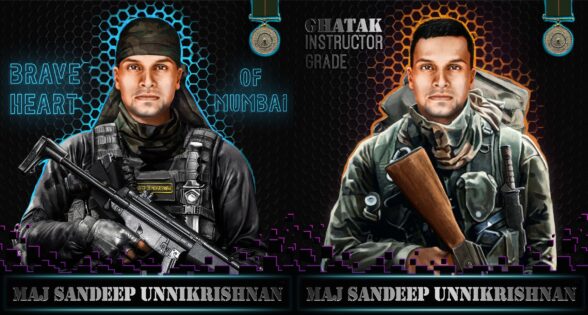 Maj Gen G.D Bakshi, a retired veteran and one of the most well-known military faces on Television and digital mediums has also lent support to the project.

“Endeavors that bring back the memory, and the sacrifice of our armed forces martyrs, must be encouraged. The heroics of our braves have been celebrated in the land since centuries using Ektaras and Ballads. We have heroes even today who are risking their lives, making the supreme sacrifice protecting the people. They must be honored in the mediums of the day. Whether films, digital shorts, NFTs- it must be done and has my full support.”

“So, we are in touch with, and are in the process of building communities on social media platforms, around Maj Unnikrishnan NFT’s. A select few who are most active will be awarded with their very own early access NFT’s.”

People are free to share them digitally without any charge. The NFT’s will be ready to collect on the platform. If purchasing, the NFTs, the payment will be in INR and the buyer would not need a Crypto currency, so that it’s truly accessible to all people, like a regular shopping cart, who are not familiar with the world of Web3 products. 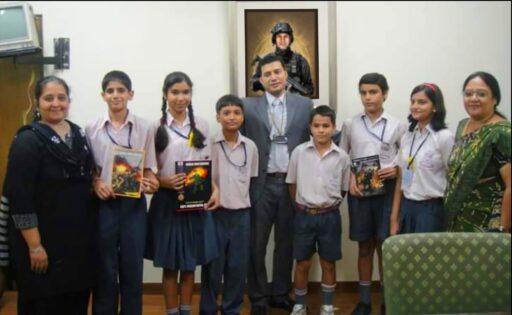 Mr. K Unnikrishnan, formerly of ISRO, father of Maj Sandeep Unnikrishnan says, “Anything to strengthen the will and resolve of the people, has our full support.”

Mrs. Dhanalakshmi Unnikrishnan, mother of Maj Sandeep Unnikrishnan says, she appreciates the effort put in by the Manipuri artists and is happy to see her son in the new digital avatar.

Adivi, present in a pre-release event was seen clapping during the NFT trailer and gave an embrace to the artists.

Lt. Gen Gurmit Singh addressing the release event said He felt very happy and proud to recall that when he was commanding his Brigade in J&K. Major Sandeep Unnikrishnan unit 7 Bihar was serving under him. In fact, Sandeep was the adjutant of his unit, and he could see in him the signs of a dedicated warrior. He was certain that he could make a name for himself one day. He was delighted that his memory was being preserved in the social media though digital art by Aditya and his Manipuri artists. It was a path breaking gesture. Major Sandeep is an iconic figure in the pantheon of our military heroes and his memory must be preserved through the ages in our social media space.

Also re-releasing in the NFT Release Event is the graphic novel on Maj Unnikrishnan titled ‘Brave heart of Mumbai” written by Aditya and illustrated by Sony Thokchom, meant for school children. 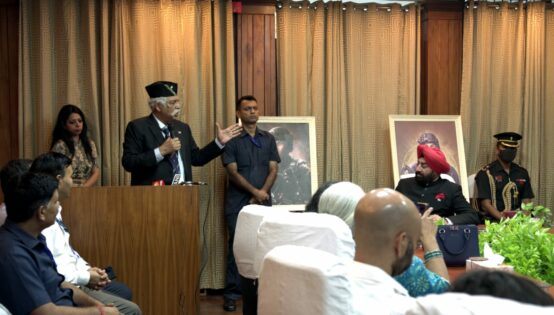 Some of the NFTs have been depicted in Physical Canvases.

This collection Canvases will be given to some schools and art galleries.

Aditya adds some of the NFT’s have quotes that he had said.

“Here’s an NFT”, he says, showing a NFT with Maj Sandeep in a Vivekananda like pose, looking heroic and inspiring. On the right are inscribe some words, ‘I will not die an ordinary death, the way I will go, the whole nation will remember me’. “He had this intuition, you know” Aditya says, “and he was right. It was no ordinary death, we still remember him, and continue to remember him, in ways of the modern world as it evolves, for generations to come.”

At that time of the writing General Bakshi had shared a picture of one NFT canvas in social media which has gone viral and garnered more than eleven thousand likes.

We Need No ‘Kari Ninda’ but Action on Ground: GD Bakshi on Arnab Goswami