Boycott Chinese Goods so that Our MSMEs and SMEs Can Create Jobs: GD Bakshi 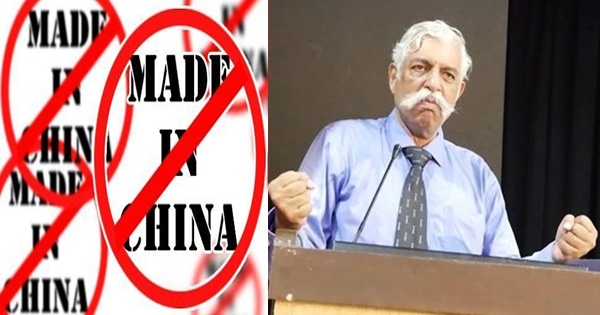 Niti Aayog (National Institution for Transforming India), a Government of India policy think-tank established by the NDA, has a different perspective to this problem. According to them it is ‘severe under-employment’ rather than unemployment that is affecting India’s development.

How can high-productivity and high-wage jobs be created? More than 67 percent have income less than Rs 10,000 a month. The ‘Make in India’ campaign needs to be successfully implemented. More youth with an entrepreneurial bent of mind should come forward and give shape to this campaign to create sustainable jobs. The government has rolled out several schemes to make this campaign a reality.

Products from China, though of low quality, but cheaper compared to Indian counterparts, are quite popular in the Indian market. Indigenous production should be encouraged. These products are negatively affecting the Indian economy to a great extent. For Indian industries to flourish, Chinese goods should be boycotted.

In this context, Maj Gen (Dr) Gagandeep Bakshi SM, VSM (retd.) says, “We need to boycott Chinese goods so that our own MSMEs and SMEs can come up and create drastically needed jobs. Otherwise we could have an explosion.” 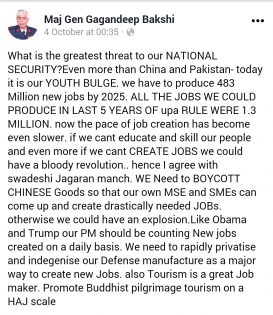 He says further, “What is the greatest threat to our national security? Even more than China and Pakistan, it is our youth bulge. We have to produce 483 million new jobs by 2025. All the jobs that we could produce during last 5 years of UPA rule was 1.3 million. Now the pace of job creation has become even slower. If we can’t educate and skill our people and even more if we can’t create jobs, we could have a bloody revolution.”

“Like Obama and Trump, our PM should be counting new jobs created on a daily basis. We need to rapidly privatize and indigenous our defense manufacture as a major way to create new jobs. Also tourism is a great Job maker. Promote Buddhist pilgrimage tourism on a HAJ scale,” he concludes.

Jupiter Infomedia: Facilitating the Growth Story of MSMEs and SMEs

Pravin Daryani – The growth of MSMEs will decide the future of India Inc.