We Need No ‘Kari Ninda’ but Action on Ground: GD Bakshi on Arnab Goswami 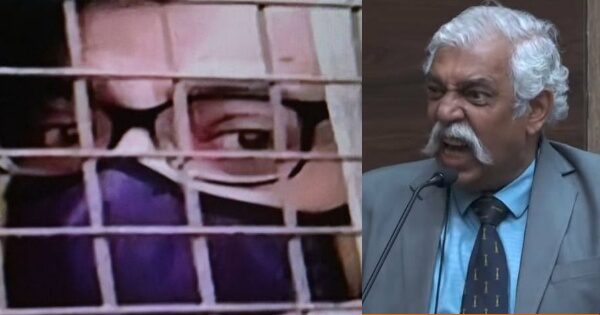 A hullaballoo emerged across the country with the arrest of Republic TV editor Arnab Goswami in the morning hours on Wednesday, dated 4th of November. He was arrested from his residence at Worli for a 2018 case that was closed and now reopened. The arrest was made by the Local Crime Branch (LCB) of the Raigad police with support of the Mumbai police.

When it comes to exposing and featuring TRUTH, Arnab Goswami and Republic Media have always been at the forefront, right from Palghar Sadhu lynching to the SSR murder/suicide case, drugs, and more. Soon after Arnab’s arrest social media burst out with ‘kadi ninda’ with lakhs of posts. Several hashtags pertaining to the arrest trended on twitter.

Amit Shah tweeted thus, which garnered around 37000 plus retweets in nine hours: “Congress and its allies have shamed democracy once again. Blatant misuse of state power against Republic TV & Arnab Goswami is an attack on individual freedom and the 4th pillar of democracy. It reminds us of the Emergency. This attack on free press must be and WILL BE OPPOSED.” 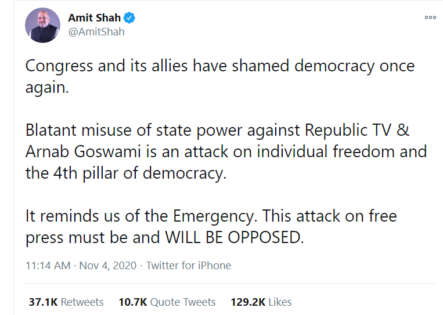 States spokesperson of BJP, Gaurav Goel tweeted thus with two photographs: “Can’t believe he is #ArnabGoswami. If it’s real…..Maharashtra Govt has asked for the dooms day.” 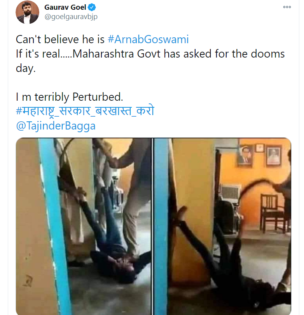 Shefali Vaidya tweeted, “If you support #ArnabGoswami, change your DP to this picture for a day to express your solidarity with Arnab and @republic. I have done that. Will you join me?” In another tweet she wrote, “Get this. @MumbaiPolice is asking for FOURTEEN days police custody for #ArnabGoswami, in a case that was already CLOSED, while the @ShivsenaComms shared power with @BJP4Maharashtra and which has been reopened now.” 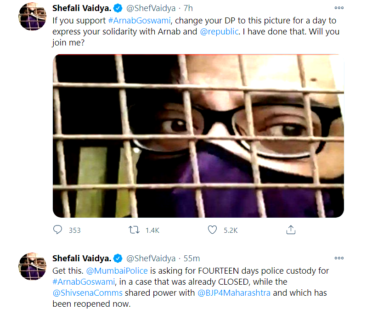 Citizens across the country gathered at major spots to protest against the arrest of Arnab Goswami. Maj Gen GD Bakshi joined other protestors including Supreme Court lawyer and activist Subuhi Khan and Journalist and social activist Pushpendra Kulshrestha.

In another Facebook post Maj Gen GD Bakshi wrote, “We will Fight. We are not going to surrender our FREEDOM of SPEECH and Freedom of the PRESS so easily. We will NOT Let this become Xi Jinping’s China. Indian Democracy is 2500 years old. You think some Jhonny Come lately can snuff it out so easily? Declare emergency from MUMBAI? Get to Delhi first. I’m going to Jantar Mantar to protest”. 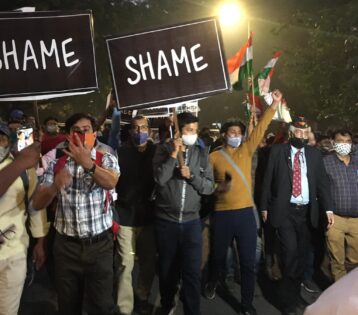 Earlier in the morning, soon after the news of the arrest of Arnab Goswami spread like wild fire, Maj Gen GD Bakshi wrote, “Congratulations – India has just Become a Banana Republic!

“A state satrap sitting in Mumbai has cocked a snook at Delhi and is trying to say the Central Govt and the courts are powerless – just a Joke for him. This is utterly amazing. The whole world is watching while a state Govt imposes EMERGENCY on the whole country and the rest of Us watch supinely. It is OUR Freedom of speech that is under brutal assault. What distinguishes us from China is our freedom of the Press. A state govt and its Cop have just gone berserk and showed up the rest of the Indian central govt enterprise to be a tooth less joke that cannot stop his personal vendetta. This EMERGENCY is now Being introduced not from Delhi but MUMBAI for Gods sake. Our national capital  has just been changed.

“Look if we are silent now we will  forever lose our  democratic freedoms to a state satrap and his Police gone berserk. The Central Govt and the Courts cannot see that it is vendetta plain and simple. That some people sitting in Mumbai claim they have the divine right to kill anyone and if the Press raises an outcry they will jail the whole lot.

“The central Govt and the courts must now act and REDEEM themselves. They are SWORN to uphold the CONSTITUTION! I am afraid they are looking Weak and helpless right now. Time to ACT.

Only time will tell what action is being taken on ground!