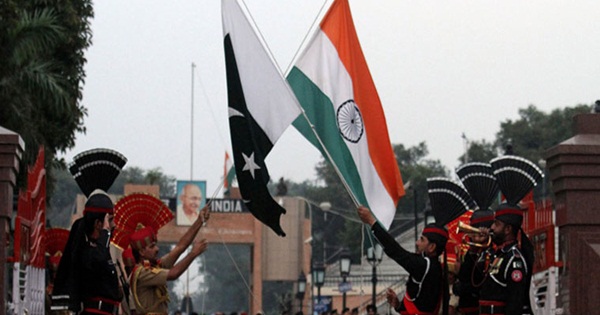 Tensions have been prevailing in the Kashmir valley for a long time. Encounters between terrorists and the armed forces of India are a never ending affair. While many a brave son of India sacrificed their lives, successful elimination of terrorists by our armed forces has seen a rise. Attack by terrorists, stone pelting, border ceasefire violations are but humdrum incidents in the Kashmir valley. Almost every day our soldiers are martyred during counter-terrorist operations, ceasefire violations, and terrorist attacks. Stone pelting has injured hundreds and thousands of our soldiers. Do our soldiers deserve this? Can a peace talk between India and Pakistan solve the issue?

So a peace talk between India and Pakistan is proposed. That too after a BSF soldier’s throat was slit by Pakistani troops along the international border near Jammu? BSF head constable Narendra Singh’s body was badly mutilated by the Pakistanis. He had gone near the fence to clear tall elephant grass despite unprovoked firing by Pakistanis. Singh and his team retaliated, tactically extricating themselves.

Shah Mehmood Qureshi, the new foreign minister under Imran Khan government of Pakistan said that dialogue is the only way forward for ties between Pakistan and India. The Pioneer reported, “There is nothing to get excited over the reported statement by Pakistan’s Minister for Human Rights, Shireen Mazari, that the Pakistan Tehreek-e-Insaf Government was preparing a proposal for resolving the Kashmir conflict and that it would be ready in a week.”

In this regard, Maj Gen GD Bakshi said, “The MEA has just told us what it thinks of Ordinary, idiotic Indians who cannot quietly accept one of their soldiers being slaughtered- having their eyes gouged out and throat slit. He signed up for it- so pipe down. How can emotional Indians be allowed to come in the way of Gandhian peace talks for which someone could get the Noble peace Prize? Don’t u know that the 150th anniversary of Mahatma Gandhi is coming? As per MEA we should just shut up and let the Lofty Indians in South and North block do the thinking for us. How does public opinion matter in India? it can be treated with utter contempt. People will shout and cry for two days. We will then toss some coins to the crying families and they will all shut up. We will go on with talks for which we seem to Have made a commitment to Donald Trump. That’s far more important than public opinion in India. it is the sheer arrogance of it which hurts. who cares for the opinion of an ordinary Indian? Who cares for the life of an ordinary soldier? We are just MEETING we are Not talking!! Terror and talks don’t go together- remember?” 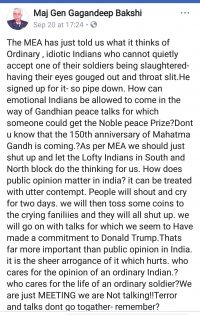 The military control line between the Indian and Pakistani controlled parts of Jammu and Kashmir which was called Ceasefire Line was redesignated as Line of Control following the Shimla Agreement of 1972 signed between Indira Gandhi, then PM of India and President Zulfikar Ali Bhutto of Pakistan. Though India won the 1971 war against Pakistan with 93,000 Pakitani soldiers taken as prisoners of war, these soldiers were released following the Simla Agreement. Such an easy release against the sacrifice and victory by our soldiers! Mrs. Gandhi didn’t ask for Pakistan occupied Kashmir to be returned against their release! The Kashmir problem would have been solved then!

Thereafter, there have been a series of attempts to improve ties between the two nations, but every peace talk failed. So, will the recently proposed peace talk bear fruit? Major talks were the Shimla summit, Agra summit and Lahore summit. After the Siachen conflict, ties worsened further that led to spiraling of Kashmir insurgency in 1989. So did matters worsen after Indian and Pakistani nuclear tests in 1998 and the Kargil war of 1999. Ceasefire agreement between the two nations brought no results either. Terrorist attacks only intensified, starting from 2001 Indian Parliament attack to 2007 Samjhauta Express bombings. Who doesn’t know about the 2008 Mumbai attacks carried out by Pakistani militants? What about the 2016 Pathankot attack on an Indian military base that led to martyrdom of 19 Indian Army soldiers?

Maj Gen GD Bakshi further wrote on his Facebook timeline, “Hope u saw Arnab’s debate on these peace overtures from Imran and our acceptance. The timing of the Foreign ministry’s announcement was horrible. We just had our Boy Mutilated. The govt tried to hide it. Why peace behind the backs of the Indian people? Will peace with Pak make the Govt popular? I am afraid not because you can rest assured you will be stabbed in your Back. The deep state has always worked at cross purposes with its civilian facade. The Paki army has a stake in continued hostility with India. it will never let it happen. Imran is being used by the deep state to gain respectability for a pariah terrorist state. Are Obliged to Give PAK THAT RESPECTABILITY? We are making a huge mistake. It’s not too late to correct it. We won’t die if we don’t talk for a while and just observe things. Let things pan out. Let Paki actions speak louder than words.” 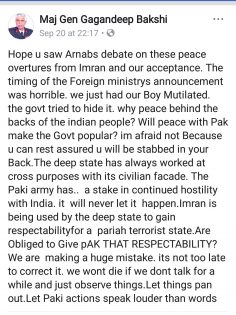 Let us take a recent example on how dialogues between India and Pakistan work. On the 4th of June 2018, a flag meeting was held between sector commanders of BSF and Pakistan Rangers for two hours in Suchetgarh. What was the reason of the meet? To talk about maintaining ceasefire on the international border (IB) in Jammu and Kashmir. What was the result? Within hours of this flag meeting, Pakistan Rangers fired mortars at Indian positions in the Akhnoor sector at around 1 a.m. Did peace talk help? No! And it was Pakistan who took lead in violating the ceasefire!

Eight days after agreeing to maintain ceasefire, i.e on the 12th of June 2018, Pakistani Rangers resorted to unprovoked firing in Chamliyal area. The firing started at 10.30 pm and continued till 2 am. Chamliyal is located in Samba district of Jammu and Kashmir. The result? Four of our jawans are martyred.  Four Border Security Force (BSF) personnel, including an assistant commandant sacrificed their lives to the ceasefire violation. Among the martyrs were Assistant Commandant Jitender Singh, Assistant Sub-Inspector Ramniwas, Constable Hansraj Gurjar, and Sub-Inspector Rajneesh Kumar.  Besides, three jawans were injured in the firing.

Pakistani army were all in smiles at the loss of our jawans at the border. In this regard, Maj Gen Gagandeep Bakshi wrote on his Facebook timeline, “Today the Paki army officers were all smiles on Republic TV. They were gloating over the death of 4 of our BSF Bravehearts. It boiled my blood. This shameless ceasefire is now becoming a monumental mistake. Pak has just killed 4 BSF bravehearts. Yet because of sheer Pig headedness and the attitude That Indian people are fools- we know best and will become very popular by Kowtowing first to China and Now Pak- we are persisting with this ridiculous cease fire. Why are we going for a stove piped and compartmentalised response? Why should the BSF alone respond to The Rangers and only with small arms and mortars? These do very little to soldiers in bunkers. They usually kill civilians. Why for Gods sake are we NOT using our artillery.? We had used it to good effect in 2003 and forced Pak to cry uncle. Like Nehru does this govt want to reduce our entire response to the police level of small arms alone?Nehru did not want an army. He said the police alone will do. why are we falling back to the Nehruvian era of Pacifism.? the time has come to hit back and Hit Back Hard. and if This govt thinks this Gandhianism is making them popular with the people- then they are living in La La land. Please , for the sake of national self respect lets now at least hit back HARD. pl stop this RIDICULOUS cease fire and Chonchle bazi. The Paki Officers were all smiles today on TV . lets wipe those bloody smiles off.The Big guns are meant to be USED not just showed on Republic day parades.USE them Damn it. Dont let the Country down”.

News hit the headlines in January 2013 when two Indian jawans killed during an attack by Pakistani troops across the Line of Control (LoC) in Jammu and Kashmir were brutally decapitated. They were Lance Naik Sudhakar Singh and Lance Naik Hemraj. One head was severed and another body was beheaded and the severed head of Sudhakar Singh was not recovered then.

And then the surgical strike on militants happened in late September in 2016 after they attacked an army base in Uri killing 18 jawans. Indian security forces went across the de-facto border in disputed Kashmir and killed 38 terrorists and 2 Pakistani soldiers. Lieutenant General (retired) DS Hooda was the architect of this strike. This was done in the wake of increase in infiltration bids along the LoC.

Since then there has been silence. Cross border confrontation has been a long standing issue at the border area in Jammu and Kashmir. No peace talks have ever solved the issue. Civilians residing in the border areas are worst hit so are the jawans whose lives have been at stake. Every other day our jawans are martyred. Aren’t the lives of our jawans precious?

In 2003, a ceasefire agreement was agreed upon between General Pervez Musharraf and Prime Minister Atal Bihari Vajpayee. But this agreement seems dead for a long time, as ceasefire violations along the heavily militarised LoC has become a norm today.

Maj Gen GD Bakshi had said, “What has been happening in J&K is no freedom struggle. It has been a rabidly communal movement which has led to the radicalization and abject ghettoization of the valley and the ethnic cleansing of some 450,000 Kashmiri Pundits. This communal agenda fuels the daily stone pelting, arson and mob- violence. The valley has become a vast ghetto, even as the Ghettos in Paris or Brussels, which have become no-go areas for the police and security forces. We cannot let our will to govern our territory evaporate so easily. We cannot permit some separatists to interfere with the legitimate CT operations of the Security Forces. And we cannot accept the state’s authority being flouted so brazenly- just exploiting the softness of the Indian state.”

According to a report, Pakistan has been provoking the youth and children in the valley to resort to stone pelting. Pakistan has even resorted to using social media platforms to provoke Kashmiri youth groups to pelt stones at security forces, notifying them beforehand whenever any encounter is to take place at a particular location between security forces and terrorists.

According to a data on CRPF jawans injured in stone pelting, tweeted by Major Gaurav Arya, there were 2641 stone pelting incidents leading to injury of 1289 jawans. “Every Indian must know what our Jawans face. This is the price of our freedom,” tweeted Major Arya.

Against such a situation and with our soldiers at the border attaining martyrdom almost everyday, is the peace talk between India and Pakistan justified? Should India go for more surgical strikes? Pakistan regularly violates the ceasefire agreement and our jawans get killed. Life of even one jawan is precious for us. It is time India takes action instead of peace talks! Jai Hind!