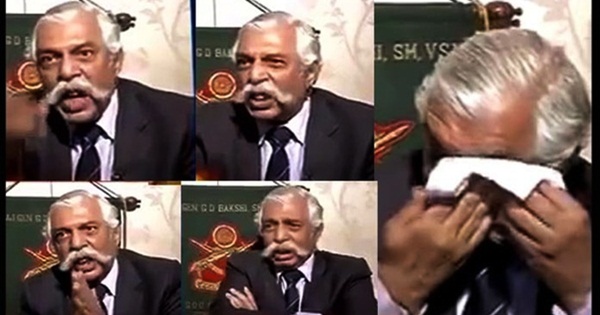 Maj Gen GD Bakshi! He considers Bharat Mata his mother and the Indian Armed Forces his family. News of martyrdom of our jawans at the border and elsewhere brings tears to his eyes. This emotional connect for fellow brethren can happen only with a Nationalist, a son of the soil. It is but unfortunate that when Vistara Airline posted an image of Maj Gen GD Bakshi with two of their staff on its twitter account, the anti-India forces, the so called leftist liberals (as quoted by Maj Gen GD Bakshi), lashed out with a shower of tweets against it. Vistara Airlines was forced to delete the tweet. Is it a crime in India to post such? This happens only in India unlike many other countries where serving and retired soldiers are honored on board! Few days back, Swara Bhaskar tweeted about him as a ‘national embarrassment’.

Maj Gen GD Bakshi has been tirelessly working towards spreading awareness about Netaji’s role in India’s freedom struggle. He is an author of 37 books on topics ranging from military to non-military. He has contributed over 200 papers in numerous prestigious research journals and national newspapers.

He was honored five times including the Vishisht Seva Medal for commanding a battalion in operations in Kargil and the Sena Medal for operations in Kishtwar. Maj Gen (Dr) Gagandeep Bakshi served two tenures at the Directorate General of Military Operations. He was the first BGS (IW) at HQ Northern Command (India), where he dealt with Information Warfare and Psychological Ops. He was an Instructor at the IMA Dehradun, Staff College Wellington and the prestigious National Defense College, New Delhi. He appears regularly on TV talk-shows as a military analyst. He is the editor of the Indian Military Review.

Rajouri Poonch sector is one of the most disturbed regions in Jammu and Kashmir. It was once a prosperous city and trading centre and capital of an erstwhile kingdom dating back to several hundred years before BCE. This mountainous terrain stands at 2,500 feet to 15,000 feet, mostly covered with dense forests. The First Kashmir War took place in November 1947 between India and Pakistan with Pakistani raiders capturing Rajouri. Over 30,000 Hindus and Sikhs living in Rajouri were killed by the Pakistanis. The 19 Infantry Brigade of the Indian Army recaptured Rajouri on 12 April 1948. Around 1,500 residents who had fled the town during the Pakistani raid returned. In 1965, Pakistanis again infiltrated into the Muslim majority area of Rajouri Poonch in 1965. War followed with India capturing Haji-Pir Pass territory of Pakistan; but this area was restored to the enemy country under the Tashkent Agreement. During the 1971 Indo-Pak War, holding operations were carried out in this sector. Having failed in war, Pakistan this time infiltrated into Rajouri Poonch by implanting not only Pakistani terrorists but also recruiting local Muslims as terrorists. They started creating disturbances and since then terrorism has been rampant in this sector. During his posting in Rajouri Poonch in 2004-’05, Maj Gen GD Bakshi and his team eliminated 108 terrorists.

Kishtwar finds mention as Kashthavata in Kashmiri historian Kalahana’s Rajatarangini in Sanskrit. Who doesn’t know about the mass Kashmiri Pandits exodus of 1990? Do you know Pakistani backed terrorists planned an ethnic cleansing of Dogras from Kishtwar in line with the KP exodus? The incident of the horrible ethnic cleansing of the Kashmiri Pandits from the valley was blanked out from the media. There was a mass genocide of the Kashmiri Pundits by the local Muslims which led their fleeing from the valley. The actual number is in lakhs but according to official figures, about 62,000 Kashmiri migrant families have registered with the government. 40,000 of them are registered in Jammu, 20,000 in Delhi, and 2,000 in the rest of India. It is unfortunate that they are still living as refugees in their own country.

According to an account by Maj Gen GD Bakshi, in the year 2001, there were around 60,000 Muslims and 40,000 Hindus, majorly Dogra Hindus in Kishtwar. It was Pakistan’s plan to replicate the ‘successful ethnic cleansing of Kashmiri Pandits from Kashmir’ model in Doda Kishtwar region. It was to stall talks of the Owen-Dixon Plan to partition Kashmir along the Chenab Valley that the ISI deliberately attempted the ethnic cleansing of the Dogras from Kishtwar. Maj Gen GD Bakshi went on to command a Brigade in intense CT (counter terrorist) operations in Kishtwar in Oct 2000. He wrote a book Kishtwar Cauldron, which has a detailed account of those grim operations.

According to a review of the book Kishtwar Cauldron by Neeraj Jadaun, “Kishtwar has rugged and snow peaked mountains. In south it touches HP, in east it touches Kargil district and in west it is bounded by Pir Panjal range. Kashmiri terrorists first came to Doda in 1991 to escape the pressure of Indian Army. Doda region did not have any army presence that time. Soon ISI realized the importance of this region. Terrorists started using its high pastures as safe haven. In 1993, the terrorists carried out the massacre of 14 Hindus in a bus near Hasti near Kishtwar. By 1994 the civilian administration was fully paralyzed and terrorism reached its peak in Doda. 800 Dogra families migrated to HP. Rashtriya Rifles and CRPF were allocated to his region. To prevent mass migration of the Dogra minority, the Village Defence Committee (VDC) was revived and some 330 villages were brought under the protection of VDCs by issuing weapons (mainly archaic but sturdy 303 rifle) to local Hindu youths and the ex servicemen of these villages. The massacres of Dogras resumed after some lull in 1995 and 1996. In July 1998 about 64 Dogras were massacred at three places. There was a kind of cat and mouse game between government and terrorists and Dogras were caught in between. The massacres continued unabated and about 50 Dogras were killed in 2000. From 1993-2001 a total of 229 Dogras were systematically massacred in this region in order to cause ethnic cleansing of this region. The Human Rights body did not utter a single word on this brutal attempt of ethnic cleansing.”

“Maj Gen GD Bakshi immediately brought the situation under control. The tide turned in 2001. 13 Hindus (Dogras) including women and children were mercilessly killed by the terrorists in August 2001 in Kishtwar. General Bakshi took it very seriously and used all the forces under his disposal to track down the terrorists and by September 2001 all the terrorists involved in this massacre were extirpated. There was no massacre of minorities after Sept 2001 in this region.”

Maj Gen Bakshi recounts the harsh struggle to protect the population from the genocidal attacks and the strenuous attempts made to prevent their large scale exodus to Himachal Pradesh. He gave Pakistan a fitting reply by exterminating the terrorists. He ruthlessly tracked down all the terrorists and killed them, numbering 108. Out of the 108 terrorists killed, 60 were Pakistan sponsored, 40 percent local Muslims and the rest Sudanese and Afghans. After all terrorists were killed, the Hindu Dogras who had fled to Himachal Pradesh returned to Kishtwar. Maj Gen GD Bakshi dealt with the issue of terrorism with an iron hand in this sector, thus setting an example. For this successful operation, he was awarded the Sena medal. His battalion won numerous awards including Ashok Chakra by Nayak Rambir Singh Tomar.

The citizens of India hardly know about the first intrusion by Pakistanis in Kargil in 1991. It happened during the Congress regime. This incident of intrusion was kept hidden by the media. The citizens of India have every right to know about this. According to an account by Maj Gen GD Bakshi, who was then posted in Kargil, he and his regiment attacked the Pakistani territory. With one light batter heavy mortar, five 81 mm mortar platoon, 4 anti tank guns, 4 air defence guns, the Indian Army under the commandment of Maj Gen Bakshi attacked two villages in Pakistan – Shakmua and Thanus. The Pakistani Army had taken refuge in these two villages. The Indian Army destroyed the Pakistani battalion headquarter, killed 45 Pakistanis and wounded 140 plus. Six Indian Army soldiers attained martyrdom and 25 were wounded. After a talk of ceasefire, operations stopped. Maj Gen GD Bakshi (honored with Vishisht Seva Medal) and his regiment won 25 awards including Vir Chakra and citation from the Chief of Army.

Do you know Maj Gen GD Bakshi is also a spiritually enlightened personality? It all started during his foremost years in the military service, when he was yet to be married. His posting in the Himalayan region facilitated his search for the quest of life, of searching for a Guru. He met many Gurus of his times then, but none could fulfill his thirst for the enlightenment he was seeking. He even wandered in the jungles of the forests and in the snowy peaks hoping to come across some Yogi, but in vain.  He also tried meditating on his own, but could never give shape to it. It was Swami Pranavananda of Patne Devi forest located in Chalisgaon of Maharashtra who fulfilled his thirst for enlightenment. Maj Gen GD Bakshi’s recently published book Kalki Tu Kaha Hai is a tribute to Swami Pranavananda. The book also deals with the Kalki consciousness of a civilisational renewal and explores the ancient science of kundalini.

Maj Gen GD Bakshi wrote two books on Netaji Bose, based on extensive research. These are Bose: An Indian Samurai and Bose or Gandhi: Who Got India Her Freedom? Maj Gen Bakshi is also a poet. He was shortlisted for the Rabindranath Tagore Literary Prize for his poetry book Dances with the Cranes. The poems in Dances with the Cranes deal with the theme of reincarnation. He wrote this collection of poems when he was fighting intense Counter Terrorist operations in the rugged mountains of Kishtwar. He had to see a lot of death and dying and this led him to pen these poems. Essentially they are poems of hope – for they talk of life beyond death.

As aforementioned, the list of achievements by Maj Gen GD Bakshi is unending. After Vistara Airlines deleted the tweet, they sent two senior officials to his house to tender an apology over the tweeting incident. Maj Gen GD Bakshi wrote on this on his Facebook timeline: “It was very nice of Vistara airlines to send two senior Officials to my house to tender an apology over the Tweeting incident. It was a thoughtful gesture of Consideration for the feelings of an Old soldier. I was very happy to see that Indian airlines have started emulating their American Counterparts by Honouring Serving and Retired soldiers on Their aircraft. The Americans go out of the way to welcome them and thank them for SERVING the country. This was catching on in India and has enraged some so called Leftist Liberals. They were ILLIBERAL enough to put spiteful tweets against me which threatened to boycott Vistara. Vistara were frightened enough to take down their tweet about Welcoming me. I thought they should have stuck to their Guns in Honouring Military war veterans. In any case they came now and said sorry and in the army way that ends the issue. A simple sorry ends the matter as far as Vistara is concerned. I do Hope they will continue to honour all military Personal who travel with them.” 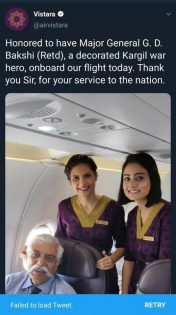 “I am not sure about those Virulent haters of the Indian Armed forces, who try to Masquarade as the Voice of the nation. They are a little hopelessly out of Touch with The Public opinion and PULSE in this country. They need to look within and REFLECT. A quantitative analysis of tweets for and against Gen Bakshi would be highly illuminating democratic exercise and show just who is FOISTING his views on Whom!”

Regarding the tweet by Swara Bhaskar, he said, “I was quite surprised to read this. Her father was a naval commodore. He is an intellect. I have regards for her father.”