Battle for Sanskrit: Why this Ancient Language must be Mainstream 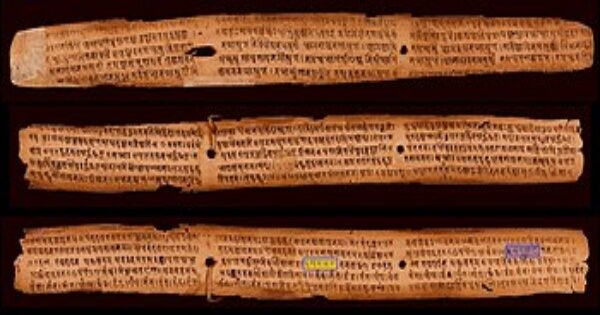 “Sanskrit language, as has been universally recognized by those competent to form a judgment, is one of the most magnificent, the most perfect, the most prominent and wonderfully sufficient literary instrument developed by the human mind.”- Sri Aurobindo.

“The language of Sanskrit is of a wonderful structure, more perfect than Greek, more copious than Latin and more exquisitely refined than either. Human life would not be sufficient to make oneself acquainted with any considerable part of Hindu literature.”- Sir William Jones.

Shri Rajiv Malhotra, a great Bharatiya scholar and expert in Bharatiya civilization, writes in his book “The Battle for Sanskrit” about the importance of Sanskrit revival in developing ourselves socioeconomically, scientifically, and technologically advanced in every field while preserving the great heritage. After reading this article, you will understand why you should read this book.

There are those among Western and Western-based Indologists who are leading an aggressive and well-organized movement to position Sanskrit study as a political battleground. They claim it is laced with toxic elements that support Vedic, Brahminic, and royal hegemony, as well as oppressive views of shudras, women, Muslims, and all those who can be construed as ‘others.’ They regard Sanskrit as a repository of Vedic knowledge (shastra) or politically motivated literature (kayva), all of which should be studied as curious relics of a bygone era. They consider oral tradition to be marginal. Attempts to resurrect Sanskrit as a living language are seen as associated with Hindu violence and hostile to oppressed masses.

Sanskrit study centres that had previously been relocated from India to Europe have now relocated to the United States. The majority of academic Sanskrit research is now conducted and driven from the United States. This research is being conducted through the lens of Western perspectives and theories, which Rajiv ji refer to as ‘American Orientalism.’ Young social scientists are being trained for this new mission, which aims to create new prescriptions (like smritis) that are ostensibly “detoxified.” If current trends continue, India will be an importer of knowledge about its own civilization rather than a leader in the discourse about itself.

Simultaneously, westerners from a wide range of disciplines and walks of life are exploring ancient Sanskrit for its philosophical sophistication, spiritual guidance, and potential for expanding systematic knowledge in fields ranging from physics to mind sciences. Westerners have a vested interest in Sanskrit studies in order to extract the civilization’s underlying cultural wealth accumulated over millennia.

In other words, the study of Sanskrit language and sanskriti in the West is being taken over by two distinct vested interests: (a) social scientists and humanities scholars seeking to reinterpret India’s past and re-engineer its future by exhuming the toxicity they perceive in Hindu Dharma; and (b) scientists, environmentalists, spiritual seekers, self-help experts, and ‘new thought gurus’ seeking to mine its treasury of knowledge.

Sanskriti must be revitalised on multiple levels and in various ways. Even those who do not become fluent in Sanskrit can learn important non-translatable words and concepts. It is critical to explain and argue why common translations (for example, ‘atman’ translated as’soul’) are false, misleading, and confusing when used in a Western context.

The goal should be to infuse these Sanskrit terms into the English idiom so that the words and ideas they represent become part of the English mainstream discourse. We can Sanskritize English to some extent by incorporating Sanskrit words and concepts into everyday language. When our ideas are translated in the West today, they are almost always taken out of context, disconnected from the source, and reintroduced as part of Western thought. The preservation of Sanskrit terms, as well as the correct history and metaphysical framework, should aid in preventing such hijacking.

Shastras must be seen as a platform for innovation

The shastras of the past are encyclopaedias and databases that contain the intellectual work done to date and are written in Sanskrit language. Many specialised fields of knowledge are covered within the shastras, including architecture, astronomy, ceramics, chemistry, ethnics, jyotisha (broader than astrology), mantra, medicine, metallurgy, philosophy, and psychology. All await study by experts.

This knowledge must be placed in a modern context, scientifically tested where possible, updated, and used as the foundation for future extensions and developments. The goal is not to recite old verses out of chauvinistic pride, but to solve contemporary problems by combining Sanskrit with new knowledge. The shastras were never permanently frozen or sealed. They were constantly challenged by rivals and kept alive as dynamic bodies of knowledge that evolved with new evidence.

Unfortunately, traditional experts are becoming increasingly scarce, and those who remain spend the majority of their time reproducing old texts rather than developing new ones. As a result, the majority of research into the knowledge embedded in shastras is done by westerners, with little regard for preserving the culture from which it arose. The Sanskrit language tradition has lost social and economic capital as a result of this.

Vedanta is the main domain of shastras that is alive and well today. This is referred to as moksha-shastra. The pursuit of moksha must be infused into various vyavaharika practises and not seen as something separate. The paramarthika and vyavaharika realms are inseparable. The various shastras are a unified body of knowledge that must be approached in a holistic manner. As a result, the shastras pertaining to various vyavaharika realms must also be prioritised. Pollock, Western Indologist, interestingly, attacks shastra precisely because it is integrally and holistically unified with Vedic cosmology. We must resurrect and keep them united for the same reason he despises them. bear in mind, each shastra is based on a distinct intellectual tradition.

Repositioning Sanskrit language as the foundation of an Indian Renaissance is intended to revitalise the art of writing smritis.

For example, we need new itihasas to describe two long-lived traumatic events that occurred over the last 1,000 years: the Islamic invasions, which peaked with Aurangzeb’s rule across most of India, and British colonialism from the eighteenth to the twentieth centuries. It is necessary to research the method by which such itihasas are written. Today, we can apply this genre in practical ways. The Mahabharata, for example, speaks not only of politics but also of the lessons to be learned from trauma at various levels: individual, group, community, social, and so on. All of this must be placed within a much larger framework, the Veda itself. This would effectively decolonize Indians and allow for a better understanding of India’s past.

As part of the Indian Grand Narrative project, we must also present the Indian history of science and technology. All knowledge we have of our past, dating back to the Indus-Sarasvati Civilization, must be written down, both analytically and as itihasa, and widely disseminated.

The Sanskrit ecosystem must be revitalised holistically. First and foremost, we must develop a model for studying Sanskrit as part of a living system that is still practised today.

We need to understand the importance of Sanskrit and sanskriti as a Bharatiya, and this book will undoubtedly help us to understand The Way Forward. Some people and organisations are working hard to resurrect Sanskrit language. Sanskrit Bharati is one such organisation, with approximately 5000 centres in India and branches in approximately 15 other countries. Around 10000 volunteers work tirelessly to popularise Sanskrit. It has also released over 500 books and in digital format as well.

Pankaj Jayswal is an author and a blogger. He writes in English, Marathi and Hindi on topics ranging from Politics, Technology to Spiritualism, History, and more.

Yoga Class in Sanskrit? Here Is How; An Interview