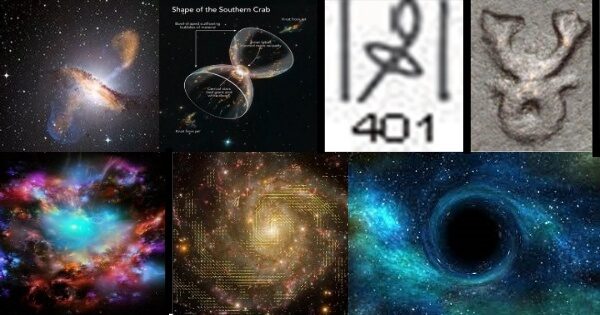 “A Steer who strives to gain his third form, Soma is, like Virāj, resplendent as a singer.

Following close to the sea, the wave of waters, the great Bull tells his fourth form and declares it.”

The third form of matter described in the hymn is Gas and the fourth form is Plasma.

Take a deep look at the above images of galaxy formation.

The Event – YAGNA, Sacrifice, the Moments of Creation. The Place – GRAHA, [the Vessel, made by Prajapati (Creator)], a Black Hole. Yes, this is what the hymns of the Rishis of RV were so vividly narrating! Yes, they were talking about the Birth of a Galaxy in more than 1000 hymns.

In a new research by Stella Offner, Assistant Professor of Astronomy at the University of Texas says, published in Space Daily website, “These galactic clouds are violent places where the magnetic waves are an important factor driving the process of star formation within the enormous clouds that birth stars. It’s an extreme environment with all kinds of different physics happening at once. Think of the magnetic lines like a rubber band stretching across the entire cloud. The winds push the field – like rubber band being plucked.”

Rig Veda described this phenomenon over ten thousand years ago! To quote from a Rig Veda hymn (05-083 – Hymn LXXXIII, Parjanya) on God Parjanya: “Forth burst the winds, down come the lightning-flashes: the plants shoot up, the realm of light is streaming. Thou at whose bidding earth bows low before thee, at whose command hoofed cattle fly in terror.”  Doesn’t it sound more terrifying than how Modern Science (MS) describes in the words of the researcher?

Fig-1: You can clearly see the two plumes high up in the space on either side of the Accretion disc.

The resultant is a Jet of GRBs (Gamma-ray bursts). Rig Veda says they are Violet in color the same color that science identifies these rays! And, not to miss out the spiral lines of the Magnetic fields!

A Black hole is in the centre of accretion disk. Modern science still believes that black holes go around scavenging, gobbling up stars that stray close, and have nothing else to do!

Accretion Disc – Pritvi (it is not our earth).

What is a black hole?  According to NASA, as described in their official website, “A black hole is an astronomical object with a gravitational pull so strong that nothing, not even light, can escape it.” Rig Veda differs with this idea. It says matter is constantly being recycled in the black hole for galaxy formation, pulled in from accretion disk and galactic space above and below the disk. According to modern science, the gravity is extremely strong inside a Black hole because matter has been squeezed into a tiny space. This can happen when a star is dying. Rig Veda (10-094 – Hymn XCIV, Press-stones) says Black holes are bored deep, and sometimes open and sometimes closed. That black hole is not a tiny place to the point of turning into singularity.

Further, according to modern science, because no light can get out, people can’t see black holes. They are invisible. Matter and radiation fall in, but they can’t get out. Rig Veda explains vividly what goes on in the black holes as if the Rishis had actually been inside them. The galaxies are born due to the black holes crunching the matter, ionizing them into Plasma and Electrons, and pelting the Electrons and sum-atomic particles out into the space where they cool down to form heavier elements that form the stars of a galaxy. Gamma Ray Bursts flash out of black holes when electrons and matter are spewed out at relativistic speeds. Gamma Ray Bursts are the most powerful lights in the universe.

But Rig Veda (10-094 – Hymn XCIV, Press-stones) says that black holes are eternal. “Your fathers (of Black holes from the previous cycle of creation- from of old), verily, stand firm from age to age: they, loving rest, are not dissevered from their seat. Untouched by time, ne’er lacking green plants and green trees, they with their voice have caused the heavens and earth to hear.” Compare this hymn with this article titled, “On the hunt for “hierarchical’ black holes” by PHYS ORG – dated 27-07-21. Black holes, detected by their gravitational wave signal as they collide with other black holes, could be the product of much earlier parent collisions. Such an event has only been hinted at so far, but scientists at the University of Birmingham in the U.K., and Northwestern University in the U.S., believe we are getting close to tracking down the first of these so-called ‘hierarchical’ black holes.

If black holes are “black,” how do scientists know they are there? According to modern science, as described by NASA, a black hole cannot be seen because strong gravity pulls all of the light into it. But scientists can see how the strong gravity affects the stars and gas around the black hole using a different kind of telescopes. A Pit in every Peach! Every galaxy has a black hole at its center.

Missing black hole! According to an Economic Times India Times news article, “On the contrary, at the exact center of the galaxy’s wide core, where a slight bump in starlight should have been, there was a slight dip. Moreover, the entire core, a cloud of stars some 20,000 light-years across, was not even in the middle of the galaxy. Oh, my God, this is really unusual.” So where has nature stashed the black hole equivalent of 10 billion suns? One possibility is that the black hole is there but has gone silent, having temporarily run out of anything to eat. But another provocative possibility, Lauer and his colleagues say, is that the black hole was thrown out of the galaxy altogether. Tod Lauer is an expert on galactic nuclei and a co-author of this paper.

But the Yajur Veda has an answer to the above predicament. Yes, the massive black hole has gone silent is the answer to it. Let me explain it a bit more.

As mentioned in the beginning of this article, Rig Veda calls a black hole, graha – a cavern-like lightless dark and deep place. Cavern means a large, dark place. Rig Veda also calls it a patra, meaning a vessel! This is where Soma is created and confined. “A Steer who strives to gain his third form, Soma tells his fourth form and declares it.” The third form of matter is Gas and the fourth form is Plasma. When matter from accretion disk and particle gas from the space above and below the black holes are rounded up by radiation winds (Maruts), they fall into the black hole, the vessel. The vessel has two stones, two magnetic fields, Asvins. Asvins are twins and cannot be separated. Magnetic poles. Savitar, the Microwave, produces Asvins, the two magnetic fields, which compress the in-falling matter. It is ionized by the tremendous heat. Plasma, Soma is produced along with Electrons, Varuna. At one point the magnetic field is collapsed by an Electric field, Indra, and when the reconnection of Asvins occurs, the ionized particles and electrons are violently expelled from both sides of the black hole! Remember the earlier mention – RV says BHs are bored deep, and sometimes open and sometimes closed. Violently expelled at near relativistic speeds they reach very high in space. In order for them to achieve such height they are guided by Magnetic twisting lines. There the ionized particles and electrons cool down, and recombine to form heavier elements forming stars and ultimately a galaxy. When a magnetic reconnection occurs, it results in a burst of Gamma Rays/Usha, the brightest light in the universe.

When there is no sufficient amount of matter falling into the black hole, it goes silent. You cannot see its existence! This is what made the scientist, Tod Lauer to wonder why the black hole is missing?

Black holes make ‘chirping’ sounds! “The black Hole Always Chirps Twice” – Credit: ARC Center of Excellence for Gravitational Wave Discovery. Source: PHYS.ORG – 11/27/2020. The article reports that when two black holes collide and merge, the remnant black hole “chirps” not once, but multiple times, emitting gravitational wave – intense ripples in the fabric of space and time – that reveal information about its shape. The author, Prof. Calderon Bustillo says, “The pitch and amplitude of the signal increases as the two black holes approach faster and faster. After the collision the remnant black hole emits a signal with a constant pitch and decaying amplitude – like the sound of a bell being struck.”

Another article titled “Newborn Black Hole” by PHYS.ORG dated 12 -09-2019, provided by MIT, says that the gravitational waves were set off by the rapid in-spiralling of two massive black holes. The peak of the signal the loudest part of the chirp linked to the very moment when the black holes collided, merging into a single, new black hole.

O Vāyu, pass thou over all the slumberers, and where the press-stone rings enter that house (BH), yea, Indra, go ye both within (Hymn CXXXV-7. Vāyu, Indra-Vāyu).

Now with our ears we catch the sound of the press-stone that rings afar (Hymn CXXXIX – 10, Viśvedevas).

And let the priest whose press-stones ring forth loudly, go down with his oblation to the river (Hymn XXXVII – 2, Indra).

O Mortar, thou art set for work, here give thou forth thy clearest sound, loud as the drum of conquerors (Hymn XXVIII-5. Indra),

“Aryaman, Mitra, Varuṇa, Parijman fill the hide full where lies the nether press-stone. For Indra-Agni the strong drops are joyful, for here in the bowl’s lap are both the press-stones.” This is from Rig Veda 01-079 Hymn LXXIX, Agni, meaning – Hide is like a bellow. The two bowls are the magnetic fields, the iron-fashioned home, black hole. They are like flexible skin, that contract or expand to confine Soma/Plasma. These two fields are two press stones facing each other, and compress the matter falling into them to millions of degrees of temperature, ionising it to produce Plasma and Electrons. When the pressure builds up beyond certain values, the black hole expels the ionized particles and the Electrons into the outer space where they recombine into stable elements that coalesce into stars, and ultimately a Galaxy is born with the black hole at the centre. 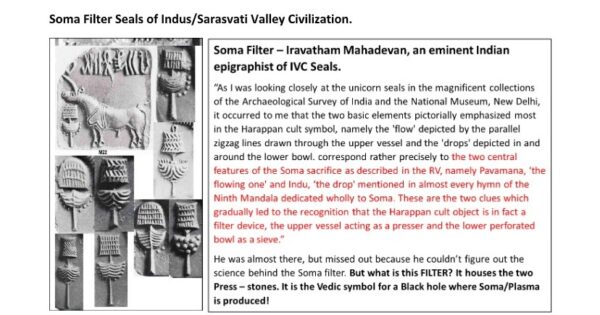 Modern science has a lot to catch up with the Vedas. I am more than sure that modern science will only immensely benefit by taking the help of the lofty science in the Vedas that would help in designing better Fusion reactors, Quantum physics, Devices with better heat dissipation by Phonons, and in Space exploration.

Vedas have enough facts to turn the theory of Cosmology and Particle Physics upside down! I can prove that the Vedic Rishis knew about Bose Einstein Condensate, Dark Matter, the seven Rishis themselves are the seven Phonons that are Acoustic excitations, and Gravitational field is the lattice/Clipped grass of the RV where the Gods do the Yagna, the Creation!

Please don’t go away. There’s lot more to come about the other Gods of the Vedas, such as Usha, the Gamma-ray bursts, Indra, the Electric field, Agni, the Photons, Varuna, the Electron, Mitra, the Proton, Rudra, the Radiation, Cows, the Quarks, Frogs, the Majorana Fermions, and so on.

Featured image: Partly provided by the author and partly sourced from Google.

Krishna Iyer is a mechanical engineer and an independent researcher on Astrophysics and Particle Physics in the Vedas.

What DNA Samples and More Tests Reveal about Ancient Indians