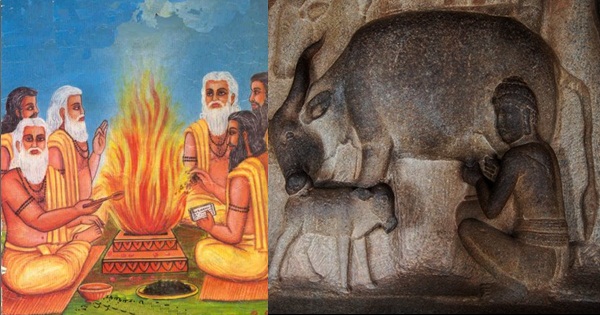 There are many evidences from the Vedas which proves that the ancient scripture never supports any violence in form of Animal Sacrifice or meat eating.

Look on all (Humans as well as Animals) with the eye of a friend (Yajur Veda).

Friend to all should the Arya be! Friend to all! Sure he cannot destroy the life of any. Therefore he is ordered in the sacred scriptures. (Yajur Veda 42-49).”

For flesh-eating, drinking, gambling and adultery, all, destroy and mar the mental faculties of a man (Atharva Veda VI.7-70-71).

They are sinners as eat raw or cooked flesh or eggs go to destruction. (Atharva Veda VIII.2-26-23).

The Vedas considers the protection of animals to be a very sacred act—so, so very sacred that it lays down that a husband should solemnly ask his wife on the occasion of marriage “to be kind to animals and to try to protect the happiness of all bipeds and quadrupeds.” In return the husband promises to do the same. Further the Vedas lays down that they who kill men or slay cows should be outlawed and ostracised (Rig Veda I.16-114).

We must also learn about the meaning of word Yajna. The Yajna word is derived from Diva which has the following meanings:

Thus Yajna may be defined as “the association of men and concentration of powers for social happiness, conquest over nature or enemy (of one’s county or humanity); promotion of the well-being of society; the propagation and dissemination of enlightened principles; the maintenance of national self-respect; the increase of national glory; and the cultivation of acts of peace and war. It may also be added that Yajna also means such concentrated effort as secures man spiritual advancement and salvation. That the word Yajna was used in the above sense by the Vedic Aryas may be established by referring to certain well-known practices of the Rishis.

A great mischief has been caused by the misinterpretation of this Yajna. To understand the true significance of this Yajna we must understand what Ashwa is. As it is usually with the Vedic words, this word has a great number of meanings. Aurovindo Ghosh has emphasized the fact that the Vedic roots have various meanings. In supporting his position he has referred to the words ‘Chandra’ and ’Gau’. Ashwa according to the Shatapatha Brahmana (XIII.3.3) means God. Taking hold of this meaning we can without the least hesitation say that Ashwamedha has spiritual significance. Ashwa means horse as well as all such physical forces which can enable us to move quickly. In another place we read Ashwa, the Agni (heat) carries, like the animals of conveyance, the learned who recognize its distance-carrying properties (Rig Veda 1.27-1). This idea is also supported by Shatapatha (III.3.29-30). On this principle Pt. Gurudatta translates the hymn of the Rig Veda. His translation of the opening verse is as under:

“We will describe the power generating virtues of the energetic horses endowed with brilliant properties or the virtues of the vigorous force of heat which learned or scientific men can evoke to work for purposes of appliances (not sacrifice). Let not philanthropists, noble men, judges, learned men, rulers, wise men and practical mechanics ever disregard these properties.”

Ashwamedha also refers to polity. Political wisdom should so pervade the notion as Ashwa (God) pervades the universe. This is supported by the Shatapatha in the following words: “A king administers justice to his subjects, governs them properly, encourages learning among them, and performs homa by throwing the samagri (odoriferous materials), clarified butter in fire. This is Ashwamedha.”

The greatest argument in favor of this translation is that in it there is nothing immoral, obscene and disgusting as is to be seen in the sacrificial translation. The Mimansis—our great authority on interpretation—say that we must always take for granted that the teaching of the Rishis are always reasonable and rational.

It is a well-known fact that from ages immemorial the Hindus have been looking upon the cow as a sacred animal, so much so that they call it their ‘Mata’ (mother). One cannot conceive how this people could have ever offered their most sacred animal to fiendish gods. But the priests and orientalists say so; and for their statement they find support in the Shastras. As in the case of Ashwamedha so also here their dogmatism is founded in ignorance of the true significance of the words, ‘Go’ and ’Gomedha.’ Gomedha Yajna, therefore, is the method of improving, controlling and purifying speech. Go means earth. This meaning is also given in Nirukta. It also can be seen in such English compounds as Geography, Geometry, Geology, etc. (the hard sound being changed up soft one). Therefore Gomedha means cultivation and purification of earths.

Go means ray of light. This would make Gomedha, a science which teaches us the proper use of the rays of the sun and moon. This meaning of Go is clear from Gotaw which is another word for the moon (Chandra). Go means a sense. This meaning can be seen in the Sanskrit word Go char, which means the range or object of our senses. With this meaning Gomedha becomes an attempt or effort to control one’s senses.

That the above meanings are the real ones is proved by the following passage of the Shatapatha Brahmana as given by Swami Dayanand:

That Gomedha cannot mean cow sacrifice could be established by referring to:

(iii) Nighantu (1-8) wherein a Yajna is said to be Adhvara or such act as does not permit any kind of injury.

Thus, it’s clear by the evidences from Vedas as well as related texts that Vedas do not support animal sacrifice in any way.

Well, then, may it be said that the practice of killing before God and in His name His own creatures being against Ahimsa is decidedly irreligious!