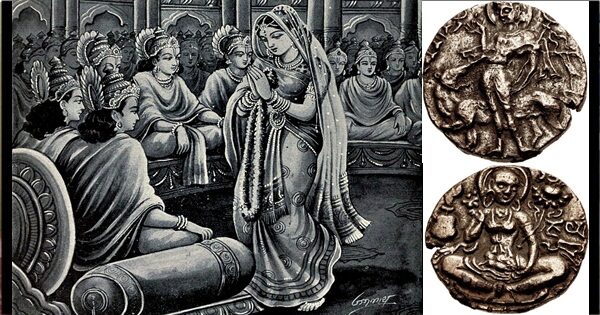 Meghavahana and Amritaprabha! One was the prince of Kashmir from the Gonanda dynasty and the other the princess of Pragjyotishpur (Assam) from the Varman dynasty. While Meghavahana traced his lineage from Gonanda of Kashmir, Amritaprabha belonged to the lineage of Bhagadatta, the descendant of Narakasura, the son of Prithvi (rescued by the Varaha incarnation of Vishnu). Meghavahana married Amritaprabha in a swayamvara ceremony in Assam more than 2000 years ago.

Swayamvara is a ceremony wherein a bride of marriageable age chooses the groom of her choice from a group of suitors. This practice was followed in ancient India. Kings in ancient India often invited princes of various kingdoms to attend the swayamvara ceremony of their daughters. The princess would thus choose her groom from amongst the group of assembled princes. Rama and Sita, Nala and Damayanti, Pandu and Kunti, Arjun and Draupadi married through swayamvara.

In recent times, a swayamvara ceremony was witnessed at Ghumka, a remote village in Durg district of Chhattisgarh, featured in a 2018 Hindustan Times report. Ramratan Thakur, the bride’s father announced a month back ‘to marry off his daughter to a youth who would successfully reply to questions related to the creation of human beings’. Around 15,000 suitors assembled in an open ground at Ghumka where Ramratan Thakur asked each suitor his questions. To quote from this report, “a tribal youth Ghanaram successfully answered a question ‘Panchtatva rachi adham sharira, chhiti jal pawak gagan sameera’ (The body is made of five elements – earth, water, air, space, fire)…. Amid clapping and religious chants, the girl who was wearing a bridal dress and seated on a chair waiting for her life partner, stood up and walked up to Ghanaram and garlanded him.”

The swayamvara of Meghavahana and Amritaprabha finds description in several historical records including the Rajatarangini by Kalhana. Meghavahana came from Gandhara of modern Afghanistan to attend the ceremony, which corroborates the existence of the Uttarapatha, currently known as GT Road, connecting kingdoms since pre-Ramayana times. Our history textbooks don’t describe about ancient India or about the connect of the kingdoms from north to south, east to west. Assam and the Northeastern states hardly find a place in the textbooks.

The ancient name of Assam is Pragjyotisha or Pragjyotishpur that finds mention in the Ramayana, Mahabharata, Harivamsa, Vishnupurana, Brahmandapurana, and more ancient texts. Later it came to be known as Kamrupa and Kamata and then Assam. Kamrupa, which finds mention in the Kalika Purana and other records, draws its name from Kamdev and also from Goddess Kamakhya. According to legend, it was at a small hillock called Bhasmacala in the middle of the Brahmaputra River in Guwahati that Kamdev interrupted Shiva’s meditation many thousands of years ago. Shiva burnt Kamdev to ashes with his anger. This hillock is also known as Peacock Island – the world’s smallest inhabited river island.

Amritaprabha was the daughter of Raja Balavarman and Rani Ratnavati of Pragjyotishpur. Balavarman, a Vaishnavite, was a contemporary of Samudragupta. According to the book Chronology of India by Vedveer Arya, the Guptas flourished during the last three hundred years of BCE. Balavarman was the third ruler of the Varman dynasty, which is described in the Doobi and Nidhanpur copperplate inscriptions. The kings of this dynasty trace their ancestry to Narakasur, Bhagadatta and Vajradatta of the Bhauma or Naraka dynasty. Vajradatta sided with the Kauravas in the Mahabharata war. Narakasur involved in a battle against Krishna; he was killed by Krishna and Satyabhama.

Meghavahana was the son of Gopaditya, a descendant of the blind Yudhisthira, a king of the Gonanda dynasty of Kashmir. This dynasty was established by Gonand, who was a contemporary of Pandav prince Yudhisthir and a relative of Jarashandh, the ruler of Magadh.  He finds mention in the Mahabharata. After Yudhisthira of Kashmir was deposed by his own ministers, Kashmir fell in the hands of another dynasty. This dynasty ended with the rule of Jayendra who had no children. Aminister named Sandhimati ascended the throne of Kashmir after Jayendra. But he was unfit to be a ruler and spent most of his time in forest retreats. During this time, Gopaditya lived in exile in Gandhara. It was during his exile that Gopaditya heard about Raja Balavarman holding a swayamvara ceremony for his daughter Amritaprabha. Gopaditya wished for a strong marriage alliance for regaining back Kashmir. Considering the swayamvara an opportunity, he sent his son to Pragjyotishpur as a suitor. Raja Balavarman had already invited princes from several kingdoms as suitors.

During Sita’s swayamvara in Mithila, Raja Janak invited princes from several kingdoms. To choose the right groom, he used the the bow gifted by Shiva to Parashuram. This divine bow was in his possession. A competition was organized wherein, the suitor who could lift the bow would be chosen as the groom for Sita. Ram lifted and broke the bow and married Sita. Similarly, Raja Balavarman of Pragjyotishpur had a parasol (umbrella) received by Narakasur from Varun Dev, the Rain-God. This parasol cast its shadow on only a supreme king. Amritaprabha met one prince after another in the assembly along with her maidens, with one of them holding the parasol, the precious possession. The parasol did not cast its shadow on any other prince except on  Meghavahana. Though Meghavahana did not have a kingdom then, the casting of the shadow of the umbrella on him proved he would be a prominent king in the near future. Amritaprabha chose Meghavahana as her husband and the wedding took place with great pomp and show in Pragjyotishpur. Raja Balavarman gifted the parasol to Meghavahana.

To quote from Studies in the History of Assam by Suryya Kumar Bhuyan, “There was a wonder-working article in possession of the royal family descended from Bhagadatta,—the parasol or umbrella wrested by King Narakasura from the rain-god Varuna. The parasol emitted a cool shade when it was held over the head of a person endowed with the marks of a potential sovereign: this miraculous effect was not produced when it was spread over the heads of others. This parasol was used in the Swayamvara ceremony of Amritaprabha. It can be assumed that in the congregation of kings and princes the umbrella-bearer held the parasol over the head of one candidate after another as he was approached by Princess Amritaprabha, garland in hand and accompanied by her friends and attendants. When it was held on the head of Prince Meghavahana the cool shade emanating from the parasol enveloped that prince. From this the princess came to know that Meghavahana would one day become a great king— a Rajadhiraja Chakravarti-raja. Amritaprabha then placed the bridal garland on the neck of Meghavahana. It was soon followed by the celebration of the festivities of their marriage”: 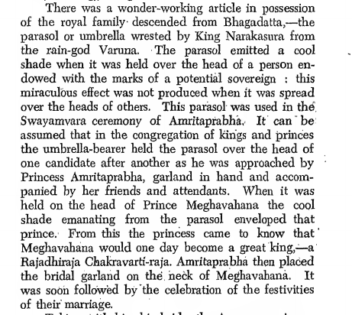 To quote from the Rajatarangini by Kalhana, translated by Jogesh Chunder Dutt, “This exiled prince had a son named Meghavahana, whom his father sent to the country of East Yotisha to be present at the Sayamvara marriage of the daughter of its king who was a Visnuvite and ho had the fortune of being selected as the husband of the princess. He was also presented with an umbrella, which was got from Varuna by king Naraka and which cast its shade on none but a paramount king. This connection gave him some importance in the eyes of the people who believed that he would one day rise to power.”:

Meghavahana and Amritaprabha came to Gandhara after the wedding ceremony. Meanwhile, after 47 years of rule, Raja Sandhimati of Kashmir resigned from his throne, leaving the affairs of the kingdom to his ministers. Despite request from the ministers to reascend the throne, he refused and left the kingdom as a hermit towards the Himalayas. The ministers came to know about  Meghavahana as a descendant of the Gonanda dynasty and about his marriage with the princess of Pragjyotishpur. They came to Gandhara to take them to Kashmir. What Gopaditya planned of regaining his ancestral kingdom through war, happened amicably. They all went back to Kashmir. Meghavahana was crowned the king.

Meghavahana ruled from 80-46 BCE. He was 80th ruler of the Gonanda line of rulers and the first king of the restored dynasty. Going by several records, Meghavahana ruled before the start of the common era, i.e. last years of BCE. According to the book  Introduction to Assam by Dimbeshwar Neog, Meghavahana ruled from 12 CE. He cites Oralstyne, the translator of Rajatarangini in English. Here is an extract from the book: 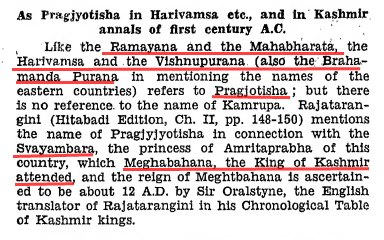 As soon as Meghavahana ascended the throne of Kashmir, he promulgated an edict that prohibited slaughter of animals in his kingdom. He arranged donation of money to hunters and sellers of meat so that their livelihood wasn’t affected due to the ban.  He built a village named Meghavana and ‘peopled it with Brahmanas’. He set up a monastery called Meghamatha. To prevent other kingdoms to stop slaughter of animals, he visited the respective kings and involved in battles with those who did not comply with. He even went to Lanka where he was given a warm welcome and his cause supported. Meghavahana expanded the boundaries of his kingdom and ruled his kingdom wisely.

Amritaprabha constructed a Vihara called Amritabhavan for foreign bhikshus. Staupa, a learned saint from Tibet, was a courtier in the court of Raja Balavarman. Amritaprabha invited Staupa to Kashmir forever to which her father agreed. Staupa built a Buddhist stupa in Kashmir known as Lo-Staunpa.

2. Introduction to Assam by Dimbeshwar Neog.

3. Studies in the History of Assam by Suryya Kumar Bhuyan.