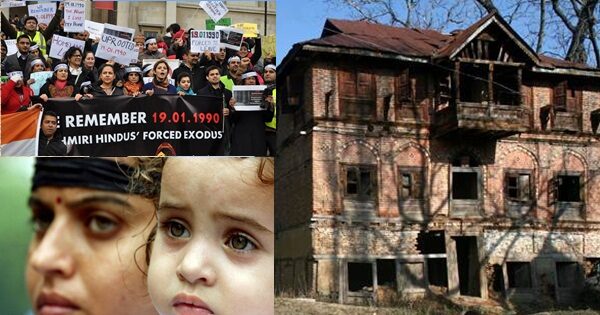 A young scholar, a Kashmiri Pandit once told me about this conversation he had in a conference on social justice and while being out of the country. There were several Kashmiri Muslims who were in the conference and before he was to present his paper, one of them came up to him. After greeting with a warm smile asked him in which year was he born. Puzzled by the question as to why in a conference on social justice where he was making a presentation, they wanted to know when he was born. He still told them, a little baffled.

It was after he came back and described this to his father that he explained why they had asked him so. “They didn’t want to know your age. They wanted to know whether you were born before 1990 or not. That was the intention.”

“What difference does it make and why would they ask me before my presentation?”

“If you the pre 1990 generation, you become a witness to what had happened to us. They did so because they wanted to find out if you would talk of the holocaust and if you did so as a witness, how to counter your arguments.”

Since he wasn’t of the pre 1989 generation, they had felt relieved and gone.

“What if I was not and belonged to the earlier generation had come and talked about it?” he asked.

“These men had come ready for such an eventuality,” his father had answered, “and perhaps do at every forum where they feel such a possibility exists. Then they would have done something to discredit you, prove you wrong.”

The story is chilling and eerie in that it tells us of the attempt by a people, their supporters writers and historians included, institutions to hide and whitewash their crime year after year at every possible opportunity, whether at local or international forums and where they feel they have to hide it from the eyes of the world. This event bears a resemblance by groups, societies and individuals that want to hide, who have murder of innocent persons on their hands and are trying to cover it up from the glare of the world.

This is something that the perpetrators of Kashmiri Pandits have tried to do in the last century, more so in the last thirty years and the most after the abrogation of the Article 370 and the increase of transparency in a place marked by distrust.

There is something else that one may notice about the above generation. It tells us that there was a civilization that for centuries tried to save and preserve its identity from extermination and lived in silence because it found the world silent to their call for help. Once we look at that, the issue seems to give us a deeper understanding of what it has meant to be a Hindu, to belong to the era where he was an infidel and had to face either genocidal extinction or run away to preserve his faith.

“Being a German in my generation,” once said the prize winning author, Carolin Emcke, “means to distrust myself.” What she meant was the shadow of the holocaust is so long that it hangs over every society for generations and one that forever tries to come to terms with its past and the exterminations of its own people. That perhaps is what can be said to be true of Kashmir, the Kashmiri people adding that the shadow of the holocaust in this case is a very long one, over five hundred years, one that has terrorized generations all along leaving them to forever wanting to adapt and survive. It makes little difference that it happened in phases, sometimes almost slow and unseen while at other times systematically decimating everyone and every symbol of anything that came in the path of the domination of one faith, exterminating everyone who tried to resist it over seven exoduses.

Exact dates are important in genocide and central to its occurrence. It is forgotten by the perpetrators but remembered by the survivors. The survivors talk of it in a chilling way remembering about the exact time, place and the persons who were the perpetrators of the crime. Apart from that, the talk of the survivor is a banal one, the survival being a task of being alive in midst of indifference and terror to preserve the fragmented self, an attempt by the psyche to preserve its fragility in the midst of alienation.

For Kashmiri Pandits born before 19th January 1990, dates are extremely important. If one was born before that time and was seven, one heard and remembered the slogan ‘raliv, chaliv ya galiv’ (convert, runaway or die) coming from the mosques all over Kashmir for you because you were a Hindu. If one was older than that, one heard that it is the women, including your little sister who your neighbors wanted you to leave behind in order to create an Islamic Kashmir. If you were older than that, you perhaps wondered why India and the rest of world remained silent and understood that Kashmiri Hindus had no one to speak for them. Silence too long has been known as the language of trauma and genocide its expression.

Last year while traveling in USA on a book promotion, an octogenarian Kashmiri lady on hearing I am an author had called me aside and told me in one breath all the events in her life from the time of partition to the present in the minutest detail. “I don’t want them to be forgotten.” The earliest included when she was a teen and was given a small packet containing poison if she was picked up by Pakistani raiders (Kabali) and the one in 1990 when she had passed on the same to her granddaughter telling her the same. “The women of our community preserved it and kept it ready, perhaps over centuries. Every mother taught it to her daughter and asked her to pass it on with time. Maybe it will stop now as there is no Hindu left in Kashmir valley anymore,” she had commented and said, “I hope this episode will not be forgotten.”

The survivors of the Kashmiri Hindu genocide remained silent because of shame, the shame of rape, not able to protect one’s land. Did the perpetrators in this case, the Kashmiri Muslims remain silent due to guilt? Hardly so but a few do, a miniscule percentage do. “If we acknowledge the enormity of what our fathers and forefathers did, we will have to radically change our identity of who we are and what we have believed in and I don’t think I have the courage to do so,” was a rare voice who told me once when I asked him why they don’t take any accountability for the crime they committed on 19th January 1990. “Maybe we are leaving to the next generation.”

Bruno Bettelheim once famously said, “What cannot be talked about can also not be put to rest and if it is not, the wounds continue to fester from generation to generation.”

So, which will be the generation that will break the silence of the holocaust that took place in Kashmir? Is it the fear that if acknowledged it will lead to the acknowledgment of all other genocides that have taken place on the Indian soil? “Will it not lead to more bigotry and violence than what has already taken place?” ask its critiques. The answer to that is what Martin Luther King famously said, “True peace is not merely absence of tension; it is the presence of justice,” and, “Injustice anywhere is a threat to justice everywhere…”

The Indian response of silence to the Kashmiri Hindu genocide was born to its own response to history of persecution that we as a nation don’t acknowledge and haven’t come to terms with. Till we do that more Kashmirs will happen and we will wonder why all this doesn’t move us and make us rise up and protest against this assault on our identity.

Sometime ago I was talking to a Jewish psychologist and she asked me in my opinion which is the safest country for Jews in the world today. When I mentioned Israel, she smiled and said, “No, I and many others believe it is Germany.” Seeing my puzzled face she said, “It is because of the decades of German people working off the past. They introspected, searched for and finally found the evil within themselves that lurks within all of us and rarely under control. Only those who acknowledge it and don’t deny it can ever say that they will protect others against genocide.”

The history of India is beset with mass atrocities and genocidal violence. We need to begin with Kashmir and that perhaps will lead us to come to terms with our past so that we can leave a safer world for our children. I hope that beginning happens sooner than later and happens now.

This article on the Kashmiri Hindu genocide was first published at rajatmitra.co.in.