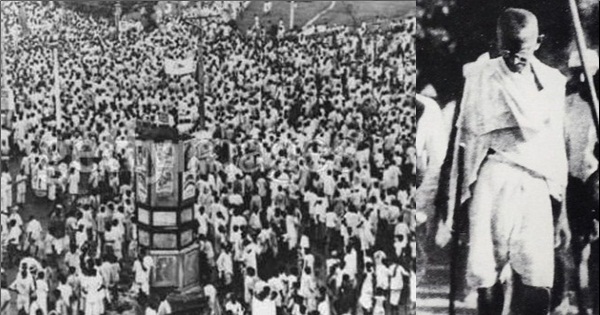 2019 is the 100th Anniversary year of “The Aafat Called Khilafat movement”. Readers might be surprised by the word ‘Aafat’ which means calamity of a menace to the Country. Post World War 1, Turkey known as Ottoman Empire, was partitioned. The Sultan was reduced to a figurehead who ruled the nation in the name of Allied powers. The hugely agitated Indian Muslims like Muhammad Ali, Shaukat Ali started a movement named as Khilafat movement. They considered Turkey as center of Islamic Khilafat of the World. For them any rule on Turkey would offence Muslims of the World.

Mahatma Gandhi supported Khilafat Movement, a purely Muslim movement thinking that this would win him support of Muslims for the Indian Freedom struggle. It was like tagging of Indian freedom struggle with a distant land issue that has no relations with India.

Dr. Ambedkar mentions, “It was taken up by Mr. Gandhi with a tenacity and faith which must have surprised many Mohommedans themselves.” Just opposite Turks they wanted to convert to a republic. Ambedkar said that since beginning the first motive of Muslims who supported Non-cooperation movement started by Congress under Gandhi was Khilafat and not Swarajya. Gandhi even threatened the British Government of returning his medals if Non-cooperation and Khilafat movement were not heard properly. Surprisingly neither the Muslims of Turkey nor the Muslims of World were unperturbed by the Dissolution of the caliphate.

Historian R C Majumdar, Annie Besant, Lala Lajpat Rai and other viewed that Mahatma Gandhi in order to attain support of Muslims joined a religious movement of a separate nation with the Indian Freedom struggle which was a Political movement. According to Lala Lajpat Rai, this step strengthened the sectarianism and narrow minded bigotry of Indian Muslims. Hindus proposed a complete ban on Cow slaughter from fellow Muslims for supporting Khilafat, an Islamic movement. Gandhi rejected the proposal and asked Hindus for unconditional assistance.

Leaders like Chittranjan Das opposed Khilafat Movement thinking that mobilized Muslims might invite the Afghans to invade India, in which case the country might be subjugated to Muslim Raj from British Raj. He wrote to Lala Lajpat Rai that he did not fear the seven crore Muslims of India, but the seven crore of Hindustan, plus the armed hordes of Afghanistan, Central Asia, Arabia, Mesopotamia and Turkey would be irresistible and posed a grave National threat to India.

On appeal of Maulana Abdul Bari 18000 Indian Muslims sold their properties in India to move to Muslim Land or Dar-ul-Islam of Afghanistan. Gandhi instead of opposing said that the fight of Muslims is growing space. No doubt the seeds of Pakistan was sown three decade before it actually materialized.

The enthusiasm of Ali Brothers supported by Gandhi soon started showing its side effects. In Kolkata Congress session in 1920 Shaukat Ali said to his fellow Muslim brother: ‘Mahatma Gandhi is a shrewd Bania. You do not understand his real object. By putting you under discipline, he is preparing you for guerrilla warfare. He is not such an out and out non violencist as you all suppose. ’

In Nagpur session Maulanas recited Ayats from Quran that contained frequent references to violent Jihad against kafirs. Swami Shraddhananda brought this matter to Gandhi’s notice. He smiled and said that they were alluding to the British Bureaucracy. In reply Swami Ji told him that ‘it was all subversive of the idea of non-violence and when a revulsion of feeling came, the Muslim Maulanas would not refrain from using these verses against the Hindus.

Gandhi ji never listened to any advice and blindly supported Muslims by warning Hindus that if they did not help the Muslims in their time of trouble, their own slavery was a certainty. Muslims, now united and centralized, started growing impatient and aggressive on Non-cooperation and Khilafat. In spite of Gandhi’s reassurance and promise to keep patience they started thinking the other way. A telegram to Amir of Afghanistan as an invitation to invade India was intercepted by government. It was written none other than Muhammad Ali. Ali brothers tried to play this plot down by issuing an apology but Clerics issued fatwas against British administration thus proving Muslims to act against government.

The protests started turning violent. Mob looting, rioting, killing that started from Mumbai in November, 1921 soon spread to all parts of country. The honeymoon of Hindu Muslim unity in the name of Khilafat Movement was over. Gandhi did a blunder mistake of tagging a religious Islamic movement with Indian political movement. The frustrated, organized, radicalized Muslims in mobs started attacking government properties and soon turned mercilessly to peaceful Hindus. Hindu properties were burned and looted, abduction and rape became common song, cow killing and temple desecration became a habit.  Starting from Moplah in Kerala to Multan, Panipat, Rawalpindi, Delhi, Kanpur, Kohat, and Multan the story was same everywhere.

There is a list of hundreds of riots in the decade of 1920s. The wounded Hindu who once considered Gandhi as a champion for independence got the first taste of his blunder mistake. And the biggest point to ponder is that this blunder by Gandhi resulted in partition of the Country in 1947. Thus the term coined by veer Savarkar “Aafat called Khilafat” is appropriate and rightful.

Key Source: Savarkar: Echoes from a Forgotten Past by Vikram Sampath.