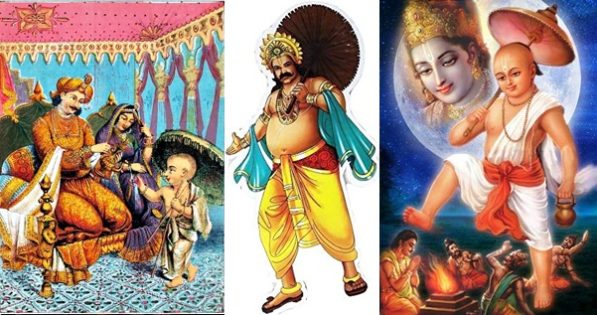 Kerala Minister Thomas Isaac’s abuse of Vamana sums up the drastic cultural change that happened in the last 40 years in Kerala.

Soon a nun who is a school head-mistress makes an insulting lecture abusing Vamana in her speech for students. A moulavi in Kerala said Mammad Ali became Mammali, Maveli and finally Mahabali. Kerala MP Hibi Eden joins the chorus in abusing Vamana and defining Onam as a ‘secular’ festival exclusive to Kerala, open for all religions in Kerala, but where anybody outside Kerala has no say! No doubt, this is a well planned out strategy to distort and destroy the essence of a diversity-respecting Dharmic narrative that is free of dualities, to appropriate them into the Abrahamic / Communist binaries of good and evil, the oppressed and oppressor.

The Daitya king Mahabali has a presence and a positive image throughout Bharatavarsha and he is not restricted to Kerala. Bali Pratipada (also called as Bali Padyami, Padva, Virapratipada or Dyutapratipada) is celebrated in Gujarat, Maharashtra and Karnataka on the 4th day of Deepavali to honor the return of Bali to see his people, like in the case of Onam which is celebrated primarily in Kerala and also in Tamilnadu (which has heritage towns like Mahabalipuram). The ancient Anga, Vanga, Kalinga, Pundra and Suhma kingdoms of Bihar, West Bengal and Bangladesh were founded by the descendants of Bali as per Mahabharata.

In my childhood days, Onam was all about both Mahabali and Vamana. Thiruvona Nakshatra (Sraavana) was celebrated as the Janma Nakshatra of Vamana (Vamana Jayanti). Every home had Trikkakkarayappan who is a form (bhaava) of Vishnu, worshipped in the form of Vamana. Pookkalam (floral patterns) and Kolam (rice-flour patterns) were made to worship Vamana in the form of Trikkakkarayappan (long pyramids made of clay). Maaveli (Mahabali) was the honourable guest who will be visiting his people on the day of Thiruvonam when this Vamana Jayanti is celebrated.

Slowly the narrative of Mahabali as the oppressed victim and Vamana as an aggressor (who is in fact a small boy!!) was spread, in the typical Communist binary of the oppressed and the oppressor and in the Abrahamic monotheistic framework of good and evil ! This happened in the first 20 years, in the 1980s and 1990s.

Then in the next decade, the worship of Trikkakkarayappan was slowly discouraged. Communists started creating Pookkalam, showing their party symbols of sickle and hammer which was nauseating and made no sense at all. Onam was celebrated as a day when Malayalis spent for drinking alcohol and non veg food was hugely promoted, except beef. (Though non veg in limited quantities was prepared by some sections of Keralites during Onam days, it was never the de facto food item for the festival.) 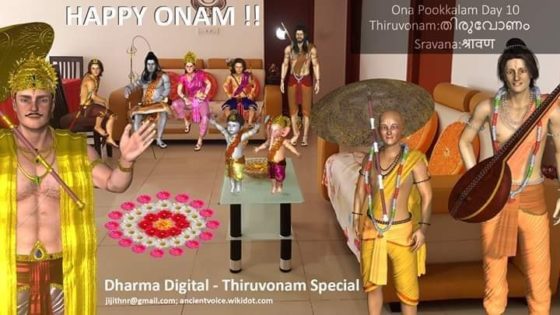 From 2010 onwards it became more bizarre and this year we witnessed the Communists creating the repulsive Pookkalam of Che-Guvere, looking like vomit. They also openly promoted the sale of beef for the Onam days. The news of throwing away, desecrating and demolishing Trikkakkarayappan also was reported. Then this minister Tomas Isaac himself abused Vamana in his tweets.

What happened to Mahabali appears unfortunate if we don’t care to look into the details. This is the loophole that the Communists and Abrahamic narrative-makers are exploiting for their hidden agendas.

The problem is in their perspective. If we look closely, the whole narrative is saying that Mahabali got a better position and recognition than the jealous Indra. Vishnu recognized the Adharma in the jealousy of his brother Indra, so in the pretext of helping Indra, Vishnu in the form of Vamana increased the fame of Mahabali, a thousand fold. The balance of Dharma is thus restored while both Indra and Mahabali like the final outcome.

Besides, our ancient texts didn’t try to hide anything and thus caution again and again about our urge to classify everyone into the binary of good and bad. There was a little ego in the mind of Mahabali that he is rich and the ruler of an empire. Similarly there was jealousy in the mind of Indra because Mahabali was better than him. The Puranas did not hide both these aspects but vividly details this out for us to learn. No doubt, the jealousy of Indra would be increasing due to the further elevation of Mahabali’s status and the only escape for Indra will be to give up his jealousy and become friends with Mahabali, which was what happened ultimately.

Those who try to turn Mahabali into a ‘Dravidian’ or ‘Dalit’ hero should note that the only source about Mahabali and Vamana are Veda, Itihasa, Puranas in Samskrtam and they were faithful in reporting the narrative from the side of Mahabhali and from the side of Indra. If Mahabali had a Dravidian / Dalit identity we would have found his mention independently in the non-Samskrta languages like the Munda, Santali or Tamil languages. But there is nothing original or different about Mahabali, (or even about Mahishasaura, Hiranyakashipu, Hiranyaksha, Ravana, Sishupala or Duryodhana) in the ‘Dravidian’ or ‘Austro-Asiatic languages like Munda or Santali which is not copied from Samskrtam. All the narratives about them in favor of them or against them only comes from Samskrtam.

The three strides of Vishnu, hailed as tri-vikrama, is the oldest, attested in Rgveda (1st Mandala, hymn 154):

Shatapatha Brahmana, Mahabharata with Hari-vamsha, Ramayana, Vishnu Purana are some of the oldest texts referring partially to the account of Bali and Vamana in few verses. It is also mentioned in Vamana Purana, Garuda Purana, and other Puranas. The narrative is well detailed into several adhyayas in Srimad Bhagavata. The 8th Kanda of Bhagavata details the narrative of Vamana and Mahabali. The 22nd Adhyaya of 8th Kanda of Bhagavata will dispel all the misconceptions of the Communists and Abrahamists regarding Mahabali and Vamana:

Mahabali says, I will strive to make my futile promise true (rtam). Please, therefore, place your third footstep on my head.

Summarizing the long passage, Mahabali then gives all his possessions to Vishnu in Vamana form and becomes free and light. The material possessions were binding him (rather than the more apparent Naga pasha of Garuda which bound him in the sight of his people). These material possessions were preventing his ascend into higher consciousness, like achieved by his grandfather Prahlada who then arrived at that spot. Bali’s surrender of his empire and possessions to Vishnu will be understandable if one remembers the surrender of the Tiruvitamkoor kingdom by the Kerala royal family at the lotus feet of Sri Padmanabha. Vishnu needs nothing as the entire Universe is his creation.

Vishnu in Vamana form then tells this to Mahabali after he becomes sinless and free of all possessions: bhavitendro mad-aashrayah – Become Indra by my support. In his entire life, Mahabali was striving to become Indra. After cleansing Mahabali, Vishnu offers the same materialistic success to Mahabali, which he always coveted! This time Mahabali is but equi-poised about becoming Indra, because he now has an elevated consciousness.

The Communists and Abrahamists are thinking like Mahabali’s guru Bhargava Sukracharya who at that time was giving advice entrenched in materialism and material possessions (viz. not to entertain Vamana, because he is Vishnu and has come to take away his material wealth including his empire). In a materialistic view Mahabali lost everything and Vamana cheated him (like Thomas, Hibi and the nun are thinking). But in a Dharmic view Mahabali gained everything and lost all those that are to be given up for ascending in the Dharmic consciousness.

Another important factor to note is that Mahabali’s lineage clearly makes him the cousin of the Aditya Devatas. Aditi, Diti, Danu, Kadru, Vinata and others – all of them were sisters and heads of ancient matriarchal families. Indra and Vishnu are Aditi’s sons. In Diti’s son Hiranyakashipu’s lineage are born Prahlada, his son Virochana and his son Mahabali in three successive generations. In other words Indra, Vishnu and Mahabali all are related and cousins. Indra’s descendants all assume the title of Indra. The title of Indra is also earned by many like Shivi, Nahusha and Mahabali himself. During the time of Kashyapa or Pulastya the concept of four Varna was not prevalent and so I don’t use the argument that Mahabali or Ravana are Brahmanas. But they were the descendants of Brahma-jnaani sages like Kashyapa and Pulastya. Brahma-jnaanis are the true Brahmanas by Guna-Karmas, not by birth. In other words, all of them are the children of Samskrti.