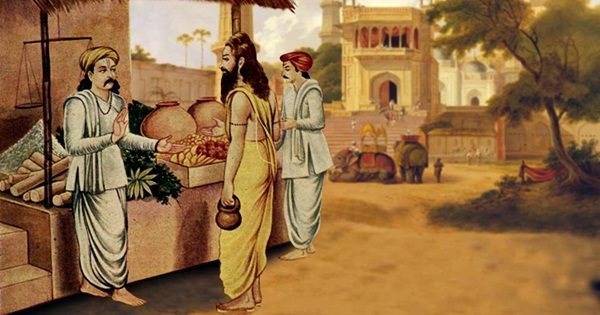 What is the first thing that comes into your mind when you think of businessmen? Chances are that you would have thought of a scheming person who

– is just waiting to make more and more profits
– is hell bent on exploiting people and resources
– thinks only of money all the time
– is a total miser.

If nothing else, at least COVID should have made one think twice about whether the above points are true. In Bharat, the Varna of the person who indulges in business, enterprise, trading, and other commercial activities was “Vaishya” varna. As per the narratives set by the Britishers, Leftists and Distorians, this was the third ‘caste’ in the Sanatan Dharma and they were much below the Brahmins and the Kshatriyas.

Did you know that the Vaishyas paid taxes to the ruling government to the tune of 1/6th of their income? Did you also know that they were the ones who gave donations and charity for all causes? They were also the ones who gave funds for building temples, choultries, goushalas and dharmshalas. It was their duty to call Rishis and Brahmins and have big Yagyas and Pujas for the welfare of the village and the region, not to mention the entire Lokah.

Vaishyas also sponsored the Gurukuls and Brahmacharis whenever they were in need of funds. If all this was not enough, they were the first ones who were approached by the King of the land, if there was a war, drought or famine in the land. And the Vaishyas did this willingly and in the interest of society because they knew that a healthy society meant a prosperous society.

One of the rules our ancient culture followed was that the best produce was to be used by our own people first and that which was in excess could be sold to other lands. Another rule was that resources which were renewable were to be used maximum and those which were exhaustible could be used only to a minimum because they were the wealth that one left behind for future generations. Our ancient businessmen (the Vaishya Varna) never broke this rule for unjustly earning more and to hoard more for their own clan. If ever anyone did so, they were punished severely.

Even today, in times when Capitalism is at its peak, when exploitation of people and resources are the norm, when hoarding only for self seems to be motto of every businessman, the business class of Bharat seem to go against this again and again. I am definitely not saying that all Bharatiya businessmen are only Sattvik and pure. But I am proud of the fact that during this COVID 19 pandemic, they have at an individual level opened their purse-strings to feed people and animals alike. They have also at a social level donated to the fund created by the Hon. Prime Minister. And they have also kept aside the motive of “Profit only” and have worked to create products which are necessary to tackle this epidemic, like sanitizers, face masks, PPE kits, ventilators, etc. all at a reasonable cost.

The cost factor was one of the most important things because while it is easy to profit from the illness of many, it takes a good heart to disregard profit and work for welfare. Look at our pharmaceuticals which are now working round the clock to prove the whole world with an adequate amount of hydrochloroquine tablets, at reasonable rates and the best quality possible.

Even small traders and retail shop owners are working in the best possible manner to see to it that the people of this land do not go without supplies and that too at reasonable rates. Traditional business models and families are one of the reasons why unlike other countries, Bharat will not have a negative GDP even after the ravaging of the Chinese virus on the entire world’s businesses.

Be proud of your roots, have faith in our ancient traditions. Do not fall for any narratives and insult any class or caste.

Rati Hegde is a columnist for Organiser Magazine, indusscrolls.in, etc. on politics, current affairs and other topics. She blogs at 'Stories of Bharat' page on Facebook.