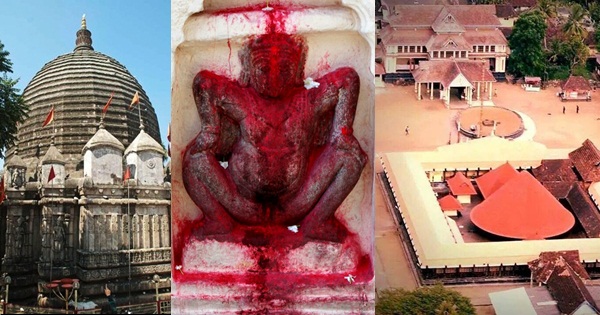 From Sabarimala in Kerala if one travels westward along the Pampa river for 85 kms one reaches a famous Temple of Mahadeva in Chengannur. It is also called Bhagavathy Temple.

There is a very interesting legend attached to this temple. When Lord Shiva was getting married to Parvati in Kailasa Parvata in the northern tip of Himalaya, all the Devatas, Rishis went to attend the ceremony. Agastya Rishi had to stay back in the southern most part to maintain the balance of the Loka. Though the sage was not happy to miss the great celebration, he was assured by Lord Shiva that he himself would come down south to meet the sage along with his newly wed consort Parvati. The wedding in Kailasa Parvata got over and as promised the newly married couple came down south to receive the blessings of Sage Agastya.

On arrival at the hermitage, Parvati’s menstruation cycle commences. Lord Shiva meets Agastya muni and informs that they would come together after four days since Parvati had started her menstruation cycle. Agastya Muni said it was alright but he considered the place where Parvati stayed for those three days as holy. 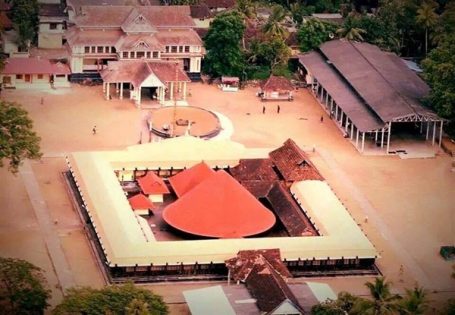 On the fourth day Parvati was taken on an elephant to the river in a procession for a ceremonial bath by all the ladies of the ashram. Sumangalis smear her body with turmeric and sandal oil, bathe her in the river, decorate her with flowers and unite her with the patiently waiting Lord Shiva and now together they go to seek the blessings of Agastya Rishi. 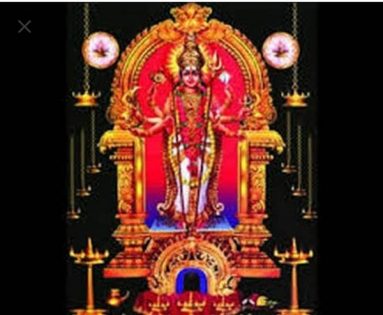 From then onwards the river where she bathed was named “Pampa River” in honour of menstruating Parvati. Entire southern region was entrusted to Parvati for the welfare of her women devotees.

There is another legend of the menstruating Goddess connected with Kamakhya temple. Nestled in the picturesque Nilanchal Hill in Guwahati, Assam, is the ancient temple Temple of Kamakhya Devi. It is estimated the original temple is around 5000 years old, although it has been the target of Muslim invaders repeatedly and has been reconstructed as many times. 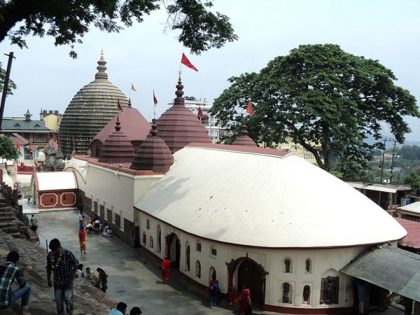 The uniqueness of Kamakhya Devi temple lies in a very interesting legend attached to it. The deity worshipped here is a menstruating Goddess Kamakhya. In the Garbhagriha or the sanctum sanctorum, the stone from both sides sink downwards about 10 inches in all, giving the impression of the yoni of Goddess Sati. A natural fresh water spring keeps this sunken depression moist at all times. This vulva shaped sunken depression is worshipped as Kamakhya Devi. The water which trickles down is considered and revered as holy theerth.

In the previous post, I had mentioned about menstruating deity, Parvati being worshipped in Mahadeva temple in Chengannur, Kerala. There are many such temples in Andhra Pradesh, Tamilnadu and the rest of the country but the Kamakhya temple of Guwahati is considered Mother of all menstruating Goddesses.

The legend of Kamakhya Devi temple is very interesting. Many Manvantaras ago, King Daksha and his Queen Prasuti meditated to Goddess Adi Parashakti for a daughter to be bestowed to them. After a long penance, Adi Parashakti made an appearance and granted them their wish. In fact on the orders from Lord Brahma, Adi Parashakti herself took the earthly form of king Daksha’s daughter Sati, also called Dakshayani.

Sati grew up listening to the tales of Lord Shiva and yearned to be his consort. When she attained marriageable age, King Daksha started looking for a suitable groom. Princess Sati earnestly asked her father to stop the search and went into the jungles to meditate and worship so that she could marry her Aradhya daiva, Lord Shiva. 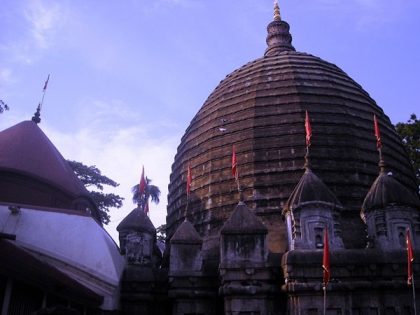 Meanwhile Brahma, Saraswati, Vishnu and Lakshmi went to Shiva and implored him to take Sati as his wife. Lord Shiva laid down 4 conditions for the wedding. First, his consort should be the yogini to the yogi that he was. Second she should be a passionate wife when he is a grihasta. Third, she should not distract him, when he is absorbed in his meditation. Finally she should never doubt him at any instance. He then went to the place where Sati was meditating. There Shiva appeared as Rudra, his most magnificent form in front of her and granted her wish and also explained his conditions to her. Sati agreed to his conditions.

Daksha albeit reluctantly gave his daughter Sati away to Shiva in marriage with Brahma performing the wedding rituals and the wedding vows. King Daksha decided to do a yagna. When Daksha entered the yagyashala with his queen everyone rose up to greet the king, except Shiva and Sati as it would be improper for someone in higher venerable status to stand up and greet the King. Daksha became very angry and banished everyone out. Sati left with her husband without a word.

A few months later, Daksha organized another yagna and this time he did not invite Shiva and Sati. Sati came to know about it through another relative and implored Shiva to go with her. Shiva declined saying that one should not go uninvited to a yagna. Shiva told Sati to attend her father’s yagna if she wanted to, but that he would not attend it. Sati reached her father’s place but Daksha insulted her and Shiva. This enraged Sati so much that she jumped into the yagna kund and died saying she would be Shiva’s consort again on her rebirth. 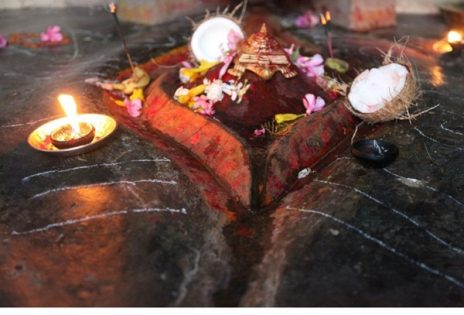 Shiva on hearing this gets into a fit of rage and started dancing the Tandava with dead Sati on his shoulders. The intensity of this cosmic dance shook up the three Lokas. Vishnu threw his sudarshan chakra in such a way that it cut up Sati’s body into many pieces which started falling off Shiva’s shoulder. When all parts of Sati’s body had fallen off the shoulder, Shiva stopped the Tandav, thus saving the world. These pieces of body that fell in different places are called the Shakti Peethas. There are 51 in all.

Kamakhya Devi temple is one such Peeth where the yoni of Goddess Sati is said to have fallen. So Adi-Parashakti is prayed to in the form of a bleeding yoni in the Kamakhya Devi. Every year in Ashada month, it is believed that Kamakhya menstruates for three days. The temple is closed for these three days. A special puja called the Ambubachi Puja is held when the temple reopens. It is said that river Brahmaputra turns red during this period. Brahmaputra does take on a hue of muddy red, this could be due to the start of monsoon season which makes the waters of Brahmaputra gush down and also the blood red colour of the soil which mingles with the river water.

Another unique aspect of this temple is the prasad that is distributed during Ambubachi Mela. It is red coloured rock crystals called Kamakhya Sindoor. It is considered to be very powerful. It is powdered and used by the devotees. Kalika Purana also makes a mention of Kamakhya Sindoor. This is supposed to be the crystallized menstrual blood of Devi Kamakhya. 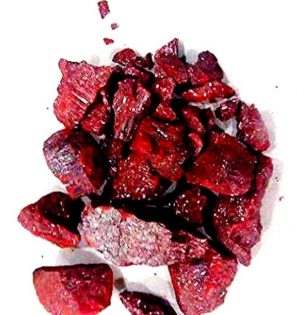 Menstruation is the sign of a woman’s originality and supremacy. The holy being and temple of Kamakhya rejoice this ‘shakti’ inside every woman.

Is there too much of menstruation reference? It would probably feel so to the English literate minds. The word ‘Periods’ is English and Christian which is alien to our culture.

With inputs from Gangotry Goswami and Hens Saran on Kamakhya Devi temple.