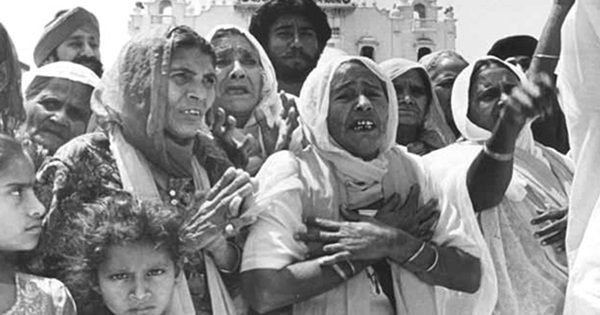 Will the sentencing to death of two people in the 1984 riots create a closure for a wound that hasn’t healed for our nation?

Justice begets answers and we need one for the events that took place thirty five years ago.

The historical bond between Hindus and Sikhs has been one of the deepest defining characteristic of Indian history and Indian consciousness. Did the Congress destroy that through its organized violence on the Sikhs carrying out under the policy of divide and rule?

The time was 1993, December. I had joined the Tihar prisons on the invitation of Dr. Kiran Bedi, who had taken over as the IG prisons. She had asked me if I could work in the jail number four, the largest and the most notorious of all the jails.

Dr. Bedi who had heard about my work with grief and memory asked me if I could start a rage reduction program amongst the violent prisoners. “A number of them come and tell me, ‘Gussa control nahi hota’. They suffer from violent nightmares and get into violent behavior that becomes uncontrollable. They also say that the meditation program brings up memories that they can’t handle.”

Rage reduction exercises are based upon principles that we store and push our memories deep inside and under therapy can bring it out. The rage we store inside is disturbing but also can be confusing and scary. Contrary to what many people think, many a violent offender are looking for help in order to find inner peace.

I was assigned a group of twenty five inmates, a small group by prison standards. I had asked for a small group that will have a greater chance of showing positive results and could spread it in the jail. Grief work is an intense, group process that required the prisoners to form a bond with each other and let go of their rage. Our group had terrorists, mass murderers and severely violent offenders. They came from semi urban backgrounds. It was coordinated by Jathedar, the head munshi and a terror inside the jail. When I would stop, he would say, ‘hun jail di bhasha which mein samjhawanga’ (now I will explain in the language of the jail).

Little did we know that what we were going to learn in that group would forever change the way our understanding of the social and the political perspective in India and why it cannot be separated.

I would give a lecture on the grieving process and how we store rage inside ourselves. Picking up example from their daily lives, I would share how some of them may be indoctrinated in violence and it was not something they were born with, that violence is a learnt behavior. I talked about the concept of how individuals are scripted into violence and at a later date it makes some of them turn into severely violent offenders. I explained how early childhood experiences shape our personalities, particularly the way we express difficult emotions. I could see a number of them nod their head.

After the sixth lecture, Jathedar came to me after the lecture. “Surjit (name changed), one of the member of the group wants to talk to you,” he said. “Be careful. He is a very violent man.”

“I have a question for you,” Surjit said as we sat down to talk. “I want to tell you a story.” He began, “I talked to my phattewars, they told me I should talk to you.”

“I was ten and our family used to live in east Delhi. 31st October 1984 will forever stay etched in my memory. When I came back from school I felt something was wrong. People were running away in panic helter skelter in all directions. There was black smoke everywhere and a pungent smell of burning tyres.”

“My mother quickly took my hand and told me to follow her and the other women towards the school. ‘Take your sister along with you and don’t leave her hand,’ she ordered. We all ran to the local school and saw the gate being shut behind us. There were at least a few hundred families there. Some young men from our community guarded the gates. Where is my father I kept on asking. She didn’t tell me. No one else did. Everyone was busy talking to each other or listening to radio. No one seemed to bother about us the children. Fear was written large on everyone’s face.”

“Till late at night we felt that the attacking mobs tried to enter the school. There was only smoke that rose higher and higher in the sky. There were loud noises everywhere of people screaming and shouting from outside. Inside every one kept looking at the watch .Around midnight, I saw Pammi chacha, our neighbor who used to work in the same factory as my father. My mother was alternately bringing her shaking hand to her forehead and asking him what happened. I heard Pammi chacha say, his face ashen and pallid, ‘jala ditta, sab aadmi nooh jala ditta’.”

“Hearing this, my mother and the other women around her threw themselves on the ground and started beating their chests and then rolled on the floor. It suddenly seemed to me something terrible had happened as everyone started to wail. My sister and some children began to wail too. Everyone was crying. Someone told me, ‘Bitoo, tere papa nahi rahe. Ona noo jala ditta’. He was naming a local politician of our area.”

“And then I understood. My father had been burnt alive. I had held back my tears but then started to cry. It was a room full of wailing people and then she noticed me. She got up and came charging at me in that state. Holding me by the hand she said, ‘Puttar, taunoo rona nahi hai. Taunoo yaad rakhna hai tere baap nooh kisne marya si’.”

“I stopped crying as she started to slap me asking me to stop. I sat motionless the whole night. Later we learnt my father and almost all the Sikhs from our lane were burnt alive by a mob led by the local congress politician. I also got to know the man who had put the tyre around my father’s neck and put it on fire and beaten him to death.”

“I never saw my mother laugh after that day. We put an old picture of papa and two of our uncles who had been killed. When I became eighteen years of age, she told me, ‘taunoo apna wada yaad hai na’.”

“One day, I cornered the man who had beaten my father to death. I beat him and his accomplice to near death.”

“Should you not tell the police?” I had asked.

“No. I will deny if anyone goes and tells them. There is no proof.”

“Are you inside the jail for that case?” I asked.

“Then why did you tell me all this. You said you had a question for me.”

“Yes. My first question to you is if my mother hadn’t slapped and stopped me from crying on that day would I have become a violent man?”

“I have a second question too. Before that day I grew up hearing that Sikhs always protect Hindus because we are brothers but since that day I never heard that again. In our class Sikh and Hindu boys started to sit separately. I felt a shame looking at them and I know all my friends shared it too. There was a look of victory on their faces. Earlier if my Hindu friends had a problem I was told it is my duty to save him. No one said that now. My mother once even told me, ‘Hindua nooh kabhi na bachai’.”

“My revenge is over. Will I stop being a violent man ever?”

“That I believe you can.”

“One last thing. I saw men being butchered in front of me by these men. Our generation was scared. But the generation after me or the one after that will demand revenge.”

“I hear that amongst my friends. My generation had to think of survival. But for the one after us it will be different. When feelings of survival are gone, rage will emerge,” he said before he left.

For the next session Surjit wasn’t there. Not even for the next one. Two weeks later when I went to his ward to enquire, I learnt he had been released from the jail.

A year later, my memory had become faded a little when one day the Superintendent of the prison told me there was a card in my name. It was one of those cards that were sold on footpaths of Delhi. It had the picture of the lotus flower. On the inside was a hand written verse from Guru Granth Sahib. It said,

“And whom shall I hold responsible or condemn when only one God made us all.”

Below it was written ‘Surjit’.

I had shared this incident with a Sikh historian and scholar. He had explained that it was a common practice for Sikh mothers to stop their children from grieving after a massacre and suppress their rage. “It was believed that then they can be indoctrinated and brought up as valiant men. The violence of 1984 will make the Sikh men think in a different way. Contrary to popular belief that the community is scared into submission and won’t raise its head, it has led many Sikhs to feel for the first time being betrayed. They think that those whom they saved historically from atrocities betrayed them and cannot be trusted anymore. I believe that the bond between the two communities may be permanently ruptured.”

“The anti-Sikh riots are different for one more reason. Almost all riots within India were between Hindus and Muslims, two communities who never had a bond in the first place. This is the only instance of mass violence between Sikhs and Hindus where a deeply existing bond was ruptured.

The Sikhs need a healing touch and apology for that mass violence. That may heal them,” he had added.

Sikhs have been the protector of Hindus down the ages. They have not only protected the Hindus against the atrocities during the Mughal period but also during partition when massacres of Hindus reached epidemic proportions at the hands of Muslims. Sikhs are warriors at heart and possess some of the finest values representing courage, valor and compassion. By butchering them as a community mercilessly for a crime after Ms. Gandhi’s assassination, didn’t the Congress create a wound that may never heal? Would a Sikh think of saving a Hindu in the same manner as Guru Teg Bahadur did once or as his ancestors did for Hindus in countless situations? Why did the Congress drive a wedge between the two communities? In their zeal to please their master, did they not destroy one of the historical bonds that protected India?

As time passes by and the generations after Surjit listen to the stories of atrocities that took place on their forefathers, who will be there to heal their pain, that will rise again, for their generation? I hope we find an answer to that pain before it is too late.

Link for author Rajat Mitra’s book ‘The Infidel Next Door’.

Five Ways to Bond Better with Your Sons