Memory, Mimicry, Symbolism and the Evolution of Homo Sapiens 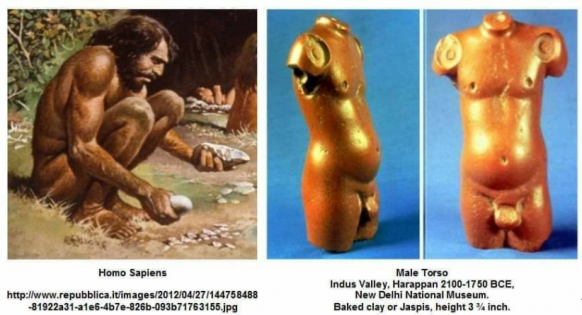 Sanskrit: स्मृति, ‘smriti, ‘memory’*. Memory is the root of everything human. The ‘purposeful use with intent’ of memory, mimicry and the invention of symbolism stood at the beginning of the human species’ evolution to homo sapiens.

The invention of using and employing multiple meanings was the FIRST AND GREATEST evolutionary step forward for humankind.

In the past, when symbols were first invented for writing, people were much closer to the idea of symbols having multiple meanings. Of course! Because that is exactly what symbols are.

It enabled the invention of multiple functions and uses.

A scratch or a combination of them, can be just that, but they can also:

The depiction of an animal on, say IVC seals, is simultaneously:

1. An engraving on steatite, or its stamped offprint into clay,

3. The symbolic meaning of that animal,

What about, say a stone under a Bael tree?

Such a stone is just a stone, the tree is just a tree, its Bael leaves are just leaves, but the stone can simultaneously represent a lingam, as well as represent Shiva. The tree’s leaves can symbolize Shiva’s favorite leaves, while positioning the leaves in a special manner around or atop a lingam stone could stand for a prayer, a wish or a request for a boon.

Of course sounds are just sounds, but:

1. One can copy them (mimicry) for fun, or with a special intent or meaning,

2. Sounds can be a warning, an expression of love, awe, fear, happiness, sadness, etc.,

3. One can link strings of sounds together to make new compound sounds that symbolize things, meanings, actions, etc. (“In the beginning was the word – logos” ~ John 1:1)

5. One can exchange those sound strings to communicate, etc.

All those multiple overlapping meanings are valid and can be understood and meant simultaneously. Again, to see multiple meanings in objects was a giant mental leap forward that started the evolution of the homo sapiens!

It also started, and over time extended, the human ability to think in abstracts. After all, thoughts are the most abstract symbols of them all… combinations of neuronal electrical pulses and electrical connectivity between neurons that represent sensorially experienced reciprocal interactions between subjects and objects.

That neuronal mass – our brain (mostly cholesterol, the good kind) – increased immensely and quickly in volume and surface area.

Using and modifying existing things such as branches or a piece of wood, stones, chunks of clay, enabled the HUMANS to be creative:

1. To use wood for other purposes than just being a piece of a tree… it could be used as a tool, a club, a farming implement, it could be shaped into, say a wheel, or turned into a figure symbolizing something else again,

2. To use a whole or broken piece of stone as tool for banging, clubbing, scraping, polishing, grinding, rubbing *, hacking, cutting… constructing or de-consctructing,

3. To brake or chip stones on purpose to make tools, weapons, implements, even sculptures,

4. Using, say, red clay or white chalk to adorn oneself and to express certain character qualities or functions,

5. to use clay to make figures that resemble real people or animals or miniature carts to be used as toys, etc.

One of the first recorded molded figurines was made from a piece of wet red earth (clay) that was used to form the first representation of a human: Adam, meaning ‘man made from red earth’ (Genesis 1:27 **).

One such extraordinary beautiful piece is on display in the New Delhi National Museum.

1. Certain engraved texts were purposely designed to be read and interpreted two ways… from left to right and right to left, each reading with distinct different meanings,

2. Sometimes picture symbols were organized on seals in such a way that they could even be read as a letters that also represented a name.

*Etymologically the word ‘memory’ stems from the PIE root *(s)mer-, to remember.