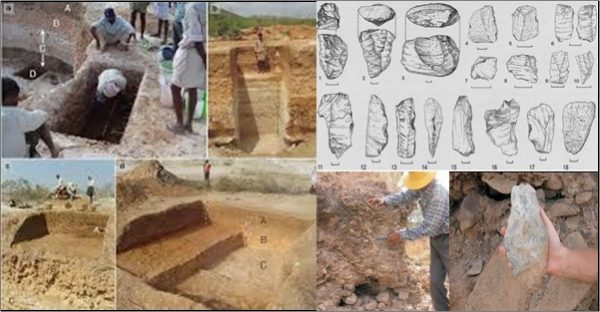 Jwalapuram – the City of Fire! Scientists and archaeologists believe this city located in the Kurnool district of Andhra Pradesh survived the catastrophic Toba eruption. Excavations prove this theory. The Toba supervolcanic eruption occurred at the site of present-day Lake Toba in Sumatra, Indonesia about 75,000 years ago. It is one of the Earth’s largest known eruptions. This cataclysmic volcanic event did affect existing civilizations during that period. Scientists researching on Toba supereruption believe the event caused a global volcanic winter of six to ten years. Lakhs of living beings including human beings perished.

Michael Petraglia, a Professor of Human Evolution and Prehistory in a German institute, wrote in an abstract titled ‘Middle Paleolithic Assemblages from the Indian Subcontinent Before and After the Toba Super-Eruption’: “The Youngest Toba Tuff (YTT) eruption, which occurred in Indonesia 74,000 years ago, is one of Earth’s largest known volcanic events. The effect of the YTT eruption on existing populations of humans, and accordingly on the course of human evolution, is debated. Here we associate the YTT with archaeological assemblages at Jwalapuram, in the Jurreru River valley of southern India. Broad continuity of Middle Paleolithic technology across the YTT event suggests that hominins persisted regionally across this major eruptive event.”

3000 cubic kilometers of rock, mud and ash material were thrown into the air during the explosion or series of explosions, covering Aryavrat Bharata with 6-8 meters of ash and mud, destroying all vegetation, animals, plants, and known civilization. It also destroyed Europe, Africa, China and almost all the civilizations that existed during that time. Drifts in Pakistan and India reached as high as six meters. Smaller tephra beds blanketed the Middle East and East Africa. Great rafts of pumice filled the sea and drifted almost to Antarctica.

This ash layer is measured over 1000 feet in thickness near the volcano to several inches as much as 2000 miles away. Signs of this volcano eruption are even recorded in the Greenland Ice cores. A thick layer of ash several inches to a foot think is found in cores pulled from the floor of the Indian and South China Sea.

Michael Haslam, who specializes in archaeological studies, wrote in one of his research papers published in Quaternary International Volume 258, “Jwalapuram Locality 22 preserves more than 1600 stone artefacts assigned to the Indian Middle Palaeolithic. Sedimentological, isotopic and lithic data along with optically stimulated luminescence ages confirm the site as occupied closely prior to the eruption. The hominin taxon responsible for creating the site is not known, but the stone tool evidence is most consistent with contemporaneous Homo sapiens technologies in Africa and to the east of South Asia. The findings have relevance for understanding Indian Middle Palaeolithic technology, and for identifying the behavioural and environmental adaptations of the hominin group(s) that occupied India when Toba erupted.”

Civilizations existed in India 75,000 years ago. The archaeological site of Jwalapuram proves this. According to the Toba catastrophe theory, there were traces of hominid habitation before and after the Toba event in India. The Toba eruptions indeed blanketed the Indian subcontinent and many regions around the volcanic site in four to six inches of ash. But excavations in South India’s Jwalapuram Valley prove that people residing in that region endured the catastrophe. There were deposits above and below the ash layer where sets of stone tools were found by archaeologists. These stone artifacts were buried in layers of sediments just below the ash layer, proving the existence of ancient Vedic civilization.

More than 15,000 stone artifacts were recovered from the three deepest units. A total of 23 categories of artifacts are represented, including forms that result from distinctive kinds of flaking. Rockshelter test excavations have indicated buried as assemblages, with one rockshelter containing dated microlithic assemblages at least 34,000 calibrated radiocarbon years old.

Most of the artifacts discovered in Jwalapuram are agricultural implements. This proves that Bharata was inhabited by farming community even before 74,000 BCE and lies by the White Historians stand exposed.

The theory that eight Neolithic founder crops from around 9,500 BC were cultivated in the Levant in the Eastern Mediterranean, that rice was domesticated in China between 11,500 and 6,200 BC, that Mesopotamia was one of the earliest cultivators of crops around 11,000 BC stand false. The 75000 year old agricultural implements of Jwalapuram substantiate the fact that cultivation was a part of the Indian culture thousands of years beyond the Mediterranean, China, and Mesopotamia agricultural antiquity!

The Jwalapuram theory is disputed by many researchers. According to a snippet on the Jwalapuram excavations published at factsanddetails.com – “The archaeologists who excavated Jwalapuram more than a decade ago, including Prof. Korisettar and Prof. Michael Petraglia, then of Cambridge University, found something remarkable at the bottommost layer: Middle Stone Age tools dated to around 77,000 years ago and were made by what they believe were modern humans. Those findings created a stir because they frontally challenged the ‘late version’. Prof. Korisettar and Prof. Petraglia, in fact, went on to argue that modern humans could have been in India as early as 100,000-120,000 years ago. “Ever since our paper was published in Science magazine in July 2007, we have been suggesting pre-Toba expansion,” says Prof. Korisettar.

The aforementioned same site also published another snippet – “The Jwalapuram findings did not go uncontested, though. Middle Stone Age tools were made by both modern humans and archaic hominins such as Homo erectus and are, therefore, difficult to assign to one or the other. And India has had archaic hominins at least from about 1.5 million years ago. But Prof. Korisettar argues that the Jwalapuram artefacts are remarkably similar to those made by Middle Stone Age modern humans in Africa. That argument now finds strong support from Dr. Louys who says “it makes sense” to think modern humans were in Asia before the Toba eruption.

Another article on the Jwalapuram excavations published at the openthemagazine.com mentions thus – “But the really big discovery wasn’t just the finding and dating of the ash. Just above this huge layer of ash were hundreds of different types of stone tools made by ancient humans. And, shockingly, underneath the 74,000-year- old layer were hundreds of other such implements. This meant that humans were already present in India all those years ago when the Toba eruption occurred. The artefacts, the researchers realised, were remarkably similar to those that have been discovered and dated back roughly to this period in southern Africa, where the only toolmakers were Homo sapiens.”

It is unfortunate that the Archaeological Survey of India (ASI) is working at a snail’s pace. Many sites need to be excavated and excavation process at many a site across India has stopped. Besides there is lack of staff and the recruitment has almost come to a standstill. According to an article published by The Hindu, “A complete restructuring of the Archaeological Survey of India is required if the country’s vast cultural heritage is not to be lost….A 146 years after it was established, the number of monuments the ASI has declared protected and of national importance is not impressive. There are still umpteen structures in the deep interiors of many States that await attention. The ASI is certainly an organisation that is spread thin. Leave alone conservation and repair work, it struggles even to protect the monuments. For example, it has so far deployed about 5,000 security guards and urgently requires another 10,000. It has not yet been able to mobilise the additional security personnel.”

It is the need of the hour for the ASI to be strengthened to start work at a fast pace.