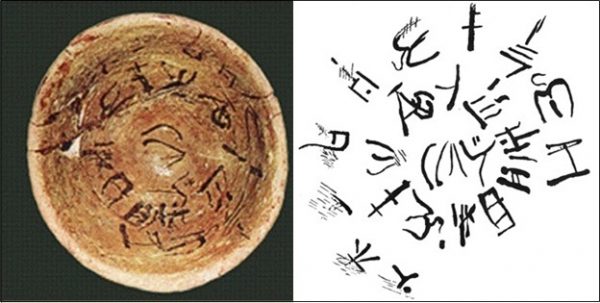 While reading William Durant history book on Crete and Greek Civilization, I found that Crete people were worshipping snake, a mysterious letter 3, and a Fertility Goddess. The mysterious letter 3 would resurface in the temples discovered in Crete.

Discovery channel recently came out with a discovery, saying all over the middle east and the ancient world, they worshipped snakes. This was nothing new for people whose verbal traditions said the same thing and had not converted to the new religions of last 2 millennial! The snake worship was often associated with the Phallic Worship, which is nothing but a symbol of the Male Principle or the Father Principle Worship. The Fertility Goddess was nothing but the symbol of the Female Worship Principle.

The letter “3” worship reminded me of the sign AUM, and many years back, I found it in the archives of Crete Museum, which I carefully saved in my private collection. 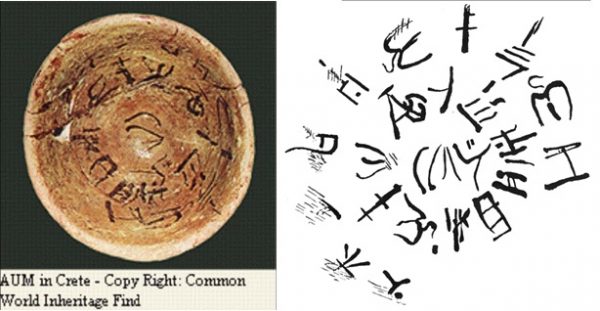 On the right of the above image is a Linear – A Script from Crete which was spread in Crete, Greek, Turkey and Palestine.  Yet another proof that that Ancient Middle East was Sanatan Dharma.

Look at the “11” and “5” O’Clock position of the imaginary circular clock dial in the top left picture, and you will see the AUM signs. 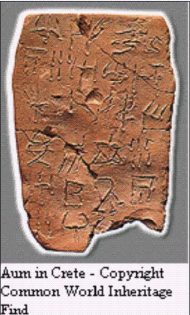 Now also look at the “1” O’Clock position of the top right picture. These are very ancient inscriptions and one should account for damages, repairs, rudimentary nature of scripting and inscription technology by the ancients.

Other circumstantial evidence can be found by the fact, that Phoenician and Brhami Script were the same (see my other blogs). And if one compares the following pictures, one would be reminded of some common postures used by Indians even today. The same postures can be seen in Indus Valley Civilization.

Picture showing “Namaste” Posture while standing. Allow allowance for lack in sophistication in sculpture to show two hands folded and protruding in 3 dimension. 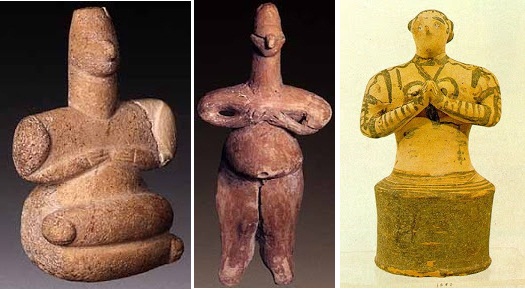 Another picture below showing “Padma-Asan”. 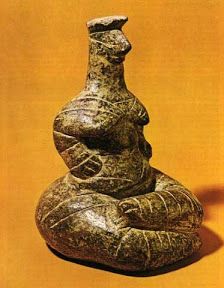 Still not convinced. Look at the below picture of Snake Goddess from Crete, and see the “Bindi” or the “cicular mark”, which is often put by Indian women. 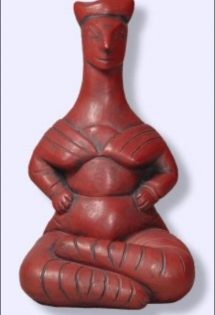 Below two pictures in collage show Swastika sign of Hindus. In another posting I would show presence of Swastika sign all over the world. My next posting on this blog would be about Aum Sign in America. 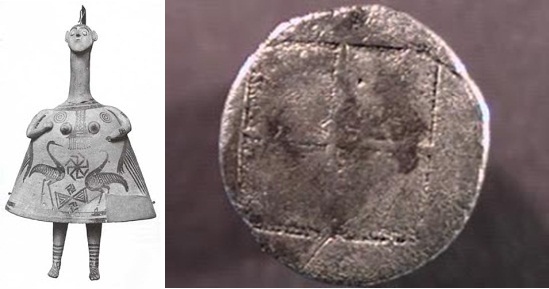 Still not convinced? Go and see movie Troy, and you will find that like Hindus, the Troy people would cremate and mourn the dead for 13 days, and on the last day of the mourning, they would have a feast. Their women would wear something like an Indian Sari. Troy and Crete were the early civilizations that influenced Greek Civilization.

Ancient Greek and Sanskrit are very close. There is a lot of parallelism and similarity between Greek and Hindu Religion, Languages, Philosophies, Science and Astronomy. Lately, as the field of researchers have opened up the club of history writers, which was initially dominated by colonist historians, there is a “pressure” to revisit these facts. Internet has only aided this phenomenon. There were honest historians among the colonist historians but for obvious reasons, they were not very popular and accepted by their main stream brothers.

Then history usually demands physical and “hard” proofs, like discovery of archaeological sites with artifacts. “Soft” facts like similarity in Languages, Religion, Philosophies, and Science are difficult to admit and usually hard to prove that which way the influence or migration happened. Grudgingly, now these similarities are being labelled under Proto-Indo European Civilization. DNA study, and other observations of mine, which I will write about sometime, now admits that the migration happened from the North-Western Region of Indian Peninsula to Europe in 40,000 BC.

It would be wrong to say that all the things that make up a civilization happened in the last 5000 years only and before that there was no civilization. The western thinking was very much influenced by Bible’s Genesis, which said that the world was made in 7 days, around 5000 years back, and this was a big influence to them. In another posting, I will show that the stories of Bible, in Old Testament specially, are of Babylonia and Egyptian origin, which were copied from Persians and their eastern sources, but some where misunderstood or taken literally.

On King Minos, Thucydides, and Herodotus had perpetuated traditions regarding King Minos, the great law-giver.

On Hindu Manu, the Manu Smriti Scripture of Ancient Hindu Laws is well known all over the world. Traditions says that the laws were given by Manu to Hindus.

If one puts the hard aspirate, Sanskrit “visarga“, as often put before the Singular Subjective Nouns and Adjectives, it becomes Manu(h) or Manus.

Is it a strange co-incidence? I went to Wikipedia just to check out, if I could get some additional information on the subject. And guess what, this is what I got, which proved my thinking was not unique or weird!

‘It is not clear if Menes is a name or if it was the Cretan word for “King”. Scholars have noted the interesting similarity between Minos and the names of other ancient founder-kings, such as Menes of Egypt, Mannus of Germany, Manu of India, and so on. There is a name in Linear A mi-nu-te that may be related to Minos.’

Update: Strangely that I had to come across this, while trying to write up the follow up posting. There is a place called Gypsades at Knossos, and if you note, the first world sounds like Gypsi Des. Gypsies are supposed to have originated from India, but the time-line is not so distant in past, which does match the time-line when one talks about the Crete Civilization.

This article was first published at the author’s personal blog commonworldinheritage.blogspot.com.

An IITian from Kharagpur and MBA in Finance and Economics from Santa Clara University with 22 Professional Patents in Networking, Sunil Srivastava is a Yogi, seeker of Truth, Researcher, and Polymath. His personal blog is CommonWorldInheritage.Blogspot.Com.