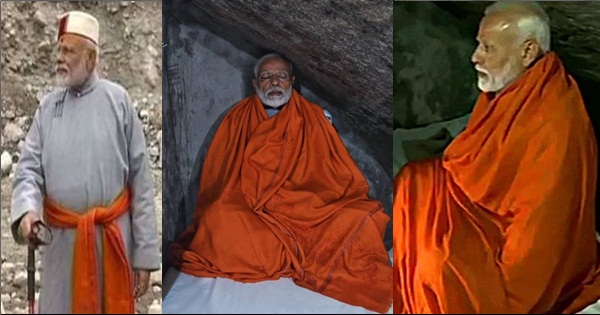 The picture of Modi meditating in the cave with his eyes closed, meditating reminded me of a picture from another era from childhood. It is that of Swami Vivekananda sitting on the last rock in the ocean facing the vast sky before India. I imagined then and do so now how they both would face infinity, sitting alone. Two solitary men, in search of answers, the first who spread the glory of Indian civilization to the world and the other, his disciple who was influenced by him to follow  his footsteps a hundred years later.

Is it any secret how some of our previous Prime Ministers and party Presidents celebrated the end of electioneering? With scotch and expensive alcoholic drinks and going to retreats. Someone from the present lot might be even going to Thailand or a European destination to unwind.

So, why is our Prime Minister going to a remote cave to meditate? The answer lies in that his vision for his country is spiritual much as the way his idol Swami Vivekananda had it a hundred years ago. He is seeking an answer that can only be found in a place like that. He, like his idol, also knows that the task he has, that is to restore our civilization to its lost glory is only possible through solitude, contemplation and meditation, one that is available where the Dharmic energy is at its peak.

Two pictures, one of a monk and the other of a political leader, separated by more than a hundred years. Yet both have similarities. They had both realized that the path ahead for a people steeped in slavery through numerous invasions and vivisection of their motherland was not easy. For both the men their meditation was not for enlightenment but for finding that path for their countrymen so that they never become slaves again.

No leadership manual teaches how to lead a people out of from slavery after a thousand years. A leader has to find it alone in wilderness. Moses found that in the desert. Leaders down through the ages have found it in solitude with no one for miles around.

Both the cave and the rock have taught lessons to those men who made history. They absorb his inner doubts to give him a direction who faces insurmountable odds.

It is said Swami Vivekananda when he went to the rock was deeply troubled about the future of Bharat, then a slave nation bound in chains. It is said as he sat in meditation, he became still, calm and his face glowed with love. When he came back he knew that his motherland will live despite a million assaults because the Dharma has taken deep roots and will do so in the times to come.

Today, the picture of Modi sitting, serene and calm may do the same and get etched on the minds of a billion people and for the future generations.

India’s foundation is on ‘Sanatan Dharma’, on principles that are deeper than time. Modi realizes that and unlike any other before him wants to base his model of new India on that vision. He knows that the renaissance of India, whenever it comes will be based on Dharma and a civilization that gave us Geeta, Upanishads and the Vedas. I believe by sitting in the cave, he is one step nearer to that path on how to take it forward.

On seeing his picture sitting inside a cave, my daughter asked me, “Why did he have to go that remote cave? There are wild animals there. It is covered in clouds and if he sits there all night, isn’t it dangerous?” When I told her about Swami Vivekananda’s meditation on the rock, she asked, “Why did they have to go to such places to find their answers?”

The remoteness of the cave, the last rock on the sea symbolize Indian civilization like no other and in a way that few can understand. India’s geography is Dharmic and where its boundary ends has a cosmic feel that Swami Vivekananda felt sitting on the last rock. Only a few feel it. It has been there since eternity, as long as the idea of India has existed. That emotion, I believe, is primordial and lives in the heart of many and would never die. It is felt and absorbed in silence and can neither be spoken about nor shared through words. The freedom fighters of Cellular Jail, the soldiers who died for their motherland felt it before leaving their body. That inner feeling comes for those who are ready, have sacrificed everything for their motherland.

Will those who have vilified him for the last so many months and years understand this? The man in the cave, I believe, is not bothered and feels no anger for them just like his mentor felt no anger for those who vilified him and or had plundered India. Like Swami Vivekananda, the man in the cave is thinking of his motherland and has a mission that he is determined to achieve. For him nothing comes between him and the faces of his people. The faces of billions of people and their destiny is what, I believe, he will be thinking about all night with his eyes closed.