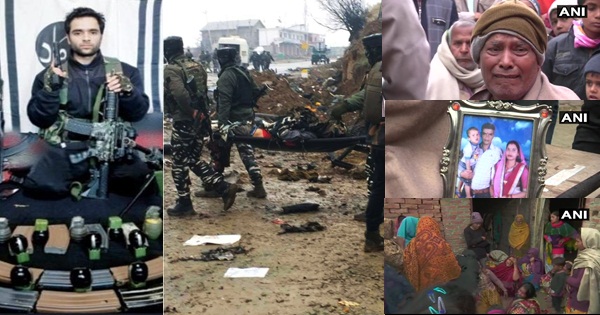 Indian Security Forces! They make us feel safe round the clock. They keep guard at the borders in the extremes of climate conditions, in snow and uneven terrains, in desert and marsh to ensure that we continue our humdrum activities without fear. It is the nation that matters most to them that keeps them strong in mind and heart, away from friends and family. Every other day, they sacrifice their lives for us – at the hands of terrorists and naxals. Ironically the forces who make us feel safe are not safe at all!

A soldier has rightly penned the following lines, which has gone viral on social media: 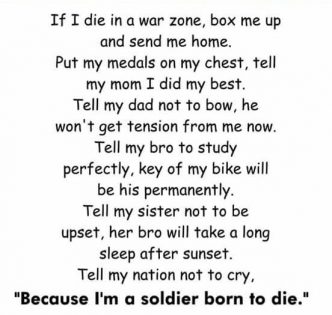 On January 14, at least 44 Central Reserve Police Force personnel attained martyrdom after a suicide bomber in a Mahindra Scorpio car loaded with 350 kilograms of explosives rammed into their convoy. The barbaric act of terrorism took place on the Srinagar-Jammu Highway at Awantipora in Pulwama district of Jammu and Kashmir. This terror attack was conducted by banned Pakistani terror group Jaish-e-Mohammed (JeM).  The suicide bomber terrorist was identified as Adil Ahmad Dar. 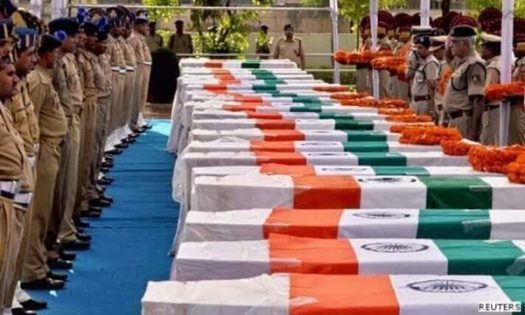 The nation mourns the martyrdom of the jawans. Maj Gen GD Bakshi wrote on the Pulwama terror attack – “Cry my beloved country!!This is a slap in the face- far Bigger than the one we got in URI. This is absolutely insulting. it is a Grave and premeditated PROVOCATION and most ill timed. 30 boys martyred and still counting. Are we a nation of spineless hijras? Can’t we hit back hard enough? We were delighted when Uri Surgical Strikes happened. We thought then that now it would be open seasame. For every one strike here we would have 10 across the LC.we were stunned therefore that there was a FULL STOP after the first and extended celebrations started. A nation like Pak will be deterred by one tactical level Strike by 250 men? For how long.? In the 1965 war we had used some 600,000 men and half our Air force. in 1971 we had used 900,000 men our entire Air force and navy and broken Pak in two. In Kargil we had used 60,000 men and good amount of air power and Bofors. Don’t you think we now need to do a great deal More? If it means war- so be it. Pakistan’s economy is sinking – a major or even a medium level fight will FLUSH this country down the economic COMMODE.” 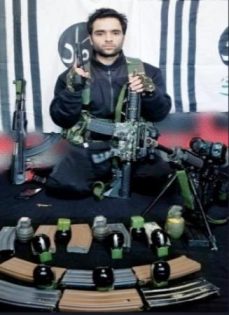 Minutes before the terror attack was carried out, Jaish-e-Mohammed released a video that featured the suicide bomber Adil Ahmad Dar. This terrorist, a 22-year-old localite of Pulwama, was also known as Waqas Commando of Gundibagh, Adil Ahmad Gaadi Takranewala and other aliases. Dar dropped out of school after class 12 two years back. This corroborates how Pakistani terror outfits are using local youth to carry out their terrorist activities in the Indian soil.

In the video, terrorist Dar was seen brandishing rifles, grenades and magazines. He spoke about atrocities faced by Muslims of Kashmir. There is a big difference between ‘attacker’ and ‘victim’. Who are the biggest victims of the Kashmir issue? They are the Kashmiri Pundits! Of the several exoduses that took place, the 1990 Exodus was one of the biggest. The attackers forced the Kashmiri Pundits to flee from Kashmir. Today Kashmiri Pundits are still refugees in their motherland. Who faced atrocities here? Why was the terrorist playing the victim card? Ironically and unfortunately, a huge chunk of the Indian population sympathise with the attackers. They never raised issue about Kashmiri Pundits.  It is no wonder that hundreds of such antinational forces signed the mercy petition for Pakistani Lashkar-e-Taiba Islamist militant Mohammed Ajmal Amir Kasab who attacked the Taj in Mumbai and terrorist Afzal Guru who attacked the Parliament. Unless such anti-national forces are controlled, the problem will persist. It is the enemy within that the nation needs to tackle at an urgent level. Ever since Independence, the Kashmir issue has only escalated with terror outfits carrying out terrorist activities, targeting the Indian armed forces and civilians alike. This problem is a result of the wrong decisions taken by Mohandas Gandhi and Jawaharlal Nehru. And India is still paying the price at the cost of the martyrdom of hundreds and thousands of jawans. 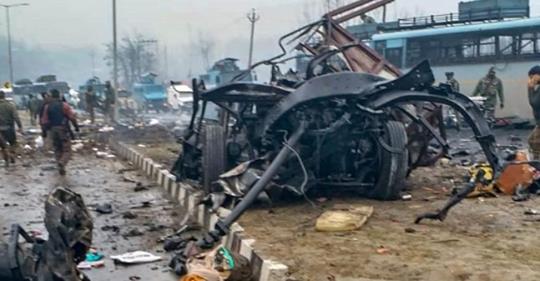 The video featured Adil Ahmad Dar giving an inflammatory address to Kashmiris. According to a timesnownews.com report, the terrorist in the video said, “The war that they can’t win with force, they are trying to win by compromising your belief. They want to mislead you from the etiquettes of Islam. They want to mislead you from the path of Islam by luring you with worldly pleasures.”  Attacking the Indian government, to quote the report, Dar said, “Listen to me carefully you Indians, we are going to unleash such terror on you that people like you who drink the urine of cows won’t be able to contain.

Terrorist Dar, as reported by opindia.com ‘further makes a reference to the demolished Babri Masjid and expresses hope for its revival. He also makes a reference to the Hoors in Jannat and says, “Apne kirdar ko bedaag rakho taki jannat ki hoorein tumhari muntazir rahe“. Brandishing various assault weapons in the video he says, “By the time this video reaches you, I will be in heaven.”’ 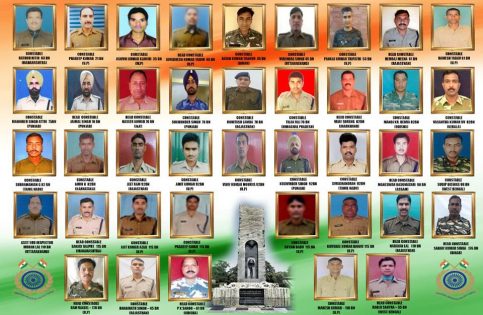 It is unfortunate that stone pelters pelted stones at the injured jawans soon after the terror attack. Had they been true Indians, they would have never done that. Stone pelters and anyone supporting terrorists and terror acts are terrorists! Why doesn’t the govt deal with the stone pelters menace with an iron hand? There are around 40,000 stone pelters in Jammu and Kashmir. All stone pelters are paid handsomely. Dailymail.co.uk had carried a news item (India Today TV report) with the following headlines on stone pelters – ‘This is our bread and butter’: Undercover reporters film Kashmiri ‘stone-pelters’ admit to being paid Rs 7,000 a month for throwing stones and Molotovs at Indian forces. As per the report, “Zakir Ahmad Bhat, Farooq Ahmad Lone, Wasim Ahmed Khan, Mushtaq Veeri and Ibrahim Khan made startling confessions: from being on the payroll of their underground masters to carrying out deadly attacks on security forces, public servants and property in the troubled region.” 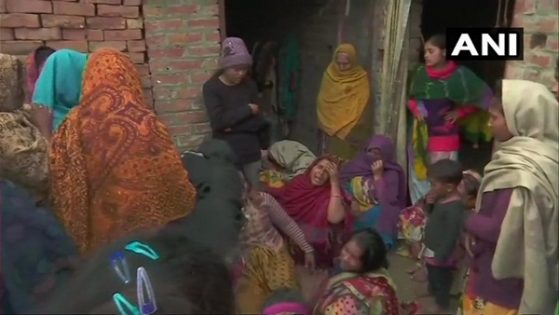 The report further quoted thus, ‘It’s Rs 5,000-Rs 7,000 (£80) a month and clothes. Sometimes shoes as well,’ said Bhat when asked whether he was paid to charge at security forces with stones.” The stone pelters did not reveal the names of their financiers. They said, as quoted in the report by dailymail.co.uk – ‘will die but won’t reveal their names. It’s the question of our bread and butter.’

For stone pelter Lone, his daily income from organising shutdowns and stone-throwing demonstrations ranged from  Rs 1,000 to Rs 5,000. For Wasim Ahmed Khan, it was Rs. 5000 to 6000; he admitted of pelting stones since 2008. Ten long years! For Veeri, it was ‘Rs 700 a day on weekdays and up to Rs 1,000 on holy Fridays’. Even young children were also recruited as pelters and they were paid around Rs 7,000 – Rs 7,500. What would be the future of the state when such a situation prevails? Enforcement of the rule of law is the need of the hour to deal with stone pelters. 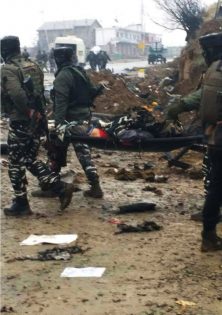 Rs 5000 to Rs 7000 a month! Why are strict actions not taken against the stone pelters? According to Maj Gen GD Bakshi, there are around 40,000 stone pelters in Jammu and Kashmir. And they get paid to pelt the lethal weapons at the Jawans. As per GD Bakshi, 20,000 of the stone pelters were arrested, but later freed by Mehbooba Mufti. CM Mufti described the withdrawal of cases against the stone pelters as a ray of hope for the young boys and their families. She termed it ‘an opportunity to rebuild their lives’. Ironically, soon after their release, they killed one Army Jawan and wounded many by pelting stones!

A section of politicians are playing the political card and the ‘blame game’ on Pulwama terror attack instead of delving into the problem or finding a solution. According to an Indian Express report – Congress spokesperson Randeep Singh Surjewala Thursday called the terror attack on CRPF convoy in Jammu and Kashmir’s Awantipora area today a “compromise on national security by the Modi-led BJP government”. Condemning the attack, Surjewala tweeted, “Uri, Pathankot, Pulwama- the terror list and compromise of National Security by Modi Govt continues unabated.” 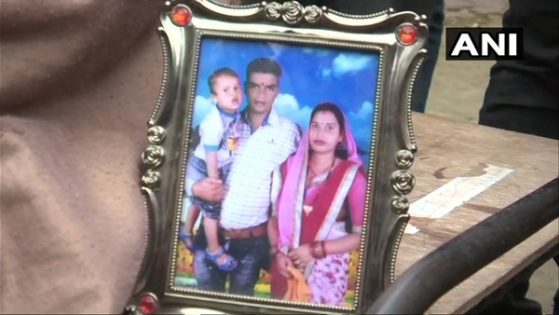 A pic of martyred CRPF personnel Pankaj Tripathi with his wife and child. Image courtesy: Tweet by ANI

And a few from the media fraternity put sarcastic remarks on the Pulwama terror attack incident. A video of anti-national forces celebrating the success of the attack by bursting crackers on the streets of Jammu and Kashmir has gone viral.

It is time strong action is taken. According to an ANI tweet – CRPF Personnel Ratan Thakur’s (who lost his life in Pulwama Terror Attack) father in Bhagalpur: I have sacrificed a son in Mother India’s service, I will send my other son as well to fight, ready to give him up for Mother India, but Pakistan must be given a befitting reply. Family members of the other martyrs and many citizens demand strong action.

To quote Maj Gen GD Bakshi further, “Hit Back Hard Even If It Means War!” Govt, are you listening?