“We Waited 3 Years! Why Kanhaiya and Gang not Prosecuted Yet?” – GD Bakshi 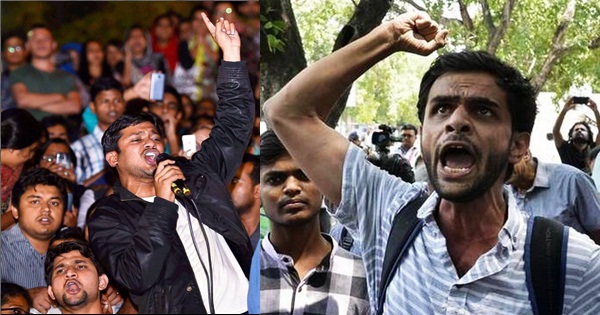 JNU sedition row! On February 9, 2016, Kanhaiya Kumar along with 9 students of JNU, namely  Umar Khalid, Mujeeb Hussain, Muneeb Hussain, Umar Gul, Anirban Bhattacharya, Aquib Hussain, Rayeea Rasool, and Bashir Bhat, shouted anti-national slogans at a program in the JNU campus.  It was against the hanging of Parliament attack convict Afzal Guru that Kanhaiya and Gang organized an event on his 3rd death anniversary to protest his ‘judicial killing’.

Terrorist Afzal Guru had plotted and provided logistic support to the five Jaish-e-Mohammed terrorists who attacked the Indian Parliament on December 13, 2001. He was tried and executed on February 9, 2013 at Tihar Jail. In this attack, nine people were killed.

According to a Hindustan Times report, the JNU students “organised a cultural evening to express ‘solidarity with struggle of Kashmiri people for their democratic right to self determination’.” No wonder the anti- national forces expressed solidarity of terrorists from Kashmir! What about solidarity of Kashmiri Pundits who were forced to flee from Kashmir and still continue to live as refugees?

What were the anti-national slogans that Kanhaiya Kumar and Gang raised in the JNU campus?

‘Afzal, we are ashamed
Your murderers are still alive’
‘How many Afzals will you kill?
An Afzal will appear from every home’
‘India, you ’ll break up into parts
Inshallah, Inshallah’
‘We won’t stop till we get azadi…’

Supporting a terrorist and shouting slogans against the nation is also a terrorist. It is but unfortunate that a large chunk of Indian citizens support  the anti-national forces, Kanhaiya and Gang.

A video of the anti national elements shouting the above slogans went viral. On February 12, 2016, Police arrested Kanhaiya Kumar over sedition charges and was sent to judicial custody till March 2. Six days after his arrest, i.e. on February 18, Kanhaiya moved the Supreme Court seeking bail citing reasons of threat to his life resulting from a possible attack by co-prisoners. A Delhi court granted him interim bail on March 2 for six months. Thenceforth, he generated public sympathy for himself, especially from the masses, who were more anti-India in nature.

The maximum punishment for sedition is life term. Three years passed by, but Kanhaiya Kumar and his Gang has been roaming free! On January 14, 2019, the Patiala House Court in Delhi charge sheeted Kanhaiya and Gang – 10 JNU students  as main accused in the JNU sedition row.  According to a India Today Report, “The accused have been charged with offences under sections 124A (sedition), 323 (punishment for voluntarily causing hurt), 471 (using as genuine a forged document or electronic record), 143 (punishment for being a member of an unlawful assembly), 149 (being a member of an unlawful assembly), 147 (punishment for rioting) and 120B (criminal conspiracy) of the Indian Penal Code (IPC).”

The video footage of the involvement of Kanhaiya and Gang shouting anti-national slogans was genuine. As per the same report by India Today,“The police claimed it has video clips to prove the offence which has been corroborated by the statements of the witnesses and that Kumar was leading a procession and allegedly supported seditious slogans raised on the JNU campus in February 2016.”

Why are Kanhaiya and Gang still roaming free? It has been three years and yet they are not yet punished. Is the AAP government defending these anti-national forces? In this context, Maj Gen GD Bakshi wrote on his Facebook timeline, “The anti-national forces are putting up a stout defense of Kanhiya and gang of the JNU sedition case. The AAP govt is refusing to give sanction to prosecute these anti- national elements.They have the protection of Foreign funded NGOs and sections of the Media and political parties who are bent upon making a mockery of the law. This is tantamount to OBSTRUCTING justice and shielding sedition. The public must mount a pressure campaign to see that permission is URGENTLY accorded. We have waited for 3 years to see the FIR filed. Do we have to wait another 3 Years for sanction? Will the AAP set its own kangaroo Court to pronounce these people not Guilty. This is a PLOT. Let’s start the countdown clock to see how long AAP takes to give sanction.They are hoping it will be forgotten and put into the dustbin – public memory is short. Not THAT short.” 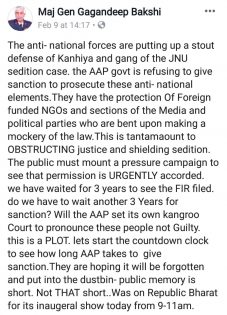