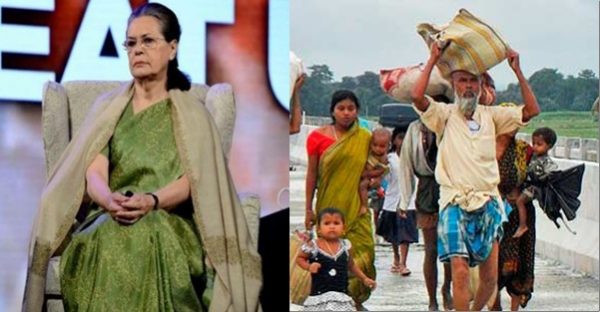 There was an organized genocide of the Bengali Hindu population by the Pakistani Army in present-day Bangladesh in 1971, when 3 million i.e. 30 lakh people were killed, 20 lakhs of them Hindus & also other Muslims when the Pakistani religious leaders declared the Bangladeshis to be un-Islamic, and more than 2,50,000 Hindu women were raped. This forced many to migrate to India and live as refugees, most of whom were Bengali Hindus.

After 1971, however, there has been a huge influx of Bangladeshi Muslims into Assam. This resulted in huge protests, which often turned violent, that culminated with the signing of the Assam Accord between the Government of India and the leaders of the movement in 1985. The Muslim population in Assam grew from 12.4% in 1901 to 24.68% in 1951. From 24.56% in 1971 it grew to 30.9% in 2001 and to 34.22% in 2011, a huge increase. This is impossible without immigration from Bangladesh. The following statistics on growth of Muslim percentage in Assam are taken from Scroll.in itself, a Leftist website. 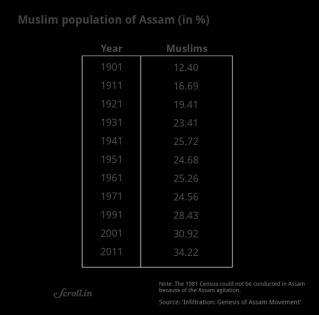 A major reason for the high infiltration of Bangladeshis was due to the IMDT Act, 1983 present in Assam which was done by the Congress. Former Congress President Sonia Gandhi during her campaign in the state in 2006, had allegedly promised to amend the Foreigners Act which would prevent the deportation of illegal Bangladeshi immigrants.

OpIndia.com reports: “As per a WikiLeaks cable from 2006 allegedly sent by US consulate officer in Kolkata on 16th February 2006, on 11th February 2006, UPA chairman and Congress President Sonia Gandhi had travelled to Assam to launch the 2006 state assembly campaign.

The cable says that while the BJP and Asom Gana Parishad (AGP) the main opposition in Assam were fragmented, Congress still had not lost support from the critical Muslim community. Sonia Gandhi had then offered to amend the Foreigners Act to prevent the deportation of illegal Bangladeshi immigrants.

As per the cable (emphasis added),

The Muslim vote is likely to determine whether Congress can retain its majority. The Muslim community’s importance has been magnified by a steady influx of Bangladeshi immigrants and Muslims presently hold 13 Congress seats in the assembly. Traditionally, Congress had been the party of choice for the Muslims as it protected illegal Bangladeshi migrants from deportation. Congress also supported the Illegal Migrants Determination by Tribunals Act (IMDT) of 1983, applicable only in Assam, which made identification, detection and deportation of foreigners in Assam incredibly complex and protected post-1971 illegal Bangladeshi migrants.

Congress’ relations with the Muslims suffered a setback in July 2005, when the Supreme Court ruled the IMDT unconstitutional.

The Congress had passed the IMDT Act in 1983 to determine whether a person is or is not an illegal migrant in the state of Assam. In rest of the states, the identification of foreigners was done through Foreigners Act, 1946. The cable further states (emphasis added):

The Congress has tried to appease the Muslims by not enforcing the Foreigners Act and in her recent visit, Gandhi offered to amend the Act. According to Assam Congress Spokesman Abdul Khaleque (protect), the amendment would effectively bring the IMDT provisions under the Foreigners Act and again create special exceptions and a tribunal for Assam…

Another cable dated 29th July 2005 sent by US consulate in New Delhi speaks about the repealing of the Illegal Migrants (Determination by Tribunals) (IMDT) Act in Assam. The cable says (emphasis added):

The Congress government, which passed the IMDT Act in 1983, has been accused of catering to mostly-Muslim Bangladeshi migrants in order to use them as a vote bank, and of allowing “demographic aggression” in Assam. The total lack of political will by the Congress-led government, as well as logistical obstacles to implementation will likely blunt any surge in deportations, but the repeal will nonetheless intensify communal politics in Assam and hurt the Congress party’s electoral prospects ahead of spring 2006 elections there…

As more migrants gained the right to vote, they quickly became a protected vote bank for Congress and Communist parties…”

Now one doesn’t need Wikileaks to know that Sonia Gandhi did this. All this is already in public. On 12 July 2005, the SC struck down the IMDT Act of 1983 which protected Bangladeshi infiltrators. A Rediff.com report of July 2005 was:

“The Supreme Court on Tuesday struck down the Illegal Migrants (determination by tribunals) Act, 1983. The move is seen to be detrimental to the interests of millions of Bangladeshis in the country. The northeastern states, suffering for decades from a steady influx of Bangladeshis, have been demanding that the Act be scrapped and the illegal immigrants be deported under the Foreigners’ Act 1946.The Illegal Immigrants Act is seen to be against the interest of northeastern states, especially Assam.

The Act provides that anybody who settled in Assam before 25 March 1971 is a legal citizen of India whereas the cut-off date for the rest of India is 19 July 1948. The apex court directed that all tribunals functioning under the IMDT, which has been declared unconstitutional, would seize functioning with immediate effect.

The court, allowing the petition filed by Asom Gana Parishad leader Sarbanand Sonawal [Now Assam Chief Minister], said all pending matters before the IMDT Tribunal would stand transfer to tribunals under the Foreigners Act.Taking note of the huge influx of Bangladeshi migrants into Assam, the court directed the state government to constitute sufficient number of tribunals under the Foreigners Act to deal with the situation effectively…”

Far from obeying the orders of the SC, and deporting the Bangladeshis or even trying to deport them, the UPA headed by Sonia Gandhi did the opposite, and amended the Foreigners Act 1946 to save Bangladeshis!

An article written in May 2006 titled: “The next govt and future of Asom” by Rekha Bhattacharjee said:

“The Centre under Manmohan Singh and Sonia Gandhi has now amended the Foreigners Act [on 10 Feb 2006] so that claims are referred to a tribunal where Smt Gandhi assured a rally while campaigning in Asom that a hearing would be held before a person is declared a foreigner. Ironically genuine citizens are at risk. The BJP has condemned these maneuvers.What then is the result of rather tardy electioneering? First and foremost, it compromises national security if foreigners can march in unchecked. But there are greater implications. Bangladesh has always had its eyes on Asom as a future annexation. A few years ago, a delegation of intellectuals from Bangladesh to China declared that Asom will one day become part of Greater Bangladesh. The Congress seems oblivious to such a danger, or, if it does, it ignores that danger for short term political gain…”

On Friday, 10 February, 2006, The Ministry of Home Affairs published two notifications amending the Foreigners Tribunal Order of the Foreigners Act 1946, thereby proving once again as was stated by D.N. Bezbaruah, the then editor of the Sentinel that to the Congress party, remaining in power was more important than the security and integrity of the country.

This prompted Mr Pramod Mahajan, the then BJP General Secretary to say: “Sonia Gandhi says the Foreigners Act was amended to protect genuine Muslims. What else can you expect from a person of foreign origin?” This was one of his last public statements before he was shot at on 22 April 2006 and passed away on 3 May 2006.

But Sonia Gandhi’s act was overruled by the Supreme Court again on 5 December 2006. The SC held as illegal and unconstitutional the amendment to that Act and said that the whole country must have a uniform law on deportation.

“The central government suffered a major setback on Tuesday [5 Dec 2006] with the Supreme Court holding as illegal and unconstitutional the controversial Foreigners (Tribunals for Assam) Order, 2006 that puts the onus of proving a particular person a foreigner on the complainant. A bench of Justices S.P. Sinha and P.K. Balasubramanian came down heavily on New Delhi for bringing the amendment after the apex court had declared the Illegal Migrants Determination by Tribunal Act (IMDT) as unconstitutional.

The bench imposed an exemplary cost of Rs.25,000 to be paid to the petitioners, Sarbananda Sonowal and Charan Chandra Deka, who challenged the controversial Feb 2006 order. While striking down the IMDT Act, the apex court had given necessary directions for the constitution of adequate tribunals to determine illegal migrants, the bench said.

The petitioners had challenged the validity of the 2006 order contending that the very same provision that was struck down under the IMDT Act had been incorporated in the 2006 order to give protection to illegal migrants. They alleged that the impact of the order was to overrule the Supreme Court ruling.”

Thus there is no need to cite Wikileaks to know what the UPA did. They will continue this until the Hindus become a minority everywhere. In Assam the Muslim % of population has grown from 12.4% in 1901 to 34.22% in 2011, a huge increase in a mere 110 years. It is inevitable that after few years, Hindus will become a minority in Assam if the influx from Bangladesh and high growth rate in Muslims continues, and then meet the same fate as they did in Pakistan, becoming less than 2% of the population.

Of course, for our liberals, even this will be a good thing, since they consider Hindu religion as evil, and the Hindus as ‘cruel, medieval’ people. But the Hindu intellectuals need to expose this, and defeat our Leftist propagandists, who are concerned about India becoming a ‘Hindu Pakistan’ whereas there is a far more serious danger of India becoming an ‘Islamic Pakistan’.

This article by the unknown author was first published in Satyavijayi.

Latest posts by Unknown (see all)