Ram Prasad Bismil: A Journey from Poetry, Loot of British Treasury to Martyrdom 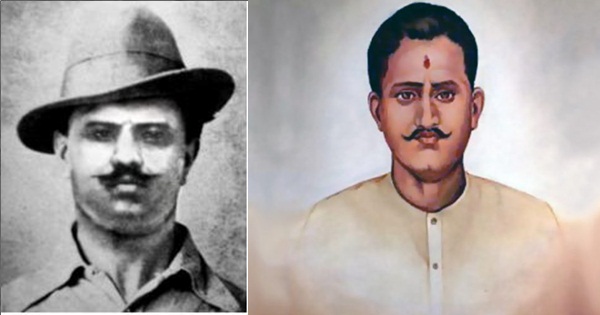 Ram Prasad Bismil was a freedom fighter, patriot, role model, born leader, philosopher, poet, a reformer and an ardent follower of Swami Dayanand. His life was dedicated towards freedom of Motherland. His illustrative contributions to the freedom movement were noted in the Mainpuri Conspiracy of 1918 and the Kakori conspiracy of 1925 against British rule. His love for motherland, patriotism and national spirit were kindled and he started an organization called Hindustan Socialist Republican Association.

His early childhood suffered in the hands of poverty. He had to quit his studies to support his family. Later he started visiting Aryasamaj and met Swami Somdev. Swami Somdev inspired him to read Satyarth Prakash, a revolutionary book authored by Swami Dayananda, the founder of Aryasamaj. Ram Prasad influenced by its teachings started practicing strict celibacy as well as controlled diet. He started performing daily Agnihotra and Sandhya. His disciplined life and exercise schedule transformed him into an impressive athlete with great stamina. This was not his stop. He went ahead with his oratory skills and pen.

Ram Prasad Bismil assumed his pen name as “Bismil” and authored patriotic poems in Urdu/Hindi and many books. His nationalist poems inspired many. The main inspiration that made him pen his poems were his incomparable love for India, revolutionary spirit and a burning zeal to free India from the foreign rule. He was ever ready to lay down his very life in the altar of the freedom struggle.

Sarfaroshi ki Tamanna – the most famous poem of Indian Freedom was authored by Ram Prasad Bismil. He authored his Autobiography while waiting for his hanging sentence in Jail. This is considered one of the finest works in Hindi literature. The autobiography of Ram Prasad Bismil was published under the cover title of Kakori ke Shaheed by Ganesh Shankar Vidyarthi in 1928 from Pratap Press, Kanpur. A rough translation of this book was prepared by the Criminal Investigation Department of United Province in British India. The translated book was circulated as confidential document for official and police use throughout the country.

In jail Ram Prasad Bismil came up with the song “Mera rang de basanti chola”. It became one of the most iconic songs of the pre-Independence era. His other notable literary contributions are Bolshevikon Ki Kartoot: A revolutionary noble on Bolshevism, A Sally of the Mind (Man Ki Lahar), Swadeshi Rang, Swadhinta ki Devi: Catherine, Kranti Geetanjali, Deshvasiyon ke Nam Sandesh (en: A message to my countrymen).

He came across Ashfaqullah Khan and both of them became intimate friends despite hailing from different communities. Later in his autobiography, Bismil devotes a huge segment to discuss the friendship he had with Ashfaqullah. In fact, both of them were tried and hanged in different jails on the same day for the same conspiracy. 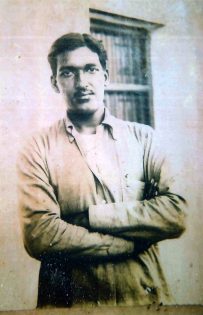 Together with Ashfaqullah Khan and six others, Ram Prasad Bismil looted the government treasury box that was moved in Saharanpur-Lucknow passenger on 9 August 1925. This brave incident nearly stunned the British government that viewed them as a great threat to their peaceful existence in the subcontinent. It created a great upheaval in British India. The retribution was severe when more than 40 revolutionaries were arrested from all over India.

Ram Prasad Bismil defended his case himself and refused to take any help from the Government. In an 18-month long drawn case, Ram Prasad Bismil, Ashfaqullah Khan, Thakur Roshan Singh and Rajendra Nath Lahiri were sentenced to death under section 121(A), 120(B), 302 and 396 of Indian Penal Code. 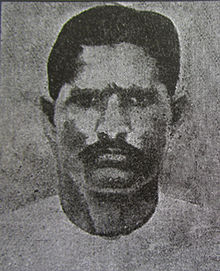 On 19 December 1927, Bismil woke up at 3.30 a.m. as usual in the morning, did his formal duties of daily routine, meditated for half an hour, wore new dhoti-kurta and sat in the waiting of his long awaited beloved death. At the appropriate time, the Magistrate came along with the jailor, unlocked the condemned cell and asked Bismil to get ready. The Magistrate was astonished to see him smiling. Bismil rose up immediately and said – “Let us move!”

He went cheerfully up to the gallows saying his last good bye to whosoever met in the way. He stood up at the altar of gallows, kissed the noose and spoke very loudly his last wish – “I wish the downfall of British Empire!” Then he whispered the Vedic prayer “Om vishvaani dev savitur duritaani paraasuv, yad bhadram tann aasuv” (O God of all creature! let the ill will be removed and the good prevail in our souls) And then he put the noose around his neck like a garland. 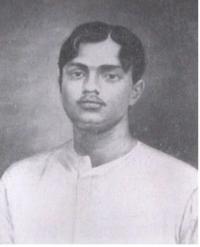 The hangman pulled the lever of gallows and the body of Bismil hanged in the open air. For half an hour he was kept hanging to safeguard the certainty of death. In this way a daredevil son of Mother India departed for the common cause of every Indian’s freedom.

Looking into the huge rush at the main gate of the jail, authorities broke open the wall in front of gallows. The dead body of Ram Prasad Bismil was brought out and handed over to his parents Murlidhar and Moolmati. A huge rush of about 1.5 lakh people had gathered from all over the country. They took the dead body of Ram Prasad and carried it to the bank of Rapti under a grand procession.

The dead body of Bismil was kept at Ghantaghar of Gorakhpur for the last view of the public in the City. From there it was taken to the Rapti River where the last funeral of this great martyr was performed under the proper Vedic Cremation System on the bank of the river. 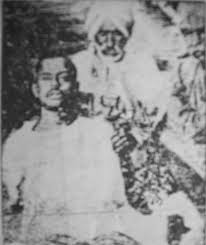 Dead body of Bismil being held by his father; Image courtesy: thearyasamaj.org

Bhagat Singh in Januray, 1929 wrote an article on Kakori in magazine ‘Kirti’ under the pseudonym name ‘Vidrohi’. This article included a concluding letter from Bismil. The letter is as follows:

“I am very happy. I am ready for what is going to happen on the morning of December 19. God will grant me enough strength. It is my belief that I will be born again to serve the people. Please convey my regards to all. Kindly also convey on my behalf my last Namaskar to Pandit Jagat Narain (the government advocate who tried hard to see that Bismil was awarded a death sentence.) Let him get a sleep soundly with the money stained with our Blood. May God grant him good sense in his old age?”

Interestingly, few know that realizing that he’ll never see independent India during his life, Bismil had penned a poem, wishing to be reborn to serve his motherland again. His poetry is a lamp lighted at the altar of the motherland.”