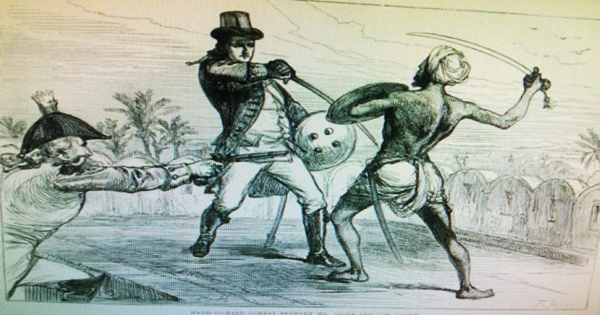 History textbooks hardly find mention of many significant events. Before the Freedom Struggle of 1857, there were numerous small uprisings across the length and breadth of the country. One big uprising needs special mention here. It was the Uprising of 1824 where hundreds of freedom fighters, principally Gurjars, sacrificed their lives. It is an irony that this war of independence of 1824 is not described in History books; rather it finds mention in a historical account by James Grant. Cassell’s Illustrated History of India by James Grant (1822-1887. Vol. 2. Pg 13.) finds a detailed description about the First war of Independence of 1824.

It was the year 1824. The British had, by then annexed a major part of India. Koonja Bahadurpur (presently under Roorkee Tehsil, Haridwar District, Uttarakhand), a well developed village with a small fort was under the riyasat of Raja Vijay Singh. His riyasat extended as far as Saharanpur and Meerut. The raja declared his independence and held siege of the fort. He made Kalyan Singh (Kalua) his general. He started collecting taxes.

On one instance, when the British were transporting their treasury from Jawalapur to Saharanpur, escorted by 200 British soldiers, Kalyan Singh, led by his men, attacked them. The Gurjars looted the treasury and killed a number of the British forces. British forces tried to curb the uprising but in vain. They committed more atrocities against the British, looting them and butchering them.

British forces employed Gurkhas for this task and marched towards Koonja Bahadurpur. In the words of the author of the book Cassell’s Illustrated History of India, “…On the 2nd of October 1824, an express reached Deyrah from Mr. Grindall, the local magistrate of Saharanpore, stating that part of the district has risen in rebellion that upwards of 800 men principally Goojurs, headed by a notorious freebooter named Kower, had taken possession of the ghurry of Koonja, in that neighborhood and was committing every species of atrocity. He announced his advent as Kali, the last of the Hindoo avatars, for the purpose of putting an end to the reign of foreigners. Mr. Grindal solicited the aid of 200 rank and file of the Sirmoor Battalion, which had been formed of disbanded Nepaulese in 1815; and this detachment instantly marched, under Captain Young (commanding the corps) accompanied by the Hon Frederick Shore, of the Bengal Civil Service, who with his accustomed zeal and love of enterprise, marched with the little band. Mr. Grindall joined the detachment at Secunderpore with 150 men of the Sirmoor Battalion, attended by Lieutenant Debude, of the Engineers and Dr. Royle, as volunteers.”

“After a forced march of 36 miles, these forces reached the scene of action in the Deyrah Doon, a valley through which the Ganges flows in the form of a stream, full of green islets, and fordable with difficulty, and where the forests abound with elephants, tigers, leopards, black bears, and striped hyenas.”

“The rebels were found drawn up outside the fort and along the skirts of the village of Koonja in fighting order, and they instantly opened fire upon the advancing column, which was quickly led to the attack by Captain Young…..”

A fierce fight ensued between the Gurjars and the British army outside the fort. The walls of the fort were high and Captain Young’s target was to enter the fort. Escalade was impossible, as there was neither detachment nor ladders. And they had no gun to blow open the gate. On Mr. Shore’s suggestion, a large tree was cut and its branches were lopped off by the Ghorkhas using their sharp kookeries. They obtained ropes. Using the ropes and the tree, they rammed against the gate. They made several attempts. At every attempt the Gurjars attacked, thrusting long spears through the opening of the iron gate of the fort. The British opened fire. In the fifth attempt, the British succeeded in making an aperture in the gate, but only large enough to admit of entrance in a stooping posture.

Captain Young dashed through the opening attended by two soldiers and followed closely by Shore and others. In the words of the author, “As he rushed on, without having time to look about him, a man sprang from a corner of the rear, and aimed a desperate blow at the back of his neck, and would assuredly have killed him, but the quick eye of Shore, who had just reared his tall form after bursting through the aperture, saw his friend’s danger, and with the full swing of his sword, sent the lifeless trunk of the Goojur bounding past Young.” Due to the effect of the blow by the Gurjar mutineer, Young’s neck turned blue.

A fierce fight ensued thereafter. 150 Gurjars were slain by the British forces inside the fort. Meanwhile, a ‘gallant, athletic and gigantic pehelwan’, as described by the author, who by then had killed seven soldiers of the British forces using his sword and shield, came to the notice of Shore. He was involved in combat at the flat roof of a house adjoining the ramparts.

Frederick Shore approached him for a combat on the rooftop. A fight ensued between the two. In the words of the author, “The Indian was perfectly naked, with the exception of a middle cloth, and he was gaily and fantastically painted, ‘for this, his last battle’. He was armed with a sword and a shield and scornfully addressed Shore as they advanced towards each other. ‘What you too have turned sipahee to fight the Goojurs?’. The next moment their swords were seen flashing in the setting sun; but, in the combat, Shore fought at a great disadvantage, his shield having been rendered nearly useless by the loss of its corded handle, and he could only grasp the two rings to which the latter had been attached.”

During the fight Shore was heavily wounded. Kalyan Singh, the Gurjar ‘pehelwan’ was able to hit several blows with his sword on Shore’s chest. He was about to kill him when Captain Young turned up. He opened fire at Kalyan Singh. In the author’s own words, “At this time Captain Young reached the place where the two were fighting and levelled his ‘Joe Manton’ at the Goojur’s breast; the first barrel flashed in the pan, but a ball from the second pierced his chest just as he was making a desperate cut. The sharp blade swept under Shore’s unsteady shield and gashed his side at the moment his antagonist fell back dead.” Shore never recovered from his wounds. In the words of the author, “His originally robust constitution never recovered the wounds received at Koonja, though he survived till 1837, when he died at Calcutta, in his thirty-eighth year.”

In the fight in the fort with the Gurjars, 37 British forces lost their lives and several were wounded. They captured Raja Vijay Singh; he was later hanged at Saharanpur. Hundreds of Gurjars lost their lives. Raja Vijay Singh’s head and Kalyan Singh’s waist (dhad) were hung on the main gate of Dehradun Jail. Later the head was transferred to Thomson College (University of Roorkee).

The British captured the local Gurjars, especially men, of Koonja Bahadurpur. In a single day, 100s of them were hung by neck until death on a huge tree. This tree still contains the iron rings (kunde) where they were hung.

Salute to the sons of the soil, who sacrificed their lives for the freedom of the motherland.

Related post: Nag Bhat I, the Gurjar Pratihar King Badly Defeated Arab Forces; History Has No Record of this Victory

Featured image courtesy: Illustration from Cassell’s Illustrated History of India by James Grant. The image shows Shore in a hand-to-hand sword combat with the Gurjar pehelwan while Captain Young aiming his gun and shooting the latter.