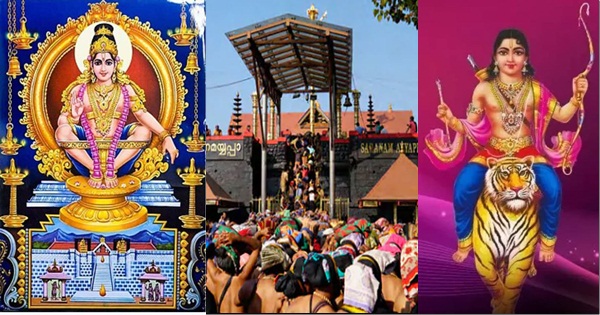 Harivarasanam Vishvamohanam… Whenever this melodious song sung by Yesudas is played, it has such soothing, mollifying and tranquilizing effect on me. Makes me wonder how it would be to listen to this song standing in Ayyapa Sannidhanam in Sabarimala, one evening while it is being played as a lullaby for Lord Ayyappa and the temple doors are slowly closed for the night.

The imagination itself feels divine. No wonder every year thousands of ‘Kanni Swami’s” (First time devotees) are added to the ever growing sea of devotees. As per one estimate last year during ‘Mandala Puja’ that is from November 2017 to January 2018, a phenomenal Five crores devotees visited the Ayyappa Sannidhanam. They reached Sannidhanam after undergoing 41 days of penance, continence living frugally, walking, then trekking for days. Then they arrive at the temple. Such is the devotion attached to this unique pilgrimage.

It was not a family outing for these ‘Swamis’. May be some members were elderly ladies but physically fit to endure the arduous pilgrimage. Five crores devotees mainly from South India observed continence, penance, maintained frugal living for forty days before reaching the Sannidhanam of Lord Ayyappa. What is the motivation to undergo such physical ordeal. Such intense devotion passed on from person to person, generation to generation and only intensifying every passing day. What is behind this unprecedented phenomenon?

Who is Lord Ayyappa actually? Is he a myth, concept, phenomenon, reality? All of it yes… and the line is very thin and hazy between each of them.

The legend goes like this. As per Bhagavata Purana, after Devi Chamundeshwari kills Mahishasura. His sister Mahishi starts taking revenge for the killing of her brother. Now it was her turn to be killed. It was not easy to do so because she had the coverage of a boon from Lord Brahma that she cannot be killed by anybody born out of a union of male and female. So to solve this situation a boy takes birth by the union of Shiva and Mohini. Mohini is none other than Maha Vishnu. So this ‘Harihara puthra’ at the age of twelve would kill Mahishi but before that he should grow up in a king’s palace.

King of Padalam Dynasty Rajashekhar prays ardently for a son and his prayers are answered. In his dream God orders him to go to the river Pampa the next morning and on the bank of the river he would get a baby boy who should be brought up as prince up to the age of twelve. There after the boy would receive certain orders for which he has been specially created.

The child has a gem studded bell around his neck thus he was named Manikantan. After he was declared the prince of the dynasty, the queen gives birth to a son and now she wants her son only to be the heir apparent of the dynasty. With the connivance of certain ministers she hatches a plan to get rid of Manikantan. She feigns sick and the cure is to give some medicine along with the milk of tigress. Manikantan who is now twelve years old  volunteers to go to the forest to fetch the milk. He enters Sabarimala forest alone. Very soon the tigers of the jungle surround him and there is an instant bond between them and Manikantan, he starts petting them, caressing them starts riding on them.

Meanwhile, he has to perform his ordained role, that is to kill Mahishi. After searching for many days he finds her and kills her. A surprise awaits him now, a beautiful girl emerges out of the dead body. Mahishi was a princess but due to some ill deeds she is cursed to be a demoness but she was assured eventually ‘Hariharaputra’ would come and release her asura rupam and she would regain her original beauty. So now beautiful ‘Maalikapurathamma’ emerges.
She requests Ayyappa to marry her.

Lord Ayyappa, since he was destined to be Brahmachari politely declines her offer. He then goes on to explain to her that he was created to destroy the evil in the world and to look after his devotees. However just to be nice to her he says he would marry her after the last ‘Kanni Swamy’ (first time devotee) visits him. She would have to wait till then. She agreed to wait and till date she is waiting only. Every day hundreds of ‘Kanni Swamies’ are newly emerging.

Now Ayyappa returns to the kingdom riding on a tiger with a streak of tigers following him. The scene is enough to drive away all the connivers. King Rajashekhar realised that he is not an ordinary human. Ayyappa bids farewell to him and asks the king to build a temple atop the Sabarimala hill. And one more temple nearby for Maalikapurathamma too who would be waiting for him.

One version is, it was Maalikapurathamma who requests the devotees not to disturb Lord Ayyappa’s celibacy and pleads that women in the age of reproductive stage should not visit Ayyappa’s temple. The women devotees agree wholeheartedly.

In Vishnu Purana it is said that Lord Parushurama had built Five Dharma Shasthas for Lord Ayyappa.
In Kalathpuzha as Balaka
In Aryankavu as Brahmachari
In Achankovil as Grihastha
In Sabarimala as Vanaprasthi
And in Poonambala as Yogi, where he appears once a year as “Makaravilukku” on the day of Makara Sankranti.