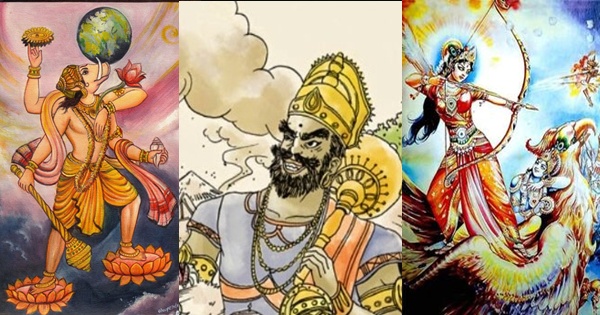 During Satya Yug, prior to Treta Yug and Dwapar Yug lived an Asur king called Hiranakshya. He created chaos in the three worlds, terrorizing humans, saints, and the Devs alike. The Devs, led by Indra, approached Vishnu for help. Hiranakshya, cognizant of the plan, hid the earth by pushing her off her axis so that Vishnu could not find her.

When Hiranakshya touched Bhumi Devi and pushed her, an Asur took birth out of the contact. He was Narakasur, also called Bhaumasur. Bhumi Devi plunged deep inside space. It was then that Lord Vishnu incarnated as Varah, a boar. Before the earth plummeted further, the Lord held the earth in his horns and pushed her back in her axis. This was followed by Vishnu’s killing of Hiranyaksha.

After the death of Hiranyaksha, Bhumi Devi approached Vishnu and told him about the birth of Narakasur. Vishnu told her that Narakasur would be as powerful as Hiranakshya. Apprehensive and worried, Bhumi Devi asked if he would be arrogant like his father to which Vishnu replied in the positive. Vishnu also told her that Narakasur would be more powerful than his father and that only she, his mother, could facilitate his death.

As Narakasur grew up, he came in contact with another arrogant Asur called Banasur. Initially, Narakasur was calm, poised, and followed what was right. Later, under the influence of Banasur, he became arrogant. Following Banasur’s advice, he did severe penance to please Lord Brahma so that he could rule all the three worlds. It took hundreds of years for Narakasur to please Brahma. One day Brahma appeared before Narakasur.

“O son, you have suffered a lot to please me. None can follow your way of penance. Ask me any boon, my son.”

“I need no wealth or powers, O Lord,” said Narakasur, bowing his head in reverence. “I am born to Bhumi Devi. If I am to die one day, it should happen in the hands of Bhumi Devi, my mother.”

“You did severe penance only to ask for this boon?”

“Yes. No one other that my mother can put an end to my life, O Lord.”

“I grant your wish, Narakasur. You are already powerful. Do use your powers for good,” said Brahma and disappeared.

“He granted me the boon I asked for, that my mother Bhumi Devi would be my destroyer!”

“A mother will never kill her child! Have you ever heard of a mother killing her son no matter what wrong he did?”

Narakasur overthrew another Asur king called Ghatakasur of Pragjyotishpur (now comprising a part of Assam) and established his kingdom there. He attacked several more kingdoms. Whoever bowed to his sovereignty and recognized his kingship were spared and reinstated as kings of their respective kingdoms. Those who did not recognize his kingship were killed. Narakasur then attacked heaven. He made 16000 celestial nymphs his captives, brought them to Pragjyotishpur and imprisoned them in his palace.

He did not even spare Aditi, the mother of the Devs of heaven. When Narakasur attacked, Aditi wore a pair of precious earrings which glowed in the dark. He was so merciless that he pulled the earrings forcibly from Aditi’s ears without any hesitation. He kept the earrings is his palace.

As years passed by Narakasur stopped creating chaos. By Brahma’s boon, he did not die though several generations perished in front of him. The 16000 celestial nymphs remained his captives. Aditi’s earrings were still in his possession.

This article is an excerpt from Blue Vanquisher – Krishn Trilogy Book 2 by Manoshi Sinha. Only Narakasur’s mother Bhumi Devi could kill him otherwise he would remain immortal! Narakasur was indeed killed! Who killed him? Bhumi Devi? Did Bhumi Devi incarnate to give shape to this objective? Did Krishn help Bhumi Devi so that he could free the 16000 celestial nymphs from Narakasur’s captivity. Read Blue Vanquisher to know more. 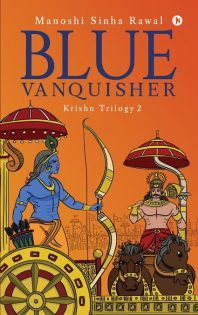