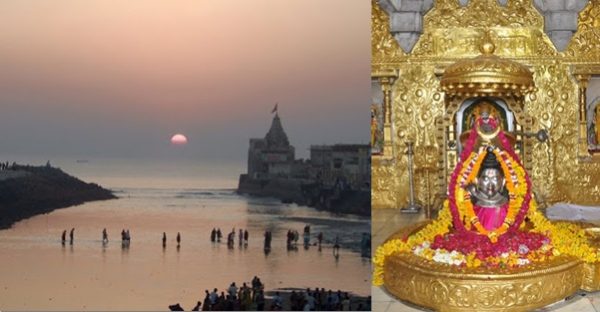 If we look from historical angle, the present Somnath is not the original place of Jyotirling. The Saraswathi river joined the sea at Kutch. The first temple of Somnath was thus probably at a place called “Koteshwar”. It is in Kutch, near Sir creek and borders Pakistan. Sir creek is a disputed territory between India and Pakistan. Fortunately, Koteshwar is in India.

At Koteshwar, we see merging of land, water (sea and river), sun, space/sky and air (land is projected in to sea [known as spits/cape in geography], sea and river are merging). That’s why it was called the ‘Mukti kshetra‘. Because our body is assumed to be made of pancha bhutas and it has to be dissolved back in to these natural forces. Once body is dissolved, atman can move forward for ‘liberation’. As Saraswathi was “river of life”, near and dear ones used to come to Koteshwar to pay tribute to their departed souls.

Today, we see a small pond here (Daya Kund). The pond gets filled by sea water during high tides (as there is no river, they did this arrangement). People do come here (may be ones who unknowingly inherit the tradition) for doing last rites in this pond (so it is still a Mukti Kshetra or Mukti Sthal). BSF guards this area very closely. There is water shortage and hence, the place is not hyped or promoted. 2 Kms from the temple, there is a sweet water pond called “Narayana sarovar”. It is just next to sea, but holds sweet water. This Sarovar has the legend of “few drops of Amrutha” falling from the Amrutha pot, while being ferried by Garuda (probably indicating to a last surviving means, after Saraswathi dried up). 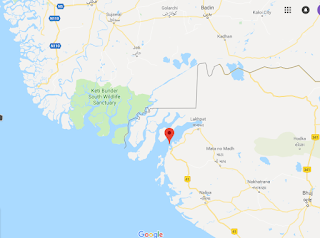 Sir creek area provides the proof, as it looks like a mouth of a river, although no river flows there today. Compare the area with Sundarban area, where mighty Ganges merges with sea (photos are given for comparison). The fragmented Sir creek points to a great river merging with sea here. Sindhu was a smaller river then, and the mighty fragmentation you see between Karachi to Koteshwar was due to Saraswathi. Today Sindhu has bulged and does empty its water at Keti-Bunder. Just for comparison, there is no river mouth (fragmented land mass due to river force fragmenting land mass) at Somanth.

The local story says that, Ravan brought the Jyotirling from Kailasa and was tricked to leave it here. What ever it is, the lingam here is important and it became Koteshwar today. The place became a pilgrimage point. It is like, going with the dead, as far as possible to see them off. The meeting of 5 forces at Koteshwar gave rise to the belief that, it is here, atman will enter the next stage and it could be an entry to Kailasa.

However, Saraswathi river shifted east (due to Himalayan disturbances). As, the river shifted, it met sea at today’s Somanath (At Patan also they say, Saraswathi was flowing. Today they say, locals out of respect kept Saraswathi name to local rivers and hence you see Sarasawathi at different places. But that is not how it is). As life line river, it is important to call a place ‘Mukti Sthal’, a new temple came up here as the new Jyotirling. The focus shifted from Koteshwar to Somnath. 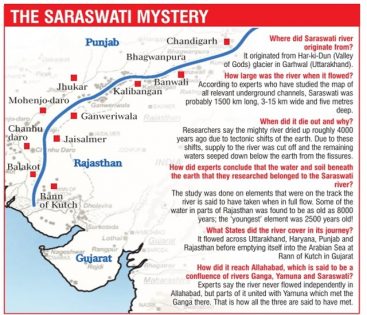 There is a Triveni Sangam at Somnath (meeting of 3 rivers and one is Saraswathi, which they say is gupt now). This sangam place is again a famous ‘Mukti Sthal’. During earthquake, floods and river destruction, Koteshwar probably got submerged in sea. May be that was another reason to abandon it and construct new temple at Somnath. The submerged Koteshwar was forgotten all together as the original “Jyotirling” place.

Unfortunately, the tributaries of Saraswathi shifted further east, causing them to merge with Yamuna and Ganges. Ganges took the place of Saraswathi. As the migrated people settled in new found land, majority of the priestly class of people from Somnath, who were habituated to perform “Mukti rites” got settled in Kashi/Varanasi. Although the sea is missing, river Ganges substituted for water.

Sun at Koteshwar was replaced by “fire”. So, Ghats on the river front came up, where they could burn the bodies. Priestly class continued their process at Kashi itself. For the process to continue, a new Jyotirling temple came up at Kashi. So, Kashi became the primary Mukti Sthal (replacing earlier Koteshwar and Somnath). The status of Kashi is maintained since then as the primary ‘Mukti Sthal’ and a place of Jyotirling for Hindus.

In fact the migrated people settled at 7 places along the Karnataka coast line. All seven are called “Saptha Mukthi Kendras” even today. Gokarna is the primary one (known to people). The Ravana story of Gokarna is same as the one at Koteshwar, Kutch, Gujarat. All these 7 places contain Shivalingams, a replica of the original Jyotirlingams. (How can so many things happen co-incidentally??).

The migrated priestly class on ships settled down south in western part of the country (and did not go east), as they wanted setting sun to do “Mukti process”. Other priestly class people, who did migrate towards east, later came down south (majority settled near Godavari river) and then at a later point came further down to Karnataka. We can see huge difference in language/customs and tradition between these 2 sects of people, although they all stay in the same area today. 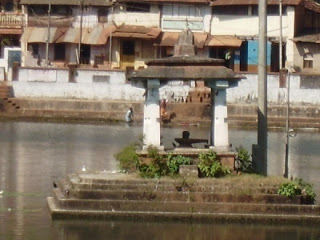 “Aghanashini river” comes and meets Arabian sea at Gokarna. Sun sets here. Mahabaleshwar temple is just on the shores. A pond called “Koti teertha” is there very close to Mahabaleshwara temple. Koti means “crore” in Kannada. May be the pond was constructed by bringing original water from Koteshwar, Gujarat. Guess what, there is a “Lingam” in the center of this pond and it is called “Koteshwara”. So, at Gokarna, technically we still see setting sun, sea, river, sky and air merging together in the backdrop of Mahabaleshwar temple. The idea, still matches with the original ‘Mukti Sthal. Who knows, during that twilight moment, the door to Kailasa may be open [see the beautiful image at Dwarka that illustrates the concept effectively (Gomati river meeting Arabian sea at Dwarka temple)].

As migrated people replicated their place, if we search originality for Gokarna, it may match with Karachi. The Mahalingeshwara Temple may be a replication of “Ratneshwar Mahadev” temple, located at Clifton, Karachi. Karachi-Koteshwar-Somnath is replicated in Karnataka as Gokarna-Koteshwar-Smeshwara. Can it simply be a coincidence?

Now, the sea water has receded and we can see original Koteshwar back. A nice temple is built there (probably somebody inherited the truth and protects it!!). Due to ignorance or due to forgotten history, Koteshwar was saved from invaders. So, our original Somnath is intact. Koteshwar qualify as the best place for a Jyotirling and as a Mukti Sthal. The tropic of cancer, passes here. As sun peaks on tropic of cancer, the place becomes the unique place in India, for receiving maximum sun energy + a sea coast + mouth of a mighty river Saraswathi + the land projecting in to sea, as though merging with it + high winds from sea + vast blue sky meeting the horizon. All 5 forces (wind/water/land/fire (sun)/sky) are to the maximum size here. So, it is the unique and best place. So, there is lot of deep thought behind the first Jyotirling place. The Tropic of Cancer passes through, Ujjain, which also hosts a Jyotirling called Maha Kala (as it was the time reference point).

Dwaraka, Kanyakumari and Rameshwaram are the other places, where we see land tip projecting in to sea (Use google map to survey for the best land area projecting in to sea, you will find these). At Rameshwaram + Dwaraka we do have a Jyotirling. At Kanyakumari, (Cape Comorin) we see both setting sun + rising sun (indicating a rebirth in the womb of a woman). So, we have the “Kanya Kumari” temple at this important place (representation for Shiva’s consort Parvathi). Adi-Shankara called the area surrounding this pinnacle point (Kanyakumari) as “Tra-vida”, that is meeting of land with 3 seas (east/west and south), which later became “Dravida”.

I think other Jyotirlings came up, as land area got fragmented among different kingdoms and people were not allowed to move freely to reach original places. With no other option, they replicated Jyotirlings within their territory (this is my guess, as we need to build history by filling blank places, when concrete proof / logical reasons does not support it).

Probably, the late Harappans visited Koteshwara, like we visit Varanasi today. As we miss Saraswathi, we miss the real action here.

Somnath: Where Faith Triumphs over Fanaticism