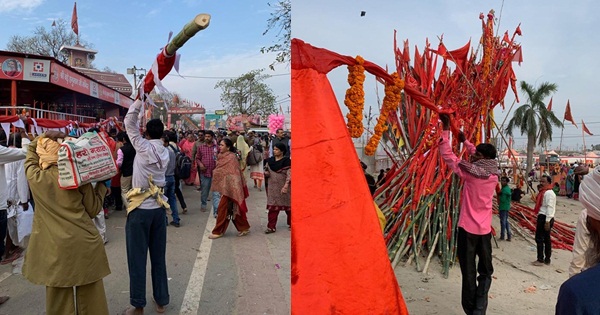 I arrived at the Kumbh just two days before it was to end. The iconic Naga Sadhus, had already departed for Kashi in readiness for Mahashivaratri on Mar 4.

The crowd had ebbed, but there were enough to keep the waterfront throbbing. I walked from the end of Civil Lines Road ogling the variety of faces from every corner of India. Most were fit and nimble rural stock striding briskly towards the river. Rest were mostly small townsmen, less swift than the villagers. I saw, much to my relief, very few of the Indians of the kind who had no sense of who they were. Everyone around me seemed the salt of our earth. I felt a great camaraderie with them all.

I walked on marvelling at the arrangements and the orderliness. Trash cans, toilets, drinking water vends and helpful policemen were everywhere. The vast acres by the river had come through clean after experiencing tens of crores of footfalls.

In a few hours, I finished my snan in the river directly in front of the Bade Hanuman Mandir, taken a row boat to the Triveni Sangam for another snan there and returned to where I had started. 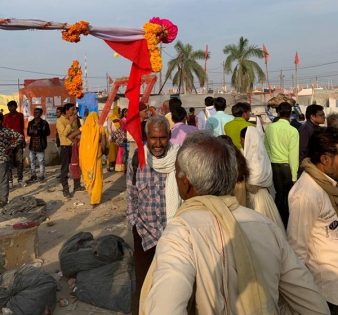 I walked slowly up the gentle slope from the river’s edge and found myself a place to settle down, resting my back against a post. A wave of bliss came over me. Peace reigned all around. The strange silence despite several thousand people around me was only broken from to time by soft announcements from speakers- not intrusive at all. I sat gazing at the row boats in the distance heading towards the Sangam and returning from there.There must have been over a hundred of them out there, plying in eerie silence. I felt very proud I was heir to all that was happening around me just as it must have done for several centuries. I may have sat a couple of hours, enveloped by a great sense of belonging.

Suddenly I quickened. I saw close to the water’s edge, a very tall pole being stood on its end .A red pennant fluttered at its top. Three men had stood it upright. Shortly it was lowered, and the men -and some women- walked off carrying the pole horizontally. A couple of drums attended their progress.

I was curious. What was that? It was the most dramatic thing I had seen that whole day. I sprang to my feet and walked briskly towards them. 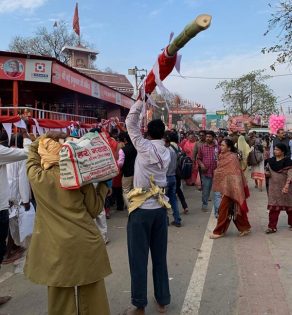 When they were off the sands, an old man pushing a bicycle joined them. On its carrier was a battery driven music system and on its handle, a speaker. Devotional music joined the drums and cymbals. The small procession marched on. Soon, I saw another similar group in some distance. Again the same pole and its pennant, a brisk group of ten or fifteen, drums and bicycle mounted music. Before long, I saw several more spring up all over the waterfront, and briskly heading in the same direction.

What was going on? The vast silent spaces had suddenly come alive with new energy.

In my travels in UP I have always found its rickshaw men the nicest folk for a conversation. They are witty, bold and loquacious. I found one such. He was a wiry man and was in no hurry to hustle me for trade. He explained what I was witnessing.

Every Monday and Saturday villagers from around Prayagraj arrive to fulfil pledges made to Bade HanumanJi. They come to offer their thanks for his help in their difficult times or in thanks for happy tidings. Some come from as far as 100 kM but most are from within 40kM. Bamboo poles they carry are about 30 feet long. It is draped with red cloth. A red pennant bearing a Swastika, is mounted on its thin end and never allowed to touch the ground. Family and friends of the person offering tribute to HanumanJi join in. 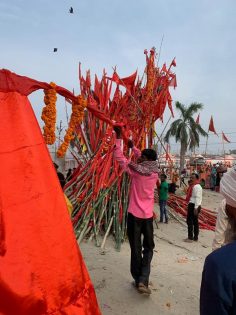 The votive pole is taken to Sangam, the pennant is dipped in the water and then the pole is stood proudly to declare the vow fulfilled; which was the scene that had started me on exploration! Then they resume the march with much fanfare, and head for the Mandir. Some dance in front. Now and then a man will stand the 30 foot upright and wobble it in ecstasy as he marched. Women, children all walk in a brisk clip.

I asked the rickshaw man to pedal me to the Mandir, just to have the great raconteur go on with his tales. He left me near the Mandir with notes on what to watch for and from where. I promised i would as he instructed.

Finally, I asked him what was the rite’s name.

“Iska naam Nishaan hai,” he said and pedaled away, all very friendly.

The contingents began to come thick and fast. There’s a designated opening in the wall of the Mandir into which they may thrust the pole and dip its pennant in the direction of HanumanJi reclining within. There’s frenzied dancing and music as this is done. Retrieving the pole, they march to a nearby yard, lower it and stash it against poles already parked. The next contingent takes its place and the rite is repeated. 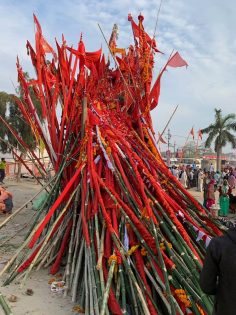 Thus it goes on and on, as the huge gathering stands bewitched. I among them. When I arrived I roughly counted about 50 already in the stash. In the next hour as I stood transfixed watching the pennants arrive, it grew to over hundred.

I found a new confidence rise in me. This is the salt of this land that keeps Dharma alive. A stone’s throw away stood the Allahabad fort. Akbar had come, built the arrogant fort and was gone, as did his tribe. The British came and left. Motilal Nehru of Allahabad founded his dynasty and I sensed its end in the air.

From before all this and all this while, villagers have come twice weekly to connect with Bade HanumanJi to pledge their devotion to him. I doubt if they are even aware of the talking heads on the TV. I am certain they don’t read the New York Times or kindred trash.

As long as these Bharatvasis assert ownership of this land, all will be well.

DV Sridharan says all that he knows of India and Hindusim, he learnt from our rural folks close to the soil.