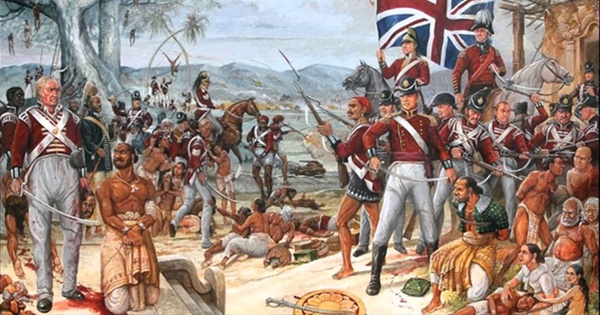 A British friend, who follows my critique of British colonial rule asked, “I agree that the Brits did a lot of terrible things to Indians. One cannot justify colonial rule. However, you cannot criticize today’s Brits for whatever our ancestors did. Your posts fail to make that distinction.”

I replied, “Of course, I cannot hold today’s Brits guilty for the crimes of your ancestors. If I did that then it would mean that I consider guilt heritable. That would be an immoral stance to take. I am critical of Christianity because it immorally considers guilt heritable (which is why the Bible declares all generations of Jews guilty for the crucifixion of Jesus).

However, the crimes of the British colonial rule were terrible. At least 100 million Indians were exterminated. Indian religious and cultural traditions were obliterated and supplanted with the predatory variants of the Brits. Our educational institutions were laid waste to.

If the Islamic rule ushered in caste-based untouchability, the British rule exacerbated it thereby plunging hundreds of castes into untouchability. The Brits sold the Indians into slavery in faraway countries.

Indian ideas were stolen and presented as European ideas which became the foundation of European scientific era. For example, Madhava and Nilakantha invented calculus which was conveniently attributed to Newton and Leibniz.

India’s lands and wealth were stolen and bestowed upon the shameful legacy of the colonial rule, i.e., the Christian churches. The Brits, while departing, delivered Partition riots as the parting shot and took the final dump on India by installing Nehru as PM. All this delayed (or even precluded) India regaining her glory.

Now, the least which is necessary is an honest discussion on the debilitating effects of the British colonial rule. I expect the Brits to express unconditional and open solidarity with the Indians. I expect them to support, in principle (no matter what the outcome would be), the need to pay reparations. I expect them not to even attempt any balancing act, i.e., to claim there were some good things which came out of colonial rule.

If they did that then today’s Brits aren’t culpable for the crimes of their ancestors. Else, they are.

I am intentionally not making the distinction as demanded in the opening paragraph. I do not see any substantial number of Brits complying with the reasonable demands I’ve placed. At best, they mildly criticize the colonial rule while quickly suggesting that India gained too. At worst, they gleefully celebrate the colonial predations and dismiss any discussion on Indians’ sufferings as unworthy of consideration.

“Do not expect subtle niceties from me until you display basic scruples.”