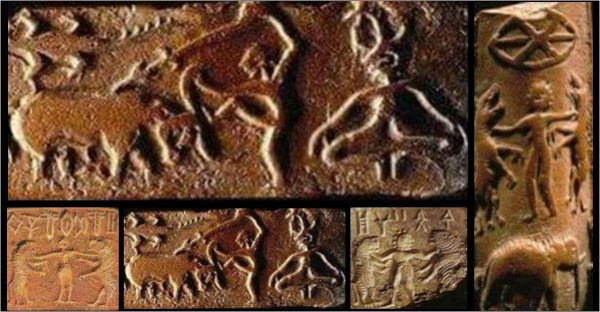 According to the Mahabharata Book 13 Anusasana Parva, and the Skanda Purana, Skanda fought many fierce asuras, three of them being brothers. There are various versions:

– In one version the demon Surapadma changed himself into a mango tree in order escape Skanda, but Skanda split the tree in half with his lance, resulting in two half trunks and… mysteriously also two birds: the rooster and the peacock.

– In another account Skanda fought Taraka and his associate Kiravuncan (or was it Taraka’s brother Mahisha, the versions differ) and he overcame them singlehandedly.

– In another fight he met Mahisha again, Mahisha the Asura King (mahisha here means buffalo) whom he finally killed with his spear.

The central figure in the seals above is often identified as female, especially in the bottom right seal, but that ‘breast’ is probably a damage mark. However, the artist has attempted to portray Skanda’s youth. Skanda (often under the name Kumara) is usually identified as youthful.

“As he lay stretched [just being born] on a clump of heath, the gods with the Rishis, beholding him, became filled with great delight and regarded the great Asura as already slain.” – Mahabharata.

Like many Indian gods Skanda has many names, some of his are: Kanda, Kumara, Kartikeya, Guha, Murugan, Velan, Ahmuvan but also:

– Shadanan (‘six-faced’, as Skanda is often depicted with six faces. Remember he had six mothers).

– Shashthinathan (that name has to do with Skanda’s victory in his fierce battle with Surapadma which is celebrated in South India during ‘Skanda Shashti’.)

Of particular interest are the last two names: Shadanan and Shashthinath… notice the “sh” sounds in their names.

Let’s look at the deciphered inscriptions above.

When we look carefully we notice that they all have the “sh” sound in common: ash, sh, shi.

Could it be that the sounds “ash, sh and shi” have to do with the above mentioned names of Skanda: Shadanan and Shashthinath, the “ash or sh” standing for six? Remember Skanda was six-headed as he was brought forth and brought up by six mothers, the Krittikas.

The two pictures (one horizontal the other vertical) of the collage, are two sides of the same seal: M306A.

It was the fact that they ARE on one and the same seal that made me investigate whether the standing figure could by any chance be Skanda.

The fact that none of the standing figures on the seals above look the way other male and female figures look on other seals (e.g. on the ‘procession’ seals they all have ribboned kind of pony-tails, bangles and most are dressed) but instead these seals show someone with short hair (could even be curly). That made me think it was a youthful person… a young offspring of the six Krittikas and Shiva-Agni-Rudra.

Subsequently, when googling images of Skanda (Kumara, etc.) I was struck by the many youthful depictions and characterizations of him. I quote:

“Justifying his name Kumara, he is shown here as a handsome youth, bright like the morning sun. The lance (Vel) he holds in his left hand is said to have been a gift from his mother Parvati. The right arm is raised in the abhaya mudra, or the gesture of fearlessness. He wears a karandamukuta – the high crown which signifies a deity’s exalted status – and which here eminently suits the youth who was destined to be the commander of gods.” Ref 1

By the way, Kenoyer is careful not to assign a gender to this seal’s standing figure (in spite of the possible breast), but he also calls the two animals lions, now IMO that is not right, but I think he calls them lions and not tigers because tigers are not mentioned in the Rig Veda. However the Skanda Purana and Mahabharata mentions tiger(s) as well as lion(s) in similar versions of the same story theme.

The above seals though IMO show tigers…

Lilith / Lilitu definitely has lions, it is part of her story, lions licked her tears… I Quote:

About the elephant on this seal, as far as I know elephants do not come up in Lilitu’s tales.

Ganesh by the way is Skanda’s brother (both a-sexually fathered by Shiva). This brother is involved in the lovely story of Skanda the “youthful god’s amorous relationship with Valli” a young country-girl. Ganesh appears as a frightening elephant to scare the young girl into the arms of Skanda who though, in this story, had disguised himself as an old man (swami) to get closer to the girl.