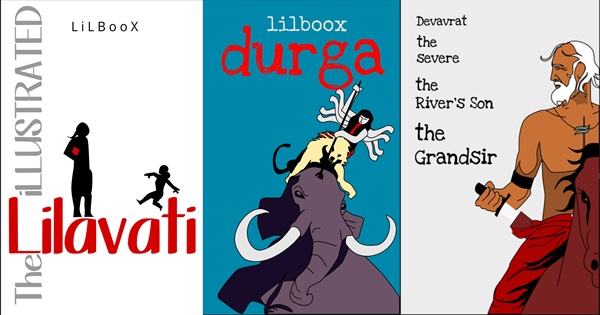 A PhD from Princeton University, he studied about the properties of noise. As the stock market has the same properties, he was able to build a career as a Wall Street mathematician. At the same time, the Indology archives of Princeton and the ever growing internet kindled his interest in the legacy of Indian literature, which he decided to combine with his other love – drawing comic books.

In 2015, Somdip Datta released his first book, The Illustrated Lilavati. Lilavati was the daughter of the great mathematician Bhaskaracharya. Her horoscope indicated that she would remain unmarried unless married at an auspicious moment. Bhaskara devised a water clock to alert him of the correct time. In her curiosity, Lilavati went to look at the device and a pearl from her bridal dress accidentally dropped into it, and stopped the flow. The auspicious moment for the wedding thus passed unnoticed leaving a devastated father. It was then that he promised his daughter to write a book in her name, one that would remain till the end of time. In 1150 AD, Bhaskara wrote that book. The book Lilavati immediately superseded previous works and became the standard textbook on arithmetic in India. It retained that status over many centuries. Hundreds of manuscript copies, and many translations and commentaries on the book were produced by astrologers and poets from Rajasthan to Orissa, from Kerala to Agra.

Bhaskara used lively examples with birds, bees, flowers, merchants, kings and Gods. The book was translated to English in 1816 by John Taylor, a government surgeon in Bombay. An excerpt from this translation:

The square root of a number of bees,

and also eight ninths of the whole,

and a female bee buzzed

responsive to the hum of the

tell me the number of bees?

Bhaskara blended poetry and mathematics in his work. Somdip Datta added visual arts to that mix and created The Illustrated Lilavati, which introduces this classic in 106 illustrated panels, with crisp and colorful images, and many insights to the history of Indian mathematics, like the Indian method of multiplication on a dust-board, meters of Sanskrit poetry and the purity of gold.

While the Lilavati is targeted at middle school students, Somdip’s second book appeals to younger children as well. However, there is no upper age limit to who can enjoy any of his colorful books.

The second book Durga by Somdip Datta is an ode to Durga, written shortly before the 2015 Durga Puja. In 40 colorful panels, it describes the story of how Mahish-asura subjugated heaven and earth. How Durga was born to put an end to Mahish-asura. The story of Rama’s battle in Lanka. We also learn about the Gods and Goddesses in Durga Puja and about the lunar calendar of the month of Durga Puja and Diwali. This book is listed free to showcase the novel graphical style of Somdip’s books.

Somdip’s most ambitious project is The Lilboox Mahabharata, a six part adaptation of the Mahabharata. Two parts have been released so far. The first part, Seeds of War, traces the origins of the Kuru and Panchala Kingdoms, beginning with the drying up of the Saraswati river. Then it takes us through the story of the river’s son Devavrata, the emerging rivalry between the Kuru cousins, and the bitter fallout between the Panchala King Drupada and Guru Drona.

In the second book, Ambition, conflicts and alliances of ambitions take shape. It traces the roller coaster journey of the five Pandava brothers, where they survive many perils and end up with a powerful alliance. The remaining four titles in the series are Riches and Rags, Hide and Seek, The Civil War, and The Uncivil War. 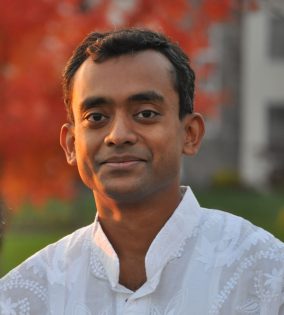 The epic Mahabharata has been adapted and rewritten over and over by many translators and editors. Somdip’s Mahabharata uses a visual canvas to present the undercurrent of emotions, depth of characters, and a multi-cornered geopolitical context. The graphics is minimalist to focus the attention of the reader to what matters most, in a scene, or a map.

Sometimes the story is carried forward in pictures alone, without any words. There are numerous maps, colorful but simple, that tie together the geography of ancient India with the evolution of kingdoms. History has never been so accessible. The characters wear unique necklaces, and the kingdoms have unique colors in their flags and attire, to help keep track of the multitude of characters and kingdoms in this epic.

The focus of the story by Somdip Datta is twofold. Firstly, to bring out the core story, the circumstances and motivations of the key characters, without getting lost in the labyrinth of side tales. Somdip asks the readers to look at how the ambitions and emotions of the key characters drive the story line, without the tales of previous incarnations, and curses and predictions. Secondly, to make the reader keenly aware of the geopolitics of the land, which is strongly tied to the personal agendas of the main characters. In the series, Somdip refers to the fertile plains between the Ganga and the Yamuna river as the heartland. The story starts with the history of the Kuru and the Panchala kingdoms, which between them divide the heartland. The geography of other kingdoms will be explained, as they come to play in subsequent books.

All his books are published by “www.LiLboox.com” which specializes in electronic graphic novels that draws material from Indian literature. The graphics and print is large enough to be read comfortably in a smartphone. They are is available in itunes, Google play and Kindle. iPhone and iPad users can open the ibooks app and search for by Somdip Datta. Android users can use Google Play Books or the kindle app for android. The books can also be enjoyed in color kindle devices. Click here to buy books by Somdip Datta.